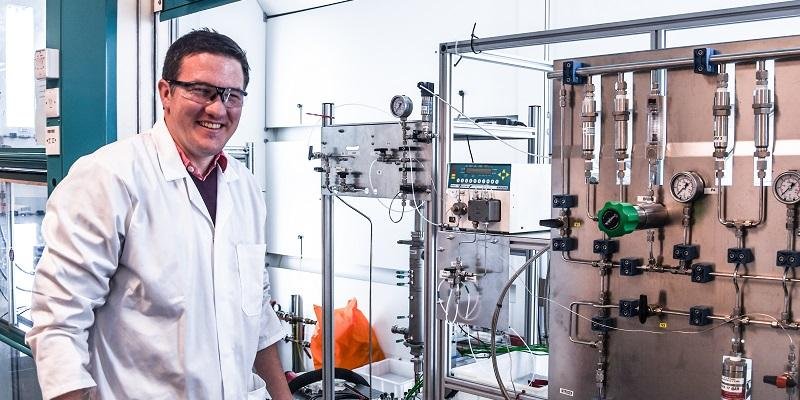 The engineer leading a project to develop a prototype "lab-bot" says it will reduce the time it takes to identify and synthesise molecules for new medicines – a process that can take years as scientists refine the shape and property of target molecules. In some cases, chemists have to test a million molecules before finding the right one. Dr Richard Bourne, Associate Professor in the School of Chemical and Process Engineering at the University of Leeds, says the initial aim of the project is to find medicinally-active chemicals that can be used to treat arthritis and cancer.

Dr Bourne has been awarded a Senior Research Fellowship by the Royal Academy of Engineering to further the investigation. Fellowships from the academy recognise world-class research and industrial collaboration. The award complements a £3.5 million grant made by the Engineering and Physical Sciences Research Council to Dr Bourne and his academic partners to further ideas around "cognitive chemical manufacturing".

Dr Bourne said: “This technology has the potential to fundamentally change the way drugs are discovered. Discovery chemists are involved in a ceaseless challenge to synthesise new drug molecules to the point where they can be successfully tested for medical activity. But the process of reaching that point can be very slow, and that has consequences for people who are waiting for new drugs that could help alleviate painful and chronic conditions. If the process is rushed, then the new treatments may not be developed and new types of molecule will not be evaluated. Our research at Leeds is about finding a balanced approach, so new molecules are found that are safe and reliable but are discovered in a timely manner. We believe by harnessing artificial intelligence we can achieve that accelerated approach.”

Dr Bourne is one of three new Senior Research Fellows announced by the Royal Academy of Engineering.

Professor Karen Holford, Chair of the academy’s Research Committee, said: “I am delighted to welcome these leading researchers to join us. Working closely with their industrial partners, each awardee will establish a world-leading research group in their field of engineering that will ultimately help to generate real economic benefits.”

Partners who could hardly be further apart – yet have a lot in common – have united to fight resistant pathogens. The International Consortium for Anti-Infective Research (iCAIR) is based in Germany and Australia – separated by nearly 16,000 km as the crow flies. This has not stopped the research cooperation from achieving its objectives: the development of new agents against infections.

Dr Bourne’s team is collaborating with a number of pharmaceutical companies including AstraZeneca, Pfizer and GSK.

Modern drug discovery involves synthesising compounds that can act on diseases at a molecular level, perhaps by blocking proteins that are harmful. In a suite of laboratories, Dr Bourne and his colleagues are optimising the drug discovery process by bringing together machine learning, automation and an idea called continuous flow chemistry. The result is a robot-controlled system that can autonomously change the parameters of a reaction until the optimal or best results are achieved.

In flow chemistry, reactions take place in narrow pipes rather than a traditional laboratory flask or reactor. In the system at Leeds, the reaction is contained in pipes that are smaller than a millimetre in diameter – making it possible to have greater control of the reactants. An artificial intelligence system continuously monitors the outcome of the reactions, compares the results from other experiments held in an online database and then alters the parameters – such as temperature or pressure – until the optimal result is achieved.

The approach is not only about discovery chemistry. The aim is that the approach could be scaled up and run by "production robots" for manufacture. "Lab-bots" have been used at Leeds in recent years to optimise the synthesis of a cancer drug called Osimertinib, which was developed by AstraZeneca. The robotic laboratory was able to identify the optimum manufacturing process after a run time of 26 hours. In comparison, the conventional approach would have taken scientists around two weeks of intense laboratory experimentation. Pioneering research combining artificial intelligence and automated platforms is already being used in industry to identify better ways of manufacturing medicines.

A diagnostic marker reduces antibiotics use