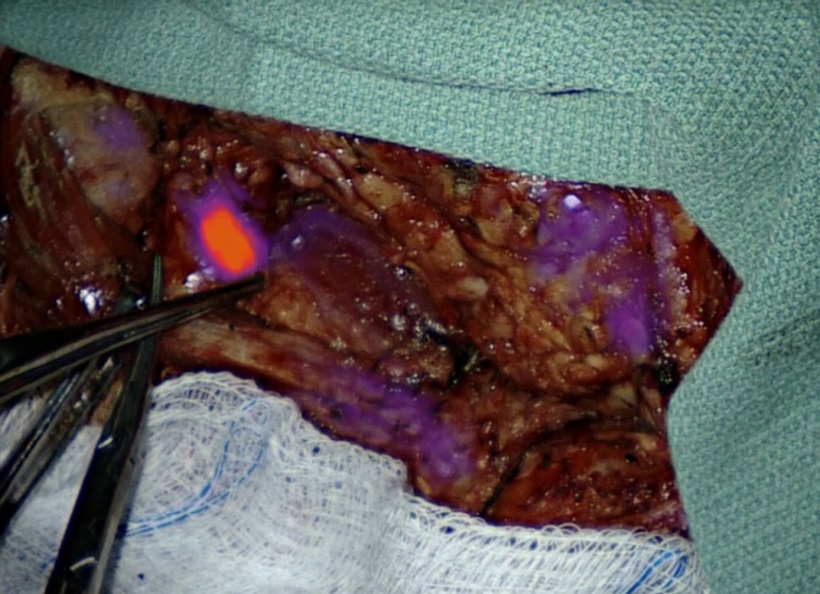 Led by Jason G. Newman, MD, FACS, an associate professor of Otorhinolaryngology in the Perelman School of Medicine at the University of Pennsylvania, the study is the first in the world to look at the effectiveness of intraoperative molecular imaging (IMI) of lymph nodes in patients with head and neck cancer. Because the tumors glow, surgeons get real-time guidance to help them take out as much cancer as possible and leave non-diseased tissue alone.

Head and neck cancers make up about four percent of all cancers in the United States, according to the National Cancer Institute. There are several different types affecting the mouth, throat, voice box, sinuses, and salivary glands. Roughly 75 percent of these cancers are caused by tobacco and alcohol use, but a growing number are associated with human papillomavirus (HPV). Overall, researchers estimated more than 65,000 Americans will be diagnosed with head and neck cancers in 2017. Treatment can include surgery, radiation, chemotherapy, or a combination.

When these cancers spread or come back, lymph nodes are one of the most commonly involved areas. Lymph nodes serve as filters for the immune system, and many head and neck cancers spread there early in their course. Cancer in these lymph nodes can go undetected during surgery, meaning the procedure might leave microscopic cancerous cells inside a patient’s body. To minimize that risk, doctors often remove potentially suspicious lymph nodes during surgery, but that removal comes with the risk of damage to healthy tissue. “By using a dye that makes cancerous cells glow, we get real time information about which lymph nodes are potentially dangerous and which ones we can leave alone,” Newman said. “That not only helps us remove more cancer from our patients during surgery, it also improves our ability to spare healthy tissue.”

It’s a concept already in practice for other disease sites in the Abramson Cancer Center’s Center for Precision Surgery, led by Sunil Singhal, MD, the William Maul Measey Associate Professor in Surgical Research. Singhal’s team has adopted the approach in lung cancer and brain cancer, and now Newman and his team are the first to specifically use IMI to look at lymph nodes. They’re using a contrast agent known as indocyanine green (ICG) – a fluorescent dye that was approved decades ago by the U.S. Food and Drug Administration for use in tracking blood flow. “We know that tumors hold onto this dye longer than most other tissues, so if it is administered to a patient several hours before surgery, the tumors will still glow long after it has disappeared from the rest of the body,” Newman said.

Newman says this trial will set the stage for the use of fluorescent dyes in head and neck cancer surgery and neck lymph nodes.  This will provide guidance on whether ICG is the most accurate dye specifically for lymph nodes, or if another contrast agent may make more sense. “As we build this program, we’ll learn which dyes work best for which cancers,” he said. Newman says this study can also help doctors use imaging to understand patterns of lymph node metastasis, which could help oncologists and surgeons predict and anticipate which patients are at the highest risk of spread or recurrence.