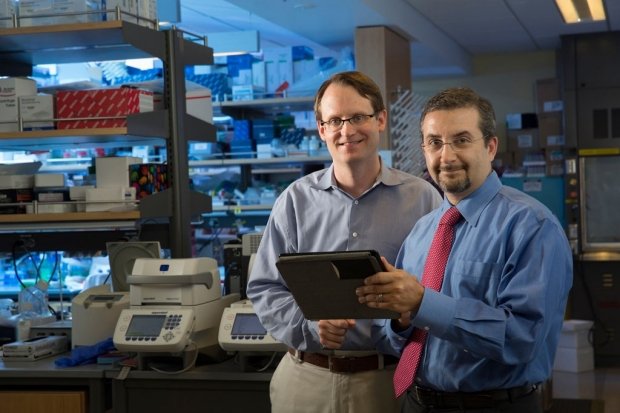 Maximilian Diehn (left) and Ash Alizadeh led a study that found a blood test could show whether patients with a type of blood cancer were responding well to initial treatment or needed more agressive treatment.

A blood test can predict which patients with a type of cancer called diffuse large B cell lymphoma are likely to respond positively to initial therapy and which are likely to need more aggressive treatment, according to a multicenter study led by researchers at the Stanford University School of Medicine.

The study validates the clinical usefulness of tracking the rise and fall of circulating tumor DNA, or ctDNA, in the blood of patients before and after therapy. It suggests that clinicians may soon be able to determine how a patient is responding to treatment within days or weeks of starting therapy rather than waiting until therapy is completed five to six months later.

"Although conventional therapy can cure the majority of patients with even advanced B cell lymphomas, some don't respond to initial treatment," said associate professor of medicine Ash Alizadeh, MD, Ph.D. "But we don't know which ones until several months have passed. Now we can predict nonresponders within 21 days after the initiation of treatment by tracking the levels of ctDNA in a patient's blood. We can look earlier and make a reliable prediction about outcome."

"These findings confirm the value of tracking cancer genetics in the blood in real time."

Diffuse large B cell lymphoma, a blood cancer, is the most common type of non-Hodgkin lymphoma. Because it is highly biologically variable, patients vary widely in their response to treatment. Although most people are cured by conventional therapy, about one-third are not. Being able to predict early in the course of treatment those who will need additional or more aggressive therapies would be a significant boon to both clinicians and patients.

Circulating tumor DNA is released into the blood by dying cancer cells. Learning to pick out and read these DNA sequences among the thousands or even millions of other noncancerous sequences in the blood can provide valuable insight into the course of the disease and the effectiveness of therapy. Recently, Diehn and Alizadeh showed that ctDNA tracking can also predict lung cancer recurrence weeks or months before any clinical symptoms arise.

"Combined with our recent study on lung cancer, our new findings speak to the power and likely utility of using ctDNA to assess how well cancer treatments are working in an individual patient. We are very hopeful that the approach will ultimately be extensible to most if not all cancer types," associate professor of radiation oncology Maximilian Diehn, MD, Ph.D. said.

In this study, the researchers tracked ctDNA levels in 217 people with diffuse large B cell lymphoma who were treated at six medical centers—three in the United States and three in Europe. For each patient, they compared levels of ctDNA before treatment began with the levels after the first and second rounds of conventional chemotherapy. They then correlated those changes with each patient's outcome.

They found that ctDNA was detectable prior to the initiation of therapy in 98 percent of the people studied. And, as would be expected, the amount of ctDNA in the blood dropped in all patients once treatment began. But the precipitousness of the decline varied. Those people whose ctDNA levels dropped a hundredfold after the first round or three-hundredfold by the second round were much more likely to live 24 months or more without experiencing a recurrence of their disease than those whose ctDNA levels declined more slowly.

"We found that ctDNA levels serve as a very sensitive and specific biomarker of response to therapy within as few as 21 days," structor of medicine David Kurtz, MD, Ph.D., said. "Every year, about 30,000 people in the United States are diagnosed with diffuse large B cell lymphoma and, for the most part, they're treated with six cycles of combination therapy. But we know that not all patients need six cycles. A large fraction could be cured with fewer cycles—maybe even just two. If we can identify those people who are responding extremely well, we could spare them additional treatments. Conversely, we could intensify the therapy or seek other options for those who are not responding as well as we would have hoped."

he researchers are encouraged that they saw a similar correlation between changes in ctDNA levels and outcomes in patients from each of the six participating medical centers, confirming the global usefulness of the analysis. They're currently planning a clinical trial based on the results, and they're eager to learn whether they can make similar predictions about the prognoses of patients other than those with diffuse large B cell lymphomas.

"These findings confirm the value of tracking cancer genetics in the blood in real time," Alizadeh said. "We are thinking about how to use the tools to best benefit patients, and are very excited to test this approach in other types of cancers."