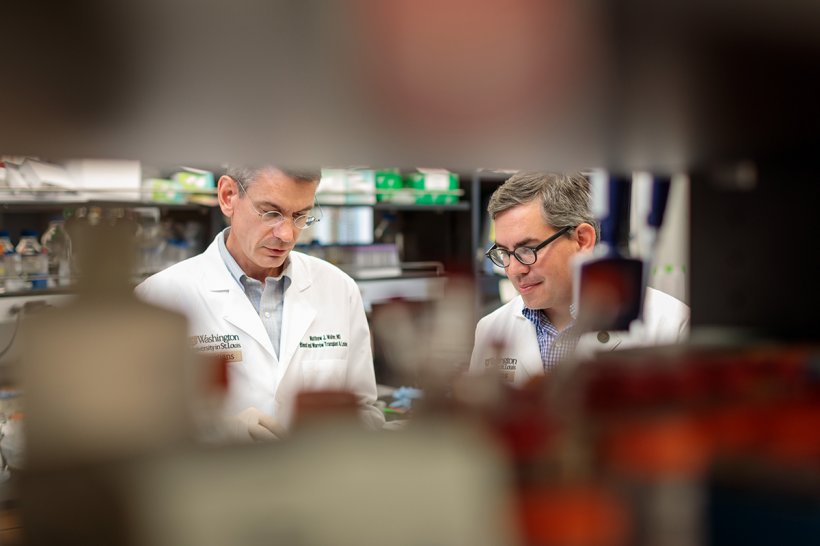 Matthew Walter, MD, left, and Eric Duncavage, MD, work in the lab. They and their colleagues have shown that DNA sequencing of blood cells relatively soon after a stem cell transplant to treat myelodysplastic syndrome can predict which patients are at high risk of disease recurrence.

“The way doctors usually monitor the severity of this cancer is by looking at the blood cells under a microscope and deciding what percentage of them appear abnormal — it’s very subjective,” said senior author Matthew J. Walter, MD, a professor of medicine at Washington University School of Medicine in St. Louis.. “A genetic analysis is a much more precise method of measuring how many blood cells are cancerous. It also lets us find abnormal cells at earlier time points after a stem cell transplant, when there are fewer cancerous cells to find. The earlier we can detect that the cancer is coming back, the more time we may have to intervene.”

MDS is difficult to diagnose. Symptoms often are related to low blood cell counts. Many people with the disease may never know they have it because they may experience only nonspecific symptoms such as fatigue or shortness of breath. But others may have a more aggressive form that is eventually fatal. About one-third of MDS patients progress to acute myeloid leukemia, a fast-growing blood cancer that also can be fatal.

The only treatment that has the potential to cure MDS is a stem cell transplant, which involves clearing the cancerous cells from the body and replacing the blood-forming cells with those of a healthy donor. To prepare for transplantation, doctors first clear the cancerous blood cells from patients with radiation and chemotherapy. Doctors may choose to reduce the aggressiveness of this regimen for older patients who have other medical conditions and are more likely to die from complications of the transplant. But the reduced intensity regimen also is more likely to leave some of the cancer behind, increasing the risk of disease recurrence.

“Using our sequencing method, we’re identifying residual tumor cells before a pathologist could see them under the microscope and before a patient develops symptoms."

In this study, the researchers performed DNA sequencing to identify mutations in the cancerous cells before stem cell transplantation in 86 patients with MDS. Of these patients, 35 experienced disease recurrence at a median of 141 days after transplant, and 51 did not develop a recurrence within a median follow-up of about one year.

Mutations found before the transplant established a genetic “fingerprint” of each patient’s cancer. About one month after a stem cell transplant, the researchers sequenced each patient’s blood cells again to see if they could still detect the cancer’s fingerprint. The patients whose cancer fingerprints could be detected 30 days after the transplants had about four times the risk of disease recurrence in the first year after their transplant compared with patients with no genetic sign of cancer cells (53 percent versus 13 percent recurrence, respectively), according to the researchers.

To identify cancer fingerprints, the investigators first used a broad sequencing approach to detect mutations in over 20,000 genes. Because this approach would be impractical in the clinical setting, the researchers then narrowed their analysis to include only 40 genes. Though the 40-gene test was not able to identify a cancer fingerprint in as many patients as looking at all genes, it still identified most high-risk patients and demonstrated that a similar test could be practical for future use in patients.

“Using our sequencing method, we’re identifying residual tumor cells before a pathologist could see them under the microscope and before a patient develops symptoms,” said Walter. “At that moment, there may be time to intervene in ways that could delay the cancer from coming back or potentially prevent it completely. “Now that we have detected mutations early and shown that it predicts a higher risk of recurrence, we want to determine the best course of action for those high-risk patients,” he added.

Induced pluripotent stem cells (iPSC) are suitable for discovering the genes that underly complex and also rare genetic diseases. Scientists from the German Cancer Research Center (DKFZ) and the…