The approach could allow those in need of such transplants, including leukemia and lymphoma patients, to be treated with fewer donor stem cells while limiting potential adverse side effects.

HSCs give rise to the many different cell types found in blood and can be used to treat a variety of diseases, including multiple myeloma, leukemia, and blood disorders such as sickle cell anemia. HSCs can be harvested from a suitable donor and then transplanted into a patient, where, after establishing themselves in the bone marrow, they can generate healthy blood cells. 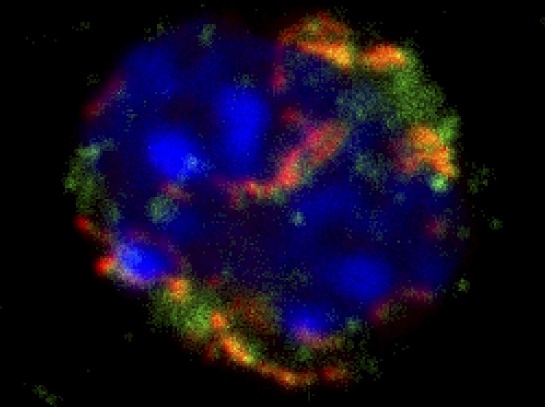 When transiently expressed in HSCs, BCL-XL temporarily protects the cells from apoptosis and enhances their ability to be transplanted from one mouse to another. This microscopy image shows the successful introduction of BCL-XL (green) into a cell labeled for its nucleus (blue) and mitochondria (red).
Kollek et al., 2017

The transplantation process is stressful for HSCs, however, and many of them die before they can successfully ensconce themselves in the patient’s bone marrow. This limits the effectiveness of HSC transplantation, delaying the resumption of blood cell formation—increasing the risk of infection or bleeding—or even causing the transplant to fail completely. HSC death is a particular problem if the number of donor stem cells is low to begin with. Umbilical cord blood, for example, generally contains insufficient numbers of stem cells for it to be used as a source of HSCs for transplantation into adult patients.

HSCs die through a process called apoptosis, driven by two proteins called BIM and BMF. Permanently inhibiting these two proteins prevents HSCs from dying and improves the efficiency of HSC transplantation in mice. But mice receiving these apoptosis-resistant stem cells soon develop autoimmune disease and/or lymphomas because the HSCs, and the blood cells they produce, do not die when they are supposed to. “Thus, inhibiting apoptosis transiently during the stressful period of transplantation could be an attractive strategy to improve transplantation outcome without increasing the risk of long-term adverse effects,” says Dr. Miriam Erlacher of the University Medical Center of Freiburg.

Erlacher and colleagues isolated HSCs from mice and infected them with a genetically engineered adenovirus that transiently produces a human protein called BCL-XL that inhibits BIM and BMF. These virally infected HSCs were resistant to apoptosis for the 7–9 days that BCL-XL was expressed, and, upon transplantation into recipient mice, their ability to establish themselves in the bone marrow and produce new blood cells was greatly enhanced. Moreover, because the transplanted HSCs only expressed BCL-XL for a few days, they didn’t promote the formation of lymphomas in recipient animals.

Adenoviral infection is slightly toxic to HSCs, however, so Erlacher and colleagues developed an alternative approach in which purified BCL-XL could be introduced directly into isolated HSCs. This second method also provided temporary protection from apoptosis and improved the cells’ ability to undergo transplantation. “Our findings suggest that transiently inhibiting apoptosis by manipulating donor HSCs increases the fitness of these cells without elevating the risk of adverse pathology,” Erlacher says. “Transient apoptosis inhibition is therefore a promising approach to reduce the risk of graft failure and improve HSC transplantation outcomes.”

A DNA-based analysis of blood cells soon after a stem cell transplant can predict likelihood of disease recurrence in patients with myelodysplastic syndrome (MDS), a group of cancerous disorders…

Genetically engineered fibers of the protein spidroin, which is the construction material for spider webs, has proven to be a perfect substrate for cultivating heart tissue cells, MIPT researchers…