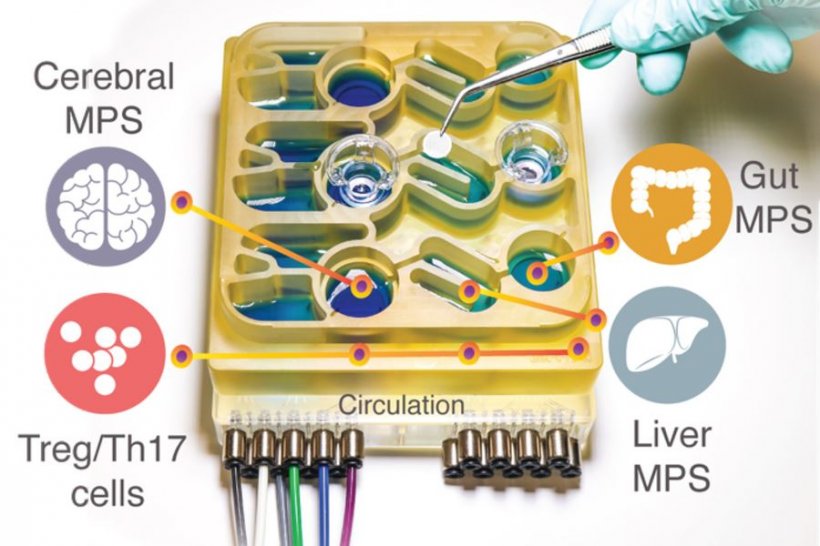 MIT researchers have developed an “organs-on-a-chip” system that replicates interactions between the brain, liver, and colon

Image: Courtesy of the researchers. Photo by Martin Trapecar, MIT

Modeling these complex interactions in animals such as mice is difficult to do, because their physiology is very different from humans’. To help researchers better understand the gut-brain axis, researchers at the Massachusetts Institute of Technology (MIT) have developed an “organs-on-a-chip” system that replicates interactions between the brain, liver, and colon.

The team presented their findings in the journal Science Advances.

Using that system, the researchers were able to model the influence that microbes living in the gut have on both healthy brain tissue and tissue samples derived from patients with Parkinson’s disease. They found that short-chain fatty acids, which are produced by microbes in the gut and are transported to the brain, can have very different effects on healthy and diseased brain cells. “While short-chain fatty acids are largely beneficial to human health, we observed that under certain conditions they can further exacerbate certain brain pathologies, such as protein misfolding and neuronal death, related to Parkinson’s disease,” says Martin Trapecar, an MIT postdoc and the lead author of the study.

For several years, Griffith’s lab has been developing microphysiological systems — small devices that can be used to grow engineered tissue models of different organs, connected by microfluidic channels. In some cases, these models can offer more accurate information on human disease than animal models can, Griffith says. In a paper published last year, Griffith and Trapecar used a microphysiological system to model interactions between the liver and the colon. In that study, they found that short-chain fatty acids (SCFAs), molecules produced by microbes in the gut, can worsen autoimmune inflammation associated with ulcerative colitis under certain conditions. SCFAs, which include butyrate, propionate, and acetate, can also have beneficial effects on tissues, including increased immune tolerance, and they account for about 10 percent of the energy that we get from food.

Scientists from the German Cancer Research Center (DKFZ) and the Hebrew University in Jerusalem demonstrated in mice that intestinal bacteria reprogram DNA activity in cells of the gut mucosa and thus have a considerable impact on the development of the healthy gut.

In the new study, the MIT team decided to add the brain and circulating immune cells to their multiorgan system. The brain has many interactions with the digestive tract, which can occur via the enteric nervous system or through the circulation of immune cells, nutrients, and hormones between organs.

Several years ago, Sarkis Mazmanian, a professor of microbiology at Caltech, discovered a connection between SCFAs and Parkinson’s disease in mice. He showed that SCFAs, which are produced by bacteria as they consume undigested fiber in the gut, sped up the progression of the disease, while mice raised in a germ-free environment were slower to develop the disease. Griffith and Trapecar decided to further explore Mazmanian’s findings, using their microphysiological model. To do that, they teamed up with Jaenisch’s lab at the Whitehead Institute. Jaenisch had previously developed a way to transform fibroblast cells from Parkinson’s patients into pluripotent stem cells, which can then be induced to differentiate into different types of brain cells — neurons, astrocytes, and microglia.

More than 80 percent of Parkinson’s cases cannot be linked to a specific gene mutation, but the rest do have a genetic cause. The cells that the MIT researchers used for their Parkinson’s model carry a mutation that causes accumulation of a protein called alpha synuclein, which damages neurons and causes inflammation in brain cells. Jaenisch’s lab has also generated brain cells that have this mutation corrected but are otherwise genetically identical and from the same patient as the diseased cells. Griffith and Trapecar first studied these two sets of brain cells in microphysiological systems that were not connected to any other tissues, and found that the Parkinson’s cells showed more inflammation than the healthy, corrected cells. The Parkinson’s cells also had impairments in their ability to metabolize lipids and cholesterol.

It seems that short-chain fatty acids can be linked to neurodegenerative diseases by affecting lipid metabolism rather than directly affecting a certain immune cell population. Now the goal for us is to try to understand this

The researchers then connected the brain cells to tissue models of the colon and liver, using channels that allow immune cells and nutrients, including SCFAs, to flow between them. They found that for healthy brain cells, being exposed to SCFAs is beneficial, and helps them to mature. However, when brain cells derived from Parkinson’s patients were exposed to SCFAs, the beneficial effects disappeared. Instead, the cells experienced higher levels of protein misfolding and cell death. These effects were seen even when immune cells were removed from the system, leading the researchers to hypothesize that the effects are mediated by changes to lipid metabolism. “It seems that short-chain fatty acids can be linked to neurodegenerative diseases by affecting lipid metabolism rather than directly affecting a certain immune cell population,” Trapecar says. “Now the goal for us is to try to understand this.”

The researchers also plan to model other types of neurological diseases that may be influenced by the gut microbiome. The findings offer support for the idea that human tissue models could yield information that animal models cannot, Griffith says. She is now working on a new version of the model that will include micro blood vessels connecting different tissue types, allowing researchers to study how blood flow between tissues influences them. “We should be really pushing development of these, because it is important to start bringing more human features into our models,” Griffith says. “We have been able to start getting insights into the human condition that are hard to get from mice.”

The 'thermostat' that prevents our brain from overheating

The mechanisms by which the body measures temperature and regulates its own body heat are vital, but still poorly understood. The discovery of the first heat sensor on nerve cells in the skin, for…

Some blood lipid biomarkers linked to cardiovascular disease risk are also associated with a lower risk of amyotrophic lateral sclerosis (ALS) suggest the findings of a large epidemiology study. ALS…