Although the new American Society of Breast Surgeons guidelines recommend not using routine MRI in new cancer patients, it is crucial for radiologists to understand surgeons’ needs and know in which cases MRI can bring value over other modalities to help detect breast cancer (BC), according to Sardanelli, He has reviewed the topic extensively and notably took part in a study comparing sensitivity of MRI vs. mammography to detect multifocal multicentric BC (Sardanelli et al, AJR 2004), dubbed the ‘absolute sensitivity’ study.

Sardanelli and co-researchers identified all false negatives and false positives of MRI using mastectomy with a 5-mm pathological examination of the whole breast as a standard reference. ‘Based on the analysis of 188 cancer lesions, sensitivity of MRI was significantly higher (81%) than that of double reading mammography (66%) while positive predictive value was not significantly different (about 70%). Many other studies confirmed the high diagnostic performance of breast MRI in the preoperative setting,’ he said.

MRI is usually the second or third imaging test after a suspect is spotted on a mammogram or ultrasound, to visualise T-extension and identify satellite or contralateral lesions. A more recent multicentric international study demonstrated that preoperative MRI clinically offers, sensitivity as high as 95% and specificity between 90 and 97% (Sardanelli et al, Invest Radiol 2016). 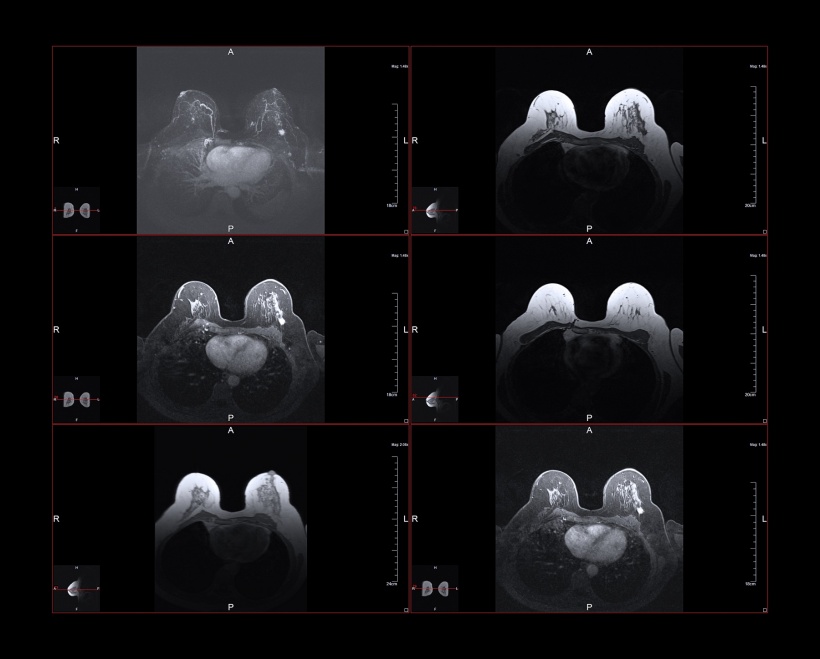 MRI’s strength is to detect cancers that are biologically relevant. In a study at Memorial Sloane Kettering Center in NYC (Iacconi et al, Radiology 2016), 76% of cancers picked up by MRI were invasive, 25% were larger than 1-cm, 23% larger than the known cancer index, and 5% biologically more important. ‘This data matters because we are more and more aware as radiologists that our task is not to detect all the cancers but really those that are biologically meaningful,’ Sardanelli explained. ‘MRI can give a clear idea of what the disease extension. The diagnostic performance is not under discussion, but rather why not accept a test with such a high performance in preoperative setting?’ Sardanelli questioned.

Surgeons may have had good reasons for not accepting a highly sensitive and specific test in the preoperative setting, he explained. ‘It was demonstrated long ago that even if you have conservative treatment and whole breast radiotherapy, you don’t have a difference in survival in comparison to mastectomy. So, there is a possible rationale for suspecting that, with MRI, you could have unnecessary mastectomies, i.e. over diagnosis and over-treatment.’

We don’t have the direct solution, especially when we consider the different aims: estimation of T-extent, detection of ipsilateral cancerous lesions; screening of synchronous contralateral cancers

A second point, he added, is the non-negligible risk of positive margins and re-operation when a strictly conservative treatment is performed, reported to be as high as 20% or more. Here MRI could give information enabling surgeons to be more precise in tissue removal, reducing the re-operation rate.

About eight years ago, Sardanelli established indications for breast MRI within the European Society of Breast Cancer Specialists (EUSOMA) (Sardanelli et al, Eur J Cancer 2010). A multidisciplinary group concurred on using preoperative MRI for these indications: newly diagnosed cancer and high-risk women; mammography/US discrepancy of more than 1-cm in women over 60; and for eligibility to partial breast irradiation (PBI). This last indication has been confirmed by a meta-analysis (Di Leo et al, Radiology 2015) showing that MRI contradicted verdict in 11% of the cases a patient was deemed eligible for PBI based on conventional imaging. ‘It’s a pity that MRI is not largely used for this purpose. Thus, we offer PBI to several women that should undergo whole breast irradiation and probably also negate PBI to other women who could benefit from reducing radiation’ Sardanelli pointed out.

‘These EUSOMA indications still hold', Sardanelli added, but he has since received new feedback. ‘Surgeons told me that MRI is often already performed for diagnostic purposes and that they had to work with this information anyway. So you cannot cancel MRI when it was used to detect cancer in high-risk women, and you must use that data also when MRI detects cancer for problem solving, including pathological nipple discharge, after NAC, or to detect otherwise occult primary BC,’ he said. ‘High-risk (so-called B3) lesions at imaging-guided needle biopsy could also be another important indication for MRI. Exploiting its high negative predictive value, we can use MRI to do less surgery, not more.’

To apply evidence-based rules to preoperative MRI is tough and more studies are needed. ‘We don’t have the direct solution, especially when we consider the different aims: estimation of T-extent, detection of ipsilateral cancerous lesions; screening of synchronous contralateral cancers.’

Several studies show that researchers usually know what happens in terms of therapy after MRI, but not what the therapy plan was before using the modality. Preliminary results of the MIPA study, which compares patients who received preoperative MRI with patients who didn’t in about 30 highly qualified centres, are now available for about 2,500 patients.

‘MRI does not prompt mastectomy but, paradoxically, mastectomy prompts MRI. So MRI is rightly used by surgeons as a confirmation tool for mastectomy,’ Sardanelli said.

Francesco Sardanelli, professor of radiology at Milan University and director of the radiology unit at San Donato Hospital in Milan, Italy, also directs the European Network for Assessment of Imaging in Medicine and is editor-in-chief of European Radiology Experimental.