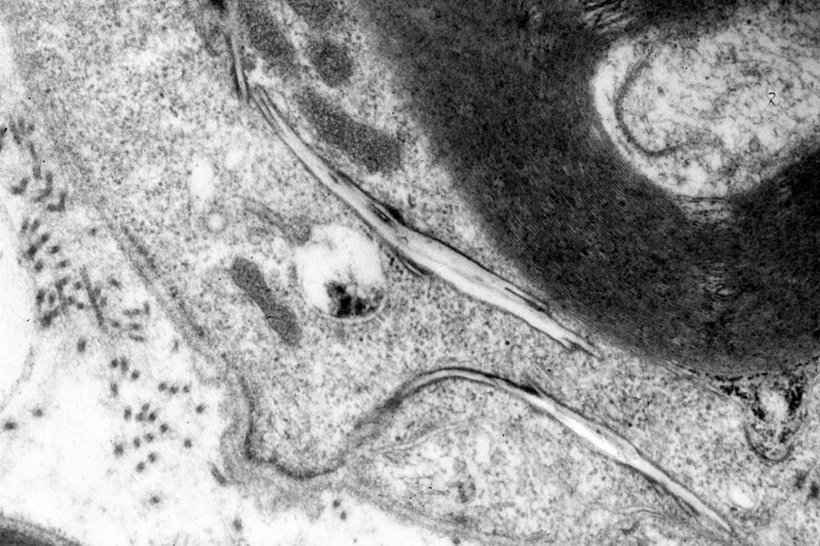 An electron microscope image showing how cholesterol accumulates in a crystalline-like shape (centre) in certain nerve tissues when transport processes are disrupted.

Cholesterol is a vital cell building block in humans and animals, and an integral part of the so-called cell membrane. This boundary layer separates the interior of the cell from the neighbouring cells and the surrounding environment. By means of certain proteins, it ensures that various chemical messengers can enter or exit the cell. In addition, cholesterol is the precursor of various hormones and bile acids. The level of cholesterol in the blood is also associated with numerous diseases, in particular of the cardiovascular system, but also with the very rare but particularly serious so-called lysosomal storage disorders.

For many years, researchers at the Institute of Biochemistry at Kiel University (CAU) have been investigating areas such as the intracellular transport of cholesterol, and which processes and proteins are involved in this. Thus, in 2013 they succeeded in characterising a protein which is centrally involved in these processes, the so-called LIMP-2 protein, and described its molecular blueprint. The resulting spatial model of the protein surprisingly revealed a tunnel structure, which in line with other proteins indicated a possible transport function of LIMP-2. In research work conducted jointly with international colleagues, including from Zhejiang University and the University of Helsinki, the Kiel research team has now proven the involvement of the LIMP-2 protein in cholesterol export from lysosomes, the cell organelles which break down many kinds of biomolecules. Thus, the researchers described a previously unknown method of cholesterol reduction inside cells. The scientists recently published their findings in the scientific journal Nature Communications.

A range of new biomarkers and diagnostics for precision cardiovascular medicine were outlined in a session at the British Cardiovascular Society annual conference held recently in Manchester. Speakers from King’s British Heart Foundation Centre looked at how mass spectrometry allows clinicians to measure large numbers of proteins simultaneously, discussed a new biomarker for cardiac ischaemia…

The key focus of the Kiel biochemistry research team led by Professor Paul Saftig is the role of lysosomes. These organelles in human and animal cells are responsible for the transport as well as the conversion and degradation of various substances, including cholesterol. It was already known that a particular protein is responsible for the transport of cholesterol from the lysosomes. "The striking tunnel structure of our newly characterised protein grabbed our attention," said biochemist Saftig regarding the starting point of the current research. "Through our experiments, we have now been able to confirm that LIMP-2 is actually responsible for an alternative mechanism of cholesterol transport," continued Saftig.

The international research team obtained evidence for the function of the LIMP-2 protein tunnel using various methods. With light microscopic analysis, the researchers were able to essentially catch the cholesterol 'red-handed': thanks to a fluorescent marking, it could be seen leaving the tunnel. In addition, electron microscope images even showed how cholesterol accumulates in certain nerve tissues as soon as the LIMP-2 pathway is not available. A functional gene analysis also revealed that the deactivation of the genetic information responsible for the LIMP-2 protein led to a disruption of the cellular cholesterol balance. In this case, the cells increasingly activate signals which indicate a cholesterol deficit that could lead to a problematic accumulation of cholesterol, which may be involved in the pathogenesis.

“In our new work, we were able to describe an additional pathway which is involved in cholesterol regulation," said Saftig regarding the importance of the new publication. "The increasingly precise understanding of the cellular transport and distribution processes will help us in future to find starting points for new treatments," continued Saftig. Therefore, the scientists hope in particular to be able to develop drugs to combat the lysosomal storage disorders. In a follow-up step towards this goal, the Kiel researchers initially want to clarify all the different functions of the seemingly redundant pathways in the intracellular transport of cholesterol.

Since 1986, the CAU has shared a partnership with Zhejiang University in Hangzhou, eastern China, involving student exchanges as well as regular scientific cooperation. The new biochemical findings are also a result of this German-Chinese cooperation, which particularly benefits the early career researchers involved: two of the authors completed reciprocal stays abroad at each other’s partner university, and worked on the research topic both in Kiel and in Hangzhou. This piece of work is therefore an example of how intensive international research collaboration can advance fundamental research, and potentially also its translation, for example into therapeutic applications.

Red and processed meat: not so bad for our health, but...

Most people can continue to eat red and processed meat as they do now. A major study led by researchers at McMaster and Dalhousie universities has found cutting back has little impact on health. A…