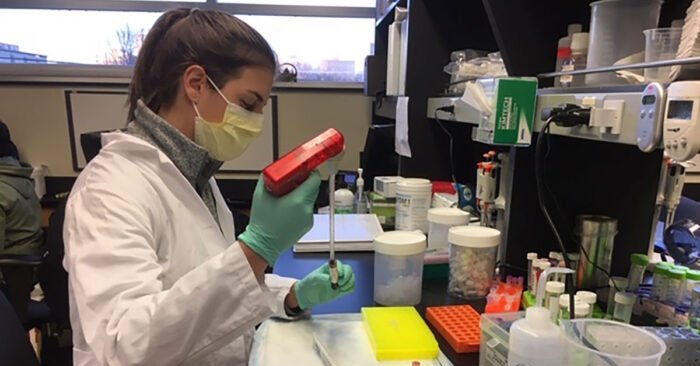 Nadja Pejovic, a visiting medical student and co-first author of a study on the liquid biopsy, works with a sample in the lab of Aadel Chaudhuri, MD, the study's senior author

Such a biopsy can detect lingering disease and could serve as a guide for deciding whether a patient should undergo further treatments due to some tumor cells evading an initial attempt to eradicate the cancer.

While a few liquid biopsies have been approved by the Food and Drug Administration, mostly for lung, breast, ovarian and prostate cancers, none has been approved for colorectal cancer. Patients in this study had what is known as oligometastatic colorectal cancer, meaning each patient’s cancers had spread beyond his or her original tumor but only to a small number of sites. Such patients undergo chemotherapy to shrink the tumors before having surgery to remove whatever remains of the primary tumor. There is debate in the field about whether, after initial therapy, oligometastatic cancer should be treated like metastatic cancer, with more chemotherapy — or like localized cancer, with more surgery plus radiation at those limited sites.

Contributing to the problem is that doctors have a limited ability to predict how patients will respond to early chemotherapy, especially since most patients don’t have access to cancer genome sequencing to identify the DNA mutations in their original tumors. “Being able to measure response to early chemotherapy without prior knowledge of the tumor’s mutations is a novel idea and important for being able to determine whether the patient responded well to the therapy,” said senior author Aadel A. Chaudhuri, MD, PhD, an assistant professor of radiation oncology. “This can provide guidance on how to treat oligometastatic disease. For example, if the liquid biopsy indicates that a patient responded well to the early chemotherapy, perhaps they should be offered the possibility of more surgery, which could potentially cure their disease. But if they didn’t respond well, it’s likely the cancer is too widespread and can’t be eradicated with surgery, so those patients should receive more chemotherapy to control their disease.”

Liquid biopsies for colorectal cancer detect tumor DNA that has broken free of the cancer and is circulating in the blood and, to a lesser extent, has collected in the urine. The biopsies described in this study are unique compared with other liquid biopsies being developed for colorectal cancer in three major ways. First, most such biopsies have been developed to track metastatic cancers or to verify that local cancers have not started to spread. Second, most liquid biopsies for cancer rely on knowledge of the original tumor’s mutations, to see if those mutations are still present in the blood after therapy. But many patients don’t get the opportunity to have their original tumors sequenced. Instead, the new biopsies rely on detecting DNA mutations in the blood or urine and comparing them with DNA mutations measured in the treated primary tumor, after it’s surgically removed. And finally, the urine biopsy is unique for colorectal cancer as most urine biopsies have been limited to use in cancers of the genitourinary system, especially bladder cancer.

“The levels of circulating tumor DNA that we were able to measure in urine were lower than what we measured in blood, but this is still a proof of concept that it is possible to measure residual disease in a nonurinary cancer in this totally noninvasive way,” said Chaudhuri, who also treats patients at Siteman Cancer Center at Barnes-Jewish Hospital and Washington University School of Medicine. “We will need to develop more sensitive techniques to detect colorectal tumor DNA in urine to make this a useful clinical test. But this is a promising start.”

Based on mutations in the blood biopsy, we could identify patients who might benefit from a type of immune therapy called immune checkpoint inhibitors after their initial therapy is complete

The study showed that lower circulating tumor DNA levels correlated with better responses to early chemotherapy. Indeed, most patients who had undetectable levels of tumor DNA in blood samples also had no measurable cancer in their surgical specimens. There was also evidence that the residual disease detected in liquid biopsies was more predictive of outcomes than residual disease found in the surgical specimens. For example, the researchers described the experience of one man who, after early chemotherapy to shrink or eliminate the tumor, still had detectable cancer removed during surgery. But his blood sample taken that same day showed no circulating tumor DNA. He experienced long-term survival with no cancer recurrence. On the other hand, a woman with no detectable cancer cells in her surgical specimen, removed after early chemotherapy, was found to have circulating tumor DNA in her same-day blood sample. Eight months later, the cancer returned in her liver.

The study suggests that such liquid biopsies could help personalize treatment for oligometastatic colorectal cancer. Beyond identifying patients at high risk of recurrence and helping guide decisions about which traditional therapies should be given, the new study also identified patients who might benefit from immune therapies and other targeted treatments. “Based on mutations in the blood biopsy, we could identify patients who might benefit from a type of immune therapy called immune checkpoint inhibitors after their initial therapy is complete,” Chaudhuri said. “We also found mutations that could be targeted with drugs approved for other cancers. Our current study is observational, but it paves the way for designing future clinical trials that could test some of these potential therapies.”

The enormous potential of liquid biopsy

It is non-invasive, delivers a chance of early diagnosis, prognostic information and sequential monitoring, and, believes Professor Francesco Salvatore, the enormous potential of liquid biopsies has…

Article • Heard at the EBCC11

IBM scientists have developed a new lab-on-a-chip technology that can, for the first time, separate biological particles at the nanoscale and could enable physicians to detect diseases such as…