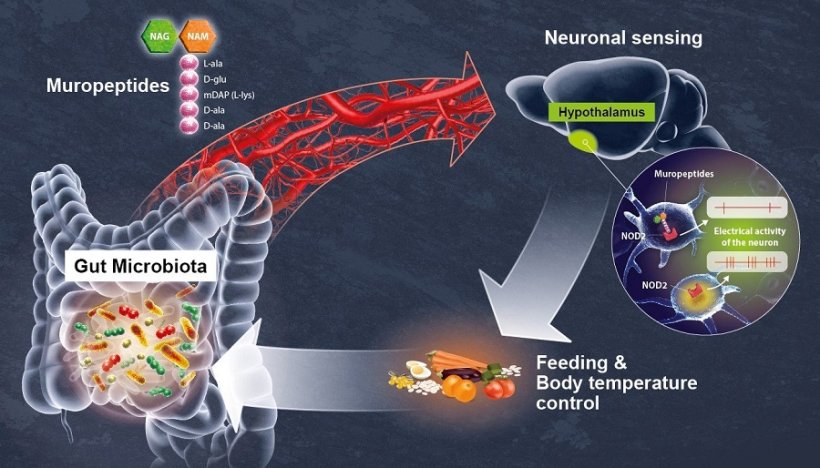 The researchers discovery could lead to new therapeutic approaches for tackling metabolic disorders such as diabetes and obesity.

The scientists focused on the NOD2 (nucleotide oligomerization domain) receptor which is found inside of mostly immune cells. This receptor detects the presence of muropeptides, which are the building blocks of the bacterial cell wall. Moreover, it has previously been established that variants of the gene coding for the NOD2 receptor are associated with digestive disorders, including Crohn's disease, as well as neurological diseases and mood disorders. However, these data were insufficient to demonstrate a direct relationship between neuronal activity in the brain and bacterial activity in the gut. This was revealed by the consortium of scientists in the new study.

Gut microbiota plays a role in the development of Alzheimer

Alzheimer's disease is the most common cause of dementia. Still incurable, it directly affects nearly one million people in Europe, and indirectly millions of family members as well as society as a whole. In recent years, the scientific community has suspected that the gut microbiota plays a role in the development of the disease.

Using brain imaging techniques, the scientists initially observed that the NOD2 receptor in mice is expressed by neurons in different regions of the brain, and in particular, in the hypothalamus. They subsequently discovered that these neurons' electrical activity is suppressed when they come into contact with bacterial muropeptides from the gut. "Muropeptides in the gut, blood and brain are considered to be markers of bacterial proliferation," explains Ivo G. Boneca, Head of the Biology and Genetics of the Bacterial Cell Wall Unit at the Institut Pasteur (CNRS/Inserm). Conversely, if the NOD2 receptor is absent, these neurons are no longer suppressed by muropeptides. Consequently, the brain loses control of food intake and body temperature. The mice gain weight and are more susceptible to developing type 2 diabetes, particularly in older females.

In this study, the scientists have demonstrated the astonishing fact that neurons perceive bacterial muropeptides directly, while this task was thought to be primarily assigned to immune cells. "It is extraordinary to discover that bacterial fragments act directly on a brain center as strategic as the hypothalamus, which is known to manage vital functions such as body temperature, reproduction, hunger and thirst," comments Pierre-Marie Lledo, CNRS scientist and Head of the Institut Pasteur's Perception and Memory Unit.

The neurons thus appear to detect bacterial activity (proliferation and death) as a direct gauge of the impact of food intake on the intestinal ecosystem. "Excessive intake of a specific food may stimulate the disproportionate growth of certain bacteria or pathogens, thus jeopardizing intestinal balance," says Gérard Eberl, Head of the Microenvironment and Immunity Unit at the Institut Pasteur (Inserm).

The impact of muropeptides on hypothalamic neurons and metabolism raises questions on their potential role in other brain functions, and may help us understand the link between certain brain diseases and genetic variants of NOD2. This discovery paves the way for new interdisciplinary projects at the frontier between neurosciences, immunology and microbiology, and ultimately, for new therapeutic approaches to brain diseases and metabolic disorders such as diabetes and obesity.

The findings were published in Science.

Development of effective live bacterial therapeutics may depend more on using and re-introducing native microbes that can stick around than how the microbes are modified.