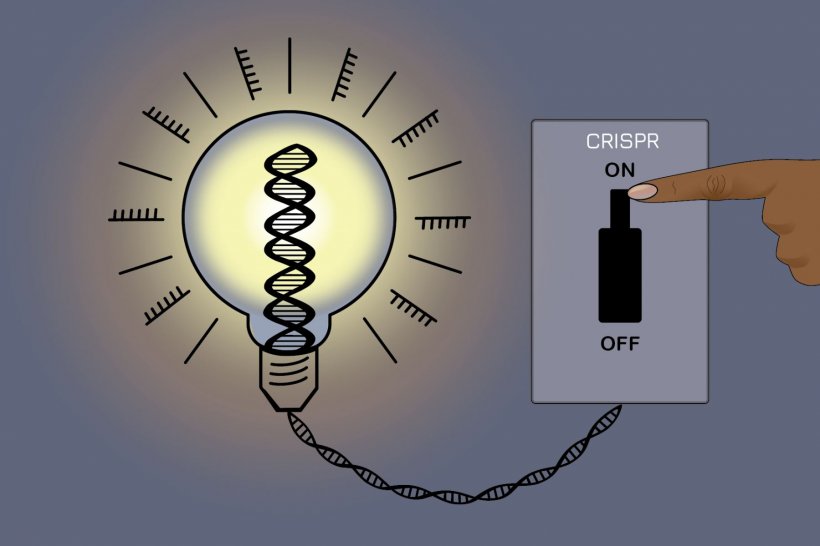 Now, in a paper published online in Cell, researchers describe a new gene editing technology called CRISPRoff that allows researchers to control gene expression with high specificity while leaving the sequence of the DNA unchanged. Designed by Whitehead Institute Member Jonathan Weissman, University of California San Francisco assistant professor Luke Gilbert, Weissman lab postdoc James Nuñez and collaborators, the method is stable enough to be inherited through hundreds of cell divisions, and is also fully reversible. “The big story here is we now have a simple tool that can silence the vast majority of genes,” says Weissman, who is also a professor of biology at the Massachusetts Institute of Technology (MIT) and an investigator with the Howard Hughes Medical Institute. “We can do this for multiple genes at the same time without any DNA damage, with great deal of homogeneity, and in a way that can be reversed. It's a great tool for controlling gene expression.”

As beautiful as CRISPR-Cas9 is, it hands off the repair to natural cellular processes, which are complex and multifaceted

The project was partially funded by a 2017 grant from the Defense Advanced Research Projects Agency to create a reversible gene editor. “Fast forward four years [from the initial grant], and CRISPRoff finally works as envisioned in a science fiction way,” says co-senior author Gilbert. “It's exciting to see it work so well in practice.”

The classic CRISPR-Cas9 system uses a DNA-cutting protein called Cas9 found in bacterial immune systems. The system can be targeted to specific genes in human cells using a single guide RNA, where the Cas9 proteins create tiny breaks in the DNA strand. Then the cell’s existing repair machinery patches up the holes. Because these methods alter the underlying DNA sequence, they are permanent. Plus, their reliance on “in-house” cellular repair mechanisms means it is hard to limit the outcome to a single desired change. “As beautiful as CRISPR-Cas9 is, it hands off the repair to natural cellular processes, which are complex and multifaceted,” Weissman says. “It's very hard to control the outcomes.”

That’s where the researchers saw an opportunity for a different kind of gene editor — one that didn’t alter the DNA sequences themselves, but changed the way they were read in the cell. This sort of modification is what scientists call “epigenetic” — genes may be silenced or activated based on chemical changes to the DNA strand. Problems with a cell’s epigenetics are responsible for many human diseases such as Fragile X syndrome and various cancers, and can be passed down through generations. Epigenetic gene silencing often works through methylation — the addition of chemical tags to to certain places in the DNA strand — which causes the DNA to become inaccessible to RNA polymerase, the enzyme which reads the genetic information in the DNA sequence into messenger RNA transcripts, which can ultimately be the blueprints for proteins.

Weissman and collaborators had previously created two other epigenetic editors called CRISPRi and CRISPRa — but both of these came with a caveat. In order for them to work in cells, the cells had to be continually expressing artificial proteins to maintain the changes. “With this new CRISPRoff technology, you can [express a protein briefly] to write a program that's remembered and carried out indefinitely by the cell,” says Gilbert. “It changes the game so now you're basically writing a change that is passed down through cell divisions — in some ways we can learn to create a version 2.0 of CRISPR-Cas9 that is safer and just as effective, and can do all these other things as well.”

To build an epigenetic editor that could mimic natural DNA methylation, the researchers created a tiny protein machine that, guided by small RNAs, can tack methyl groups onto specific spots on the strand. These methylated genes are then “silenced,” or turned off, hence the name CRISPRoff. Because the method does not alter the sequence of the DNA strand, the researchers can reverse the silencing effect using enzymes that remove methyl groups, a method they called CRISPRon.

Since we now can sort of silence any part of the genome that we want, it's a great tool for exploring the function of the genome

As they tested CRISPRoff in different conditions, the researchers discovered a few interesting features of the new system. For one thing, they could target the method to the vast majority of genes in the human genome — and it worked not just for the genes themselves, but also for other regions of DNA that control gene expression but do not code for proteins. “That was a huge shock even for us, because we thought it was only going to be applicable for a subset of genes,” says first author Nuñez.

Also, surprisingly to the researchers, CRISPRoff was even able to silence genes that did not have large methylated regions called CpG islands, which had previously been thought necessary to any DNA methylation mechanism. “What was thought before this work was that the 30 percent of genes that do not have a CpG island were not controlled by DNA methylation,” Gilbert says. “But our work clearly shows that you don't require a CpG island to turn genes off by methylation. That, to me, was a major surprise.”

To investigate the potential of CRISPRoff for practical applications, the scientists tested the method in induced pluripotent stem cells. These are cells that can turn into countless cell types in the body depending on the cocktail of molecules they are exposed to, and thus are powerful models for studying the development and function of particular cell types. The researchers chose a gene to silence in the stem cells, and then induced them to turn into nerve cells called neurons. When they looked for the same gene in the neurons, they discovered that it had remained silenced in 90 percent of the cells, revealing that cells retain a memory of epigenetic modifications made by the CRISPRoff system even as they change cell type.

They also selected one gene to use as an example of how CRISPRoff might be applied to therapeutics: the gene that codes for Tau protein, which is implicated in Alzheimer’s disease. After testing the method in neurons, they were able to show that using CRISPRoff could be used to turn Tau expression down, although not entirely off.  “What we showed is that this is a viable strategy for silencing Tau and preventing that protein from being expressed,” Weissman says. “The question is, then, how do you deliver this to an adult? And would it really be enough to impact Alzheimer's? Those are big open questions, especially the latter.”

More than 32,000 people from over 160 countries registered for The Alzheimer’s Association International Conference (AAIC 2020) in July. This largest and most influential international conference on dementia science had to be held virtually this year, when important highlights were aired. The ability to identify individuals at high risk of developing Alzheimer’s Disease (AD), or at early…

Even if CRISPRoff does not lead to Alzheimer’s therapies, there are many other conditions it could potentially be applied to. And while delivery to specific tissues remains a challenge for gene editing technologies such as CRISPRoff, “we showed that you can deliver it transiently as a DNA or as an RNA, the same technology that's the basis of the Moderna and BioNTech coronavirus vaccine,” Weissman says. Weissman, Gilbert, and collaborators are enthusiastic about the potential of CRISPRoff for research as well.  “Since we now can sort of silence any part of the genome that we want, it's a great tool for exploring the function of the genome,” Weissman says. Plus, having a reliable system to alter a cell’s epigenetics could help researchers learn the mechanisms by which epigenetic modifications are passed down through cell divisions. “I think our tool really allows us to begin to study the mechanism of heritability, especially epigenetic heritability, which is a huge question in the biomedical sciences,” Nuñez says.

For the first time, an international research alliance has observed the RNA folding structures of the SARS-CoV2 genome with which the virus controls the infection process. This could not only lay the…