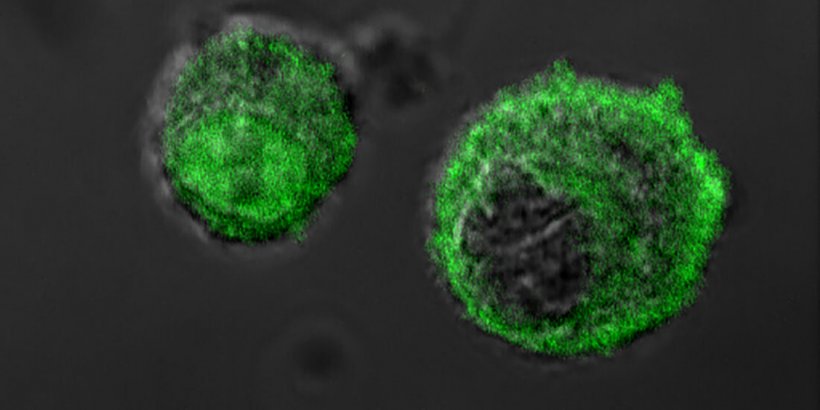 This microscope image shows two cancer cells from a patient with bone marrow cancer. The cells are 1/100 millimetre in diameter.

The breakthrough is the result of more than 13 years of work. The work has now been published in the Journal of the Federation of American Societies for Experimental Biology (FASEB). The next step in research could completely re-direct the treatment of cancer.

The explanation for the new findings lies in something you yourself have likely experienced: When you run or cycle fast, you may suddenly lose strength in your legs, and they feel heavy and powerless. Lactic acid buildup causes your muscles to become flooded with waste products. Lactic acid is produced by the body when it works harder and needs more energy than the lungs can supply with oxygen. After training, you gasp for air, and your body is able to remove the lactic acid with the help of oxygen. Cancer cells have to function even without much oxygen Oxygen is important when the body needs to convert sugar into energy. Muscle cells in particular produce lactic acid, but cancer cells that form in healthy cells in the body also begin to produce lactic acid. The cancer cells don't typically have this ability until cancer enters precisely the same cells.

Now we're beginning to understand why cancer cells thrive so well by making this protein. It's simply a key to their survival

Just like muscle cells, cancer cells have to be able to function even when not much oxygen is available. The area around tumors is acidic and contains little oxygen. In order to survive in such an environment, the cells need to be able to grow when little oxygen is available—that is, in conditions quite similar to when a muscle cell produces lactic acid.

For over a hundred years we've known that cancer cells prefer to break down sugar into lactic acid, but how they reprogram themselves has not been thoroughly studied. After their experimental studies, NTNU Professor Magne Børset and the research team figured out how cancer cells suddenly gain the ability to produce lactic acid. Researchers Pegah Abdollahi and Esten Vandsemb in Børset's research group and colleagues recently published two articles showing that the PRL-3 protein reprograms the cells to prefer lactic acid both when a little or a lot of oxygen is available. "We've long known that PRL-3 appears in cancer cells, while in healthy cells it's found mainly in muscle cells. Now we're beginning to understand why cancer cells thrive so well by making this protein. It's simply a key to their survival," says Børset.

At about the same time as the NTNU discovery, a Japanese research group has shown that PRL-3 protects cells against acidic environments. The combined findings show that PRL-3 reprograms cells precisely to withstand conditions that are often found in and around cancerous tumors. Now the goal is to turn off the molecule that allows the cells to reprogram themselves.

Researcher John Lazo at the University of Virginia in the U.S. has developed a molecule that has been shown to disrupt the PRL-3 protein in his studies. "We want to test the inhibitors that Lazo is developing and develop them further here in Norway. The inhibitors are chemical molecules that bind to the molecule you want to turn off," says Børset. In addition to testing inhibitors, the research team wants to how PRL-3 behaves in normal cells in the body.

"The interesting thing here is that the molecule is found mainly in muscle cells. It's conceivable that we benefit from PRL-3 when we produce energy to run fast. No one has tested whether the molecule makes us better at running," says Børset. To see if this is the case, researchers from Børset's group will collaborate next with researchers from Professor Ulrik Wisløff's  Cardiac Exercise Research Group at NTNU. They will be studying mice that have been genetically modified to lack PRL-3 to see if they tolerate anaerobic exercise less well than mice that retain the PRL-3 gene. "We could be on the trail of an important biological mechanism for our muscles," says Børset.

New cause for tumor spread found

A new study from the University of Helsinki shows that cells that are freshly isolated from lung cancers can be used to create robust drug response data. This approach can identify actionable or…