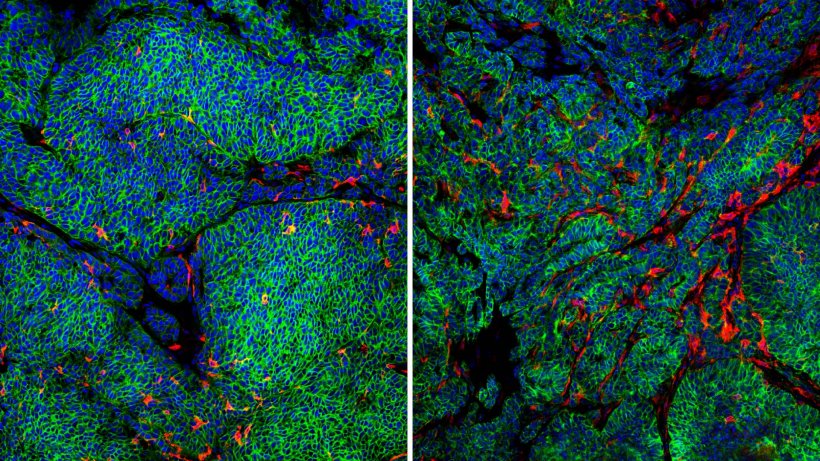 Photomicrographs of mouse tumors expressing a factor that suppresses a local immune response (left) and one that permits that immune response (right). Researchers discovered that cancer cells expressing the protein CCR2 suppress the secretion of factors that cause dendritic cells to infiltrate and mature in tumors. The image on the left shows where the cancer cells (colored green) have the CCR2 protein and this tumor has few dendritic cells (colored red). The image on the right shows a tumor where the cancer cells do not have the CCR2 protein, and this tumor is infiltrated by many more dendritic cells. Cell nuclei are stained blue in both images.

That key player provides local immune surveillance by activating killer T-cells, but if it cannot mature and do its job, breast cancer cells can escape detection from the immune system, resulting in unnoticed and unhindered growth.

The researchers published their findings in the Journal of Experimental Medicine.

This delves into something that no one was really considering when blocking CCR2. It opens up new ideas to build even better therapies or use existing drugs in different ways

The key players in question are known as cross-presenting dendritic cells. These cells are important because they initiate and coordinate local immune responses by showing pieces of cancer cells to so-called killer T-cells. The killer T-cells can then detect and destroy the cancer cells.

The scientists found breast cancer cells use a protein on their surface, a so-called cell surface receptor called CCR2, in an unexpected way. It disrupts cross-presenting dendritic cell maturation. This was a surprise because CCR2 has a totally different function in immune cells, which use the receptor to guide themselves to areas of inflammation. However, when CCR2 receptors appear on the surface of tumor cells, they suppress the secretion of a signal that dendritic cells need to mature. The researchers are keen to learn more precisely how cancer cells use CCR2 to suppress those key proteins, but this new research finding is already helpful because CCR2 itself can be targeted. In 2012, the Egeblad lab revealed how blocking CCR2 on immune cells can improve the ability of drugs to penetrate tumors. Now, CCR2-blocking drugs are being tested in the clinic as a cancer treatment. These latest findings suggest that blocking CCR2 activity can also help the body’s own immune response to fight cancer. Postdoctoral researcher Miriam Fein adds: "This delves into something that no one was really considering when blocking CCR2. It opens up new ideas to build even better therapies or use existing drugs in different ways."

A new genetic study by UK-based scientists suggests that immunotherapy drugs could prove to be an effective treatment for some breast cancer patients. Scientists from the Wellcome Trust Sanger…

When immune cells invade the tumor, this is usually considered a good sign because the body's own immune system appears to be responding to the cancer. In the case of certain types of breast cancer…