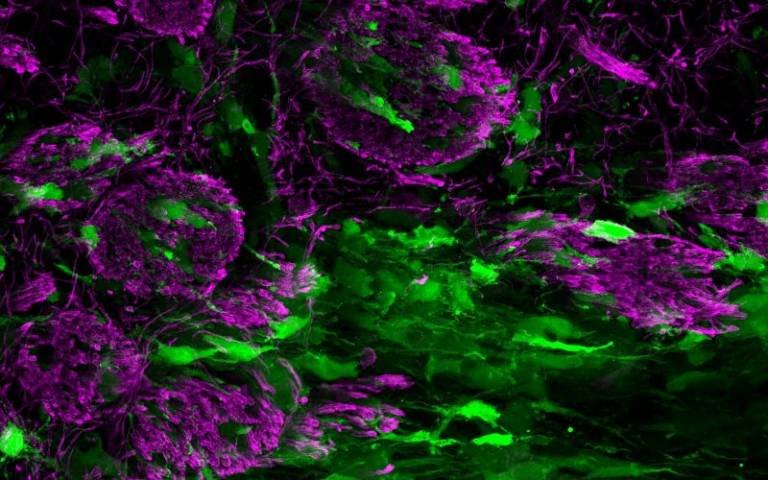 In the study on mice, funded by Cancer Research UK and published in Nature Communications, researchers used these novel findings to identify drugs which could be used, or repurposed, to harness this response (feature) and treat the cancer.

Using the pre-clinical mouse models, the researchers found that Pranlukast, a drug clinically approved for treating asthma in people, suppressed glioblastoma growth. Explaining the research, lead author, Professor Simona Parrinello (UCL Cancer Institute), said: “We know glioblastoma often develops and spreads in the brain’s white matter but it has been unclear why this happens or what molecules are involved in this process. In this experimental study, we wanted to understand what impact white matter has on cancerous tumour cells.”

To our surprise, when the tumour cells spread into the brain’s white matter, it made the glioblastoma less aggressive

Glioblastomas are the most aggressive type of cancer that begins within the brain. One of the main reasons that glioblastomas are so difficult to treat is that they spread into different regions of the brain. Approximately half the brain is grey matter, made up of cell bodies including neurons, the other half, referred to as white matter is composed of neuronal projections which are insulated by fatty membranes and therefore appear white. Tumour cells use the white matter as a route to spread to other brain regions.

In this study, the research team discovered that tumour cells, mimic brain repair, in that they attempt to repair the damage that the growing tumour mass causes to the brain’s white matter. Professor Parrinello, who is Group Leader at the Samantha Dickson Brain Cancer Unit, part of UCL Cancer Institute, explained: “To our surprise, when the tumour cells spread into the brain’s white matter, it made the glioblastoma less aggressive. This response is caused by the growing tumour injuring the white matter and in turn responding to this wound-like environment by attempting to repair it. This causes the tumour cells to mature into cells that resemble the normal brain cells that make up the white matter. In this mature state, tumour cells become less able to grow and spread.”

Novel advanced imaging biomarkers are being developed in a series of studies at several UK centres that may lead to the earlier assessment of treatment response to glioblastoma (GBM) and a better survival rate.

The team found that this tumour response can be exploited for glioblastoma treatment using drugs that promote normal white matter repair, such as Pranlukast. Professor Parrinello added: "Glioblastoma is the most common and aggressive type of primary brain tumour. There are currently no effective treatments for glioblastoma, so recurrence is inevitable. As a result, prognosis for glioblastoma patients remains extremely poor with a median survival of less than 18 months. Here we identified a potential new approach to treat glioblastoma and show that a drug currently in clinical use for asthma suppresses glioblastoma growth and spread in preclinical models."

Around 2,200 people in the UK (mostly adults) are diagnosed with glioblastoma each year and currently prognosis is extremely poor with average survival rate of around six to 18 months. Michelle Mitchell, chief executive of Cancer Research UK, said: “Brain tumours are notoriously hard to treat because we still don’t know enough about the biology of the disease, and current treatments are not effective enough. This early research is fascinating as it could mean an existing asthma drug may help people with glioblastoma. Repurposing a drug that has already passed safety tests would save a lot of time compared to developing a new treatment from scratch, time which would make an incredible difference to the lives of people affected by glioblastoma.”

Medication prescribed for a certain type of epilepsy may offer a new method for treating malignant infantile brain tumours. A specific mTOR inhibitor has the ability to cross the blood–brain…

Treating diseases such as Alzheimer’s or Parkinson’s is a challenge because drugs have to be able to cross the blood–brain barrier. As a result, the doses administered must be high and only a…

Classic antidepressants could help improve modern cancer treatments. They slowed the growth of pancreatic and colon cancers in mice, and when combined with immunotherapy, they even stopped the cancer…