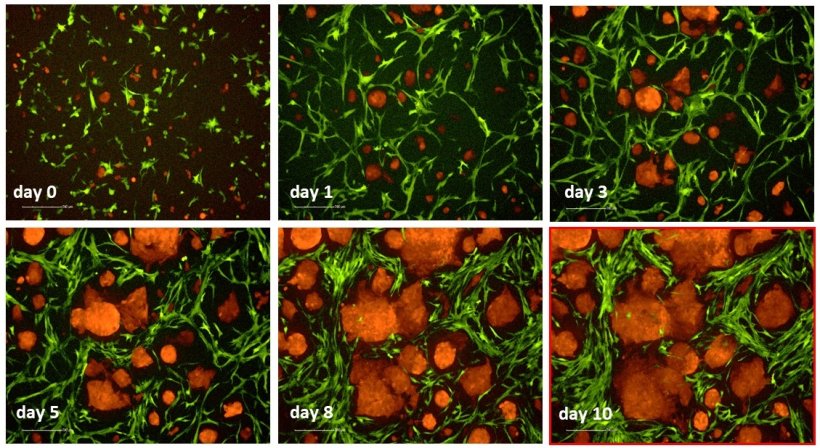 Figure legend: Spontaneous formation of tissue-like structures from stromal cells (green) and tumour cells (red), when embedded between two layers of extracellular matrix in 3D culture. Single tumour cells generate multicellular tumour organoids, which are surrounded by stromal cells in a fashion typical for solid cancers, such as prostate cancers.

Speaking at the recent SLASEurope 2019 event in Barcelona, Professor Matthias Nees from the Institute of Biomedicine in the Department of Biology at the University of Turku, Finland, outlined the potential of High-Content Screening (HCS) and how it could help add a new dimension to personalized medicine. HCS is used in biological research and drug discovery to identify active pharmaceutical ingredients (API) such as small molecules or peptides that alter the proliferation (growth), survival or the phenotype of cells. Increasingly, HCS is performed not just with isolated cells but with living multicellular structures (organoids) or tissues.

Professor Nees said: “The basic message of my talk related to the necessity to provide tumour cells with context, namely extracellular matrix and the tumour microenvironment. This is necessary as solid cancers, in particular the most common ones (epithelial cancers or carcinomas), always contain these components as part of their tissue architecture.” He said that isolated tumour cells, growing on plastic surfaces, strongly tend to hyperproliferation and acquire properties that have little in common with the behaviour of tumour cells in a patients’ tissues, whereas if extracellular matrix (ECM) is added, tumour cells can partially differentiate and form polarized tissue-like structures. “These are the equivalent of ‘organoids’, now widely used in research and personalized medicine,” he said. “Organoids and related 3D culture methods that also contain other cellular components of tissues - such as the stromal fibroblasts or immune cells - may revolutionize cell biology.”

However, he acknowledges they are still currently short of being utilized in HCS as the complexity of such 3D cultures is considered too high for the generation of robust reproducible assays and there is a lack of appropriate automated image analysis tools to make sense of the complexity observed in such 3D tissue cultures. He stressed that the right choice of ECM is critical to trigger a degree of differentiation or maturation in vitro that corresponds to genuine tissue structures observed in cancer biopsies. However, even with these more complex tissue-models, there are only very few tools that allow quantitative evaluation of phenotypic drug effects on both tumour and stromal cells in such 3D microtissues.

There is a risk is that you are treating patients with a drug that does not work, or miss a patient that would have responded to a particular drug

In his presentation, he demonstrated how it is possible to mimic the generation of miniaturized, tissue-like structures in vitro. These microtissues can be generated in 96- and even 384-well plates, liquid handling robotics can be used, and they can be scaled for higher throughput. “Simultaneously, we demonstrated that high content imaging and automated image analysis software are able to extract the most important information from both tumour and stromal cells, about their chemosensitivity towards therapeutics for example. In fact, it can extract so much information, that it is required to focus on the most relevant morphologies and living versus dead cells.”

His team has been able to quantitatively measure drug effects on growth and proliferation of tumour cells (organoids) and surrounding stromal structures, but also cell death and their invasive properties. “This can be used in drug screening, such as with cancer cell lines, but also in personalized medicine, in which primary tumour cells are used instead - in the same 3D systems. There is a suggestion that about 20-30% of patients respond to chemotherapeutic drugs that they are given and 70-80% do not respond, or poorly respond, so there is a risk is that you are treating patients with a drug that does not work, or miss a patient that would have responded to a particular drug. The main benefit is to exclude this risk factor.”

His team in Finland has worked on the subject for the last decade and while chemosensitivity assays with patient cells or tissues are not widely established in the clinics because of a lack of validated assays, the field does have potential. Ideally, he added, this could be combined with genetic tests for cancer mutations, which is increasingly accepted as a predictive tool for informed clinical decision-making. A combination of both approaches would be ideal.

In generating complex 3D cultures, his team discovered that different tumour types form very different multi-cellular tissue-like structures in vitro, leading to the research focus on invasion. He said the stroma component is critical for how aggressive a tumour cell becomes and also has an influence on how a tumour cell responds to drugs. In terms of whether HCS can advance diagnosis and therapies associated with cancers, Professor Nees believes it can “broaden the scope of biology” that is examined. “There are a number of other things that are normally difficult to look at,” he added. “Differentiation of tumour cells is rarely looked at in other assays but in HCS you can assess that even quantitatively and see if they form round structures or a particular texture which tells you immediately that tumour cells are differentiating – not invading.”

Tumour differentiation, he explained, is a key issue that typically opposes aggressive features like invasion, which in turn is strongly connected to metastasis and recurrent disease. Can cells often show an amazing degree of “plasticity” and can readily shift between differentiation and invasion.

Professor Matthias Nees is Adjunct Professor in the Department of Biology at University of Turku in Finland, with a research interest in High Content-Screening (HCS).

Video • Mini-bones from the lab

Toward a personalized approach of bone cancer research and therapy

Researchers generated human mini bones in the lab which mirror the composition and function of human bone - a step toward the development of future patient-tailored models of bone cancers and tumors.