The distortion of resources for pathology impacts on efficiency and simultaneously worsens the quality of and access to healthcare, according to pathologist László Fónyad. ‘We have 76 hospital pathology departments in Hungary and around 200 pathologists, who deal with approximately 550,000 cases per year. ‘In terms of pathology service diversity, the situation is frightening,’ he said. ‘Some labs only have a thousand cases while others have 30,000. There are numerous small labs with no fulltime pathologist available, or only one –usually a retired pathologist who is still working. It’s unjustifiable and everybody knows that the result is long turn around times of findings, which can take two to four weeks, a lack of consultations that would be needed in complicated cases, and lack of rapid diagnostic aid during surgeries,’ he said.

Digital pathology solutions could potentially improve the situation, Fónyad explained, and there have been a number of initiatives in that sense in Hungary since 1994, with the implementation of an early telepathology network connecting various hospitals and pathology labs, using still images and sharing live images of robotised microscopes.

From the mid 2000s, digitisation has spread to other fields of pathology, such as graduate and postgraduate histopathology teaching, research and routine diagnostics, thanks to the cooperation between Semmelweis University and a Hungarian spin-off company in digital pathology. ‘For many years, efforts to introduce telepathology on a local, regional and national level have been driven by enthusiastic volunteer pathologists and have not been financed by the Hungarian government,’ Fónyad pointed out.

In 2015 the European Union and the Hungarian government co-financed the Social Renewal Operational Programme and issued a nationwide comprehensive report on pathology services in Hungary, which highlighted the importance of enhanced laboratory automatisation, workflow management and digitisation as tools to improve quality. In 2016 the Human Resources Development Operational Program, also co-financed by the EU and Hungary, launched an initiative to develop pathology services throughout the country, with a budget of approximately €11 M. 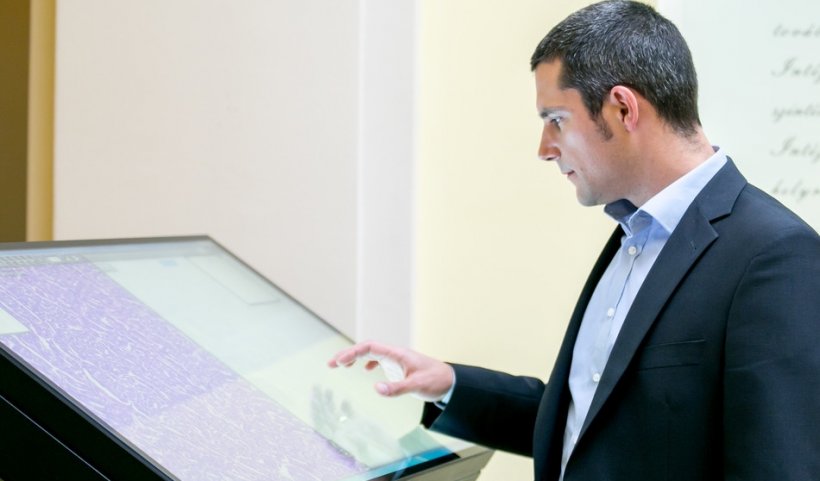 The objective is to provide labs with both traditional and high-end equipment – tissue processors, microtomes, strainers, etc. – and equipment of safe lab sample tracking, such as cassette and slide printers, and barcode readers. Another goal is to develop a nationwide dedicated pathology information system (nwPIS), which will connect all the pathology labs and be interfaced with each lab’s own hospital information system (HIS).

‘The nationwide pathology information system will enable real time data collection of all aspects of pathology workflow and resource management. Synoptic reporting and solutions for automated or semi-automated medical coding and billing are also planned,’ Fónyad said. The system will be integrated into the Electronic Health Care Service System, a recently installed cloud computing service connecting various HISs throughout the country. Pathologists will be supplied with computers suitable for digital pathology with ultra-high resolution large-format displays.

Hungary is also working on a nationwide telepathology consultation network, to digitise, store and share slides for intraoperative fresh frozen specimens, second opinion and primary diagnosis. The project is primarily being conducted by Semmelweiss University, which recently received a €6.72 million grant from the public health program of the Norwegian Financial Mechanism, an organisation that regularly injects money into EU states initiatives. The project also includes the design of a qualification program for histotechnicians, expanding their competence to handle surgical samples that are intended for intraoperative pathology telediagnostics, a quality assurance system for the digital network and a detailed project plan for the implementation of the network when resources become available.

Discussions about funding the implementation have begun with the Ministry for Innovation and Technology. Ideally, the teleconsultation system should be fully equipped by 2019, but workshops should be held for users and the medico-legal aspect should be clarified before the network launches, Fónyad pointed out. ‘If necessary, the pathology community should address the issue and counsel the governing bodies on matters of patient privacy, security of patient data and informed consent, licensure, malpractice and liability or reimbursement,’ he added.

The current decentralised model of pathology departments is a challenge to good service, and digitisation could also help overcome this difficulty, he explained. ‘We have a physically fragmented service. We’re thinking of a reasonable centralisation of the pre-analytical processes into several labs, and to distribute the task or several tasks of the analytical phase. This is where digital pathology comes in. If you want to centralise, you end up with enormous amounts of data and physical samples to process. You need to have a dedicated information system and software to track your samples and trace back any errors. The planned nationwide telepathology consultation network enables distribution of diagnostic tasks between pathologists all around the country.’

The consultation network could improve the human resources capacity of pathology services, but will not solve the low-cost effectiveness rooted in fragmentation, Fónyad warned. ‘It has to be clear that implementing digital pathology could help to overcome some of our difficulties but not all, while it is a prerequisite for lab centralisation. Digital pathology is just a tool, not an end,’ he concluded.

In 2004 László Fónyad MD PhD graduated from the Faculty of Medicine at Semmelweis University (SU), in Budapest. Following his pathology residency, he became a faculty member at the first Department of Pathology and Experimental Cancer Research, in SU. There, in 2015, Fónyad received his PhD in digital pathology, an interest that began when a student. He was the first to introduce digital slides into graduate education in Hungary, and has headed numerous pilot projects to adopt digital slides in routine surgical pathology. As a part of his PhD program he received a grant from the Hungarian-American Enterprise Scholarship Fund’s (HAESF) and was a visiting research fellow at the Pathology Imaging and Communication Technology (PICT) Centre, Massachusetts General Hospital, in Boston, USA, where he worked with Yukako Yagi, and John Gilbertson.

Neagen and Visiopharm announce an integration which improves the data quality of cancer patient samples in a single PACS-driven digital pathology workflow also offering time and cost savings. This in…

Advanced staining can be beautifully simple when we standardise it