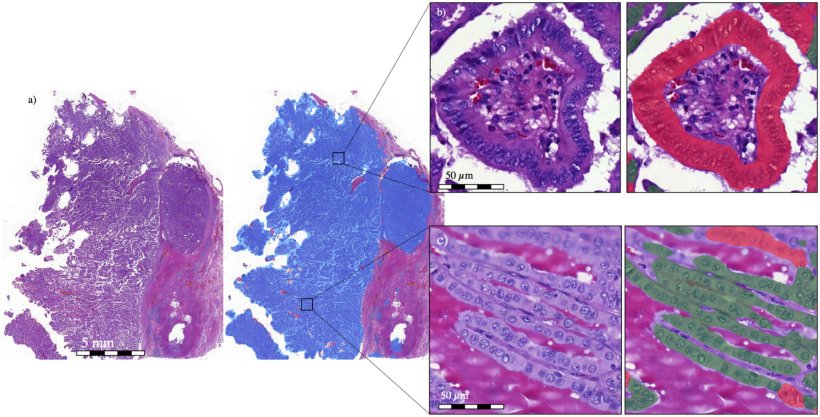 a) A zoomed-out view of a papillary thyroid carcinoma tissue sample in which the results of the deep learning (DL) algorithm’s first layer are shown (blue). From the registered carcinoma area, the DL algorithm then registers the carcinoma epithelium as either b) tall cell (TC) (red) or c) non-TC area (green). The DL algorithm determines the percentage of the epithelium covered by TCs, that is, the TC score.

‘That’s why we are developing and training a deep learning algorithm using supervised learning to detect and quantify the proportion of tall cells (TCs) in papillary thyroid carcinoma,’ explained Sebastian Stenman, researcher from the Institute for Molecular Medicine, and the Department of Pathology at the University of Helsinki, Finland.

In summer 2022, his research team is testing it on an independent data set, and further validating it on an independent set of 90 papillary thyroid carcinoma samples from patients treated at the Hospital District of Helsinki and Uusimaa (HUS) between 2003 and 2013. The Finnish scientist compared the algorithm-based tall cell ratio to independent scoring by a human investigator and looked at how those scores were associated with disease outcomes.

The results published revealed that the deep learning algorithm detected tall cells with a sensitivity of 93.7% and a specificity of 94.5%.  In the validation set, the deep learning algorithm tall cell scores correlated with a diminished relapse-free survival.  ‘We showed that the DL-based algorithm was better than the human observer in identifying tall cell variants,’ said Stenman. The algorithm could prove useful as a clinical tool for pathologists when evaluating PTC samples and could potentially significantly improve the consistency of TCV case assessment. So far, no such algorithm has been described.

Deaths from cancer are currently estimated at 10 million each year worldwide. Conventional cancer staging systems aim to categorize patients into different groups with distinct outcomes. ‘However,…

Renal cell carcinoma is among the fifteen most common cancers worldwide. Dr Titus Brinker, from the German Cancer Research Center (DKFZ), looked at whether a convolutional neural network (CNN) can…

Clinical management of soft tissue sarcoma is particularly challenging. Dr Sebastian Foersch, researcher at the Institute of Pathology at the University Medical Center in Mainz, Germany, has used a…