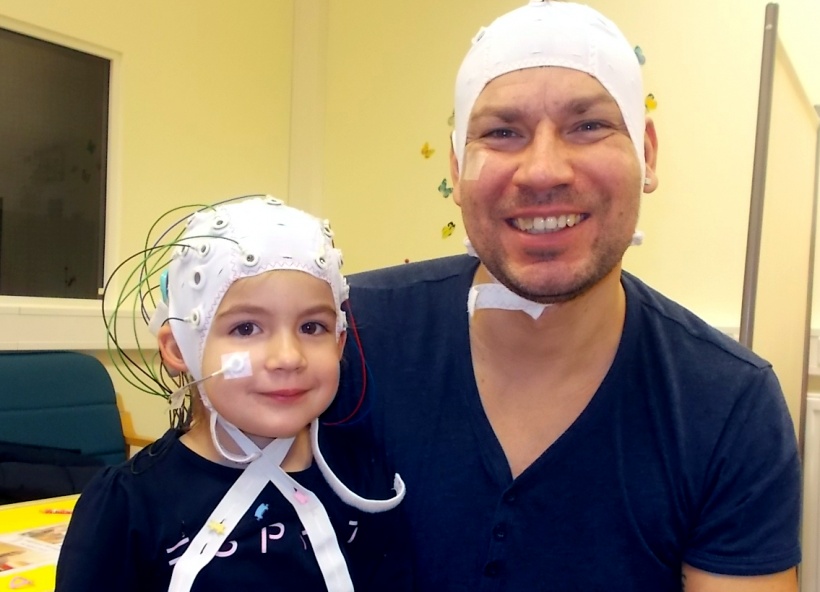 The scientist analysed the brain activities of the little ones using electroencephalography (EEG) to investigate when the children with cochlear implant registered the incorrect words.
Source: Max Planck Institute for Human Cognitive and Brain Sciences

The Max Planck Institute for Human Cognitive and Brain Sciences (MPI CBS) in Leipzig and University Medical Centre Dresden found that deaf children with a cochlear implant learn words even faster than those with normal hearing. This finding can help refine the search for the reasons behind their varying success in language acquisition. For many years scientists tinkered to find a perfect replacement for the damaged or dysplastic inner ear. Cochlear implants receive a sound, convert it into electrical stimuli and send these impulses directly to the auditory nerve, thereby giving hearing impaired children the chance to connect to the world of sounds and noises.

It is not just the memory, but also the broader knowledge about their surroundings that is more formed

It has so far been assumed that these children reach the language level of children with normal hearing much later. Previous studies showed that from the moment of having the device implanted, children need longer to attain the important steps of learning their mother tongue—for instance, being able to distinguish the rhythm of their mother tongue from that of another language. This could imply that developmental milestones necessary to start school are also delayed, although they reach all the other developmental stages needed.

A current study at the Max Planck Institute for Human Cognitive and Brain Sciences (MPI CBS) in Leipzig and the University Medical Centre Dresden has now revealed something different: “We observed that when deaf children get their implants, they learn words faster than those with normal hearing. Consequently, they build up certain word pools faster”, says Niki Vavatzanidis, first author of the underlying study and scientist at MPI CBS and the University Medical Centre Dresden. Normally, children need fourteen months to reliably recognise that known objects are named incorrectly. Children with an artificial cochlea were already able to do so after twelve months.

The reason for this finding could be that children with cochlear implants are older when they are first exposed to spoken language. Those with normal hearing learn aspects of language, such as the rhythm and melody of their mother tongue, from birth and even in the womb. In deaf children, this only starts at the time of their cochlear replacement, at the age of around one to four years. By this time certain brain structures necessary for language acquisition are already well developed. “It is not just the memory, but also the broader knowledge about their surroundings that is more formed. They already know about objects in their environment and have accumulated non-linguistic semantic categories” states Vavatzanidis. For example, they already know that objects such as cups or meals could be hot and that heat could be something harmful without knowing the word “hot”.

The neuroscientists examined these relations with the help of thirty-two children with cochlear implant in both ears. They carried out a test after twelve, eighteen and twenty-four months after implantation that tested their ability to recognise words: The young study participants were shown pictures of objects which were named either correctly or incorrectly. In parallel to this, the scientist analysed the brain activities of the little ones using electroencephalography (EEG). If the researchers detected an effect in the EEG known as N400, they knew that the child registered the incorrect word. This means they had established a stable connection between objects and their names. They had learnt the word.

“Children with cochlear implants could help us understand the general processes of language acquisition and determine which single steps are age-dependent” Angela D. Friederici explains, study leader and head of MPI CBS. “We now know that age does not affect how fast children learn words. On the contrary, they seem to catch up even if they were previously disadvantaged.” Upcoming studies should now focus on why some of the affected children, despite these findings, struggle to reach the level of their contemporaries with normal hearing.

Febrile convulsions: an early indicator for epilepsy in children?

Children who suffer repeated febrile convulsions have an increased risk of developing epilepsy and psychiatric disorders such as schizophrenia and depression later in life. This is shown by a…

Neonatal exposure to nicotine alters the reward circuity in the brains of newborn mice, increasing their preference for the drug in later adulthood, report researchers at University of California San…

Your child's learning disability might be something else entirely