Hybrid imaging is growing so big it is gaining a new name: multi-parametric imaging. You might see it as converging streams of digital data from genomics, metabolomics and proteomics. Or on a bad day it may seem more like the multiple heads of a hydra rising up to gobble every gigabyte of patient data they can grasp.

But that comes later. Because Thomas Beyer is a Professor of Physics of Medical Imaging at the Medical University Vienna, he likes to take a step back for a running start before leaping into the future. As the Deputy Head of the Centre for Medical Physics and Biomedical Engineering at the Medical University, Beyer presented an overview of the growth of hybrid imaging at a well-attended course for the European School of Radiology.

In the beginning there was hardware, said Beyer, a wide range of imaging modalities from X-ray, scintigraphy, to computed tomography (CT) to ultrasound (US) and magnetic resonance imaging (MRI). The origin of many of these modalities was around the 1950’s, with the developmental approaches being mainly independent. The combination of anatomical and functional imaging was first attempted when clinicians, as early as the 1960s, used a pen to mark body contours around scintigrams, or else adjusting overlays of printouts on light tables to co-register images from the nuclear medicine and radiology examinations. The fusion of images, using software that is familiar to us today, really took off in the 1990s with the digital availability of images and increase in computing power.

Beyer explains that the problem with both software and manual fusion is that they only work for limited axial ranges that largely exclude image co-registration between the two modalities being used. For this reason, hardware fusion has emerged, where two imaging modalities are physically combined within one gantry so that two co-registered exams can be taken as a single examination protocol.

The three clinically relevant hybrid imaging examinations combining dual modalities are SPECT/CT, PET/CT, and PET/MRI. While PET/CT and SPECT/CT came out about the same time, commercially available around 2000 and 2001, SPECT/CT has not enjoyed the same level of adoption, he said, estimating that for every SPECT/CT system installed around the world there are five PET/CT systems.

PET/MR was introduced in 2006 and commercially available in 2011, he said; yet there are barely 120 systems installed worldwide to date. ‘It remains hotly debated whether PET/MR is a clinical or a research machine because there is not yet any data supporting a clinical application with a proven clinical benefit,’ said Beyer. ‘Clinical PET/MR is a bit like the iPad, something everyone wants, that no one needs, but once you have it you are actually quite happy using it.’ 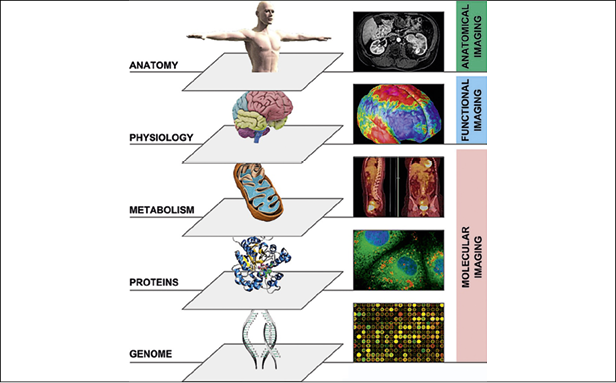 There is a plethora of data, yet the software tools provided are too inefficient to extract all the information that is in there.

Like a late child in the family, PET/MR is challenged by the prior existence of PET/CT. Johannes Czernin, who leads the Nuclear Medicine group at the University of California Los Angeles, once said PET/CT is a technological evolution that led to a medical revolution. Beyer finds that PET/MR is something like a medical evolution based on a technical revolution.

‘This rises to the level of Big Data, where some companies, like Microsoft and Google, are already thinking about how they can put all of this together,’ he noted.

His concern about the rush to multi-parametric diagnosis is that clinicians are still struggling with the flood of information from dual-modality platforms. ‘We will need to invest in Big Data and to integrate all patient data available, yet we need first to bring the existing hybrid modalities to an efficient and proper use, to get a handle on the data we already have.

‘My own perspective is that, whilst the big vendors provide big platforms to acquire the images, they really fall short of expectations regarding the means they provide to handle this imaging data. PET/MR is a prime example. There are 50 shades of grey information acquired that combine with four-dimensional PET information. There is a plethora of data, yet the software tools provided are too inefficient to extract all the information that is in there,’ Beyer said. ‘It’s like acquiring a Porsche but you can only run it in first gear.’

Before more information begins to fall from cloud computing, ‘There needs to be an investment in software platforms that allow us to extract more information,’ he believes. ‘We need to find ways to combine this with the complementary information, different levels of information about metabolics, proteins, genomics. We need to bring in specialists beyond nuclear medicine and radiology.

A novel imaging agent can reduce the number of false-positive PET/CT findings among cancer patients recently vaccinated for Covid-19. This may mitigate the issue of tracer uptake in lymph nodes…