Doctors have used focused ultrasound to destroy tumors in the body without invasive surgery for some time. However, the therapeutic ultrasound used in clinics today indiscriminately damages cancer and healthy cells alike.

Most forms of ultrasound-based therapies either use high-intensity beams to heat and destroy cells or special contrast agents that are injected prior to ultrasound, which can shatter nearby cells. Heat can harm healthy cells as well as cancer cells, and contrast agents only work for a minority of tumors. Researchers at the California Institute of Technology and City of Hope Beckman Research Institute have developed a low-intensity ultrasound approach that exploits the unique physical and structural properties of tumor cells to target them and provide a more selective, safer option. By scaling down the intensity and carefully tuning the frequency to match the target cells, the group was able to break apart several types of cancer cells without harming healthy blood cells. 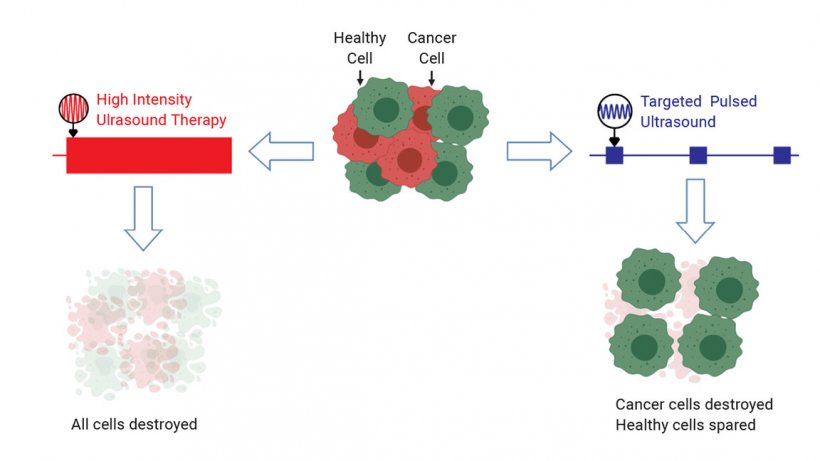 Their findings, reported in Applied Physics Letters, from AIP Publishing, are a new step in the emerging field called oncotripsy, the singling out and killing of cancer cells based on their physical properties. “This project shows that ultrasound can be used to target cancer cells based on their mechanical properties,” said David Mittelstein, lead author on the paper. “This is an exciting proof of concept for a new kind of cancer therapy that doesn’t require the cancer to have unique molecular markers or to be located separately from healthy cells to be targeted.”

A solid mechanics lab at Caltech first developed the theory of oncotripsy, based on the idea that cells are vulnerable to ultrasound at specific frequencies -- like how a trained singer can shatter a wine glass by singing a specific note. The Caltech team found at certain frequencies, low-intensity ultrasound caused the cellular skeleton of cancer cells to break down, while nearby healthy cells were unscathed. “Just by tuning the frequency of stimulation, we saw a dramatic difference in how cancer and healthy cells responded,” Mittelstein said. “There are many questions left to investigate about the precise mechanism, but our findings are very encouraging.”

The researchers hope their work will inspire others to explore oncotripsy as a treatment that could one day be used alongside chemotherapy, immunotherapy, radiation and surgery. They plan to gain a better understanding of what specifically occurs in a cell impacted by this form of ultrasound.

French researchers have found a way to facilitate access to tumours for killer lymphocytes, paving the way for more efficient immunotherapies against cancer.