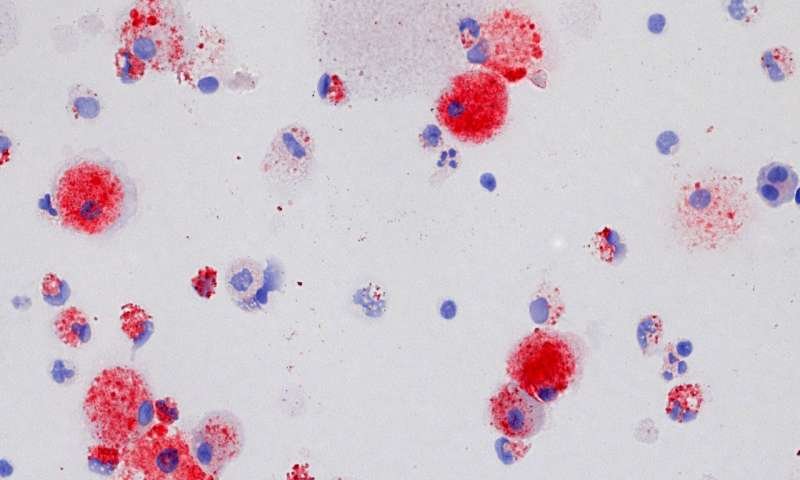 Alveolar macrophages from the lung of a patient with a disease called autoimmune pulmonary alveolar proteinosis. The red in the macrophage cells indicates an excess accumulation of cholesterol.

That's good news for people with PAP because at present the current standard treatment is something called a whole lung lavage. Essentially, it involves flushing patient lungs to clear out the gunk—a procedure so invasive it requires putting people under general anesthesia. Furthermore, the procedure has to be repeated every time the lungs clog up, which translates into some pretty serious quality of life issues for patients.

The Researchers found out the culprit is cholesterol. Led by Bruce Trapnell, MD, director of the Translational Pulmonary Science Center, the team found out years ago that PAP is linked to disruption of cell regulation by a molecule called granulocyte-macrophage colony stimulating factor (GM-CSF). GM-CSF is crucial for the development of fully mature macrophage cells in the lungs, which are needed to clear away used surfactant—a substance important to lung function—so that people can breathe.

In their new study of PAP patients and mouse models of the disease, the researchers uncovered a more precise reason that disruption of cell regulation by GM-CSF triggers PAP. It's because cell dysregulation reduces the ability of macrophages to process and clear out cholesterol, allowing its levels to build up. This contributes to the accumulation of surfactant that causes PAP and hinders breathing, according to study authors.

"Showing that the pathogenic driver of the disease is disruption of cholesterol homeostasis in these patients will change thinking in the PAP field," explains Trapnell. "Now that we know cholesterol in macrophages is a target for therapeutic development, repurposing statins is a pretty straight forward pharmacological approach for treating people with PAP."

The findings are expected to lead to a clinical trial to test statin therapy in larger numbers of people suffering from PAP, said Trapnell. The current study tested statin therapy in two adult patients and in genetically engineered mouse models of PAP.

In both human patients and animal models of PAP, stain therapy was associated with improved cholesterol balance in pulmonary macrophage cells and allowed surfactant to be cleared from lung air sacs. This improved respiratory function in the adult patients and in the laboratory models. Those tests were the result of earlier experiments on mouse pulmonary macrophages and cells donated from patients.

Tiny robots are next step to precisely targeted drug delivery

Reseachers have developed a novel microneedle for injecting therapeutics into the eyes, potentially solving one of the major challenges of treating eye diseases.