This procedure lays the foundation for breast cancer therapy, explained Professor Sigurd Lax, Director of the Institute of Pathology at Landeskrankenhaus Graz Süd-West (Austria), prior to the autumn congress of the Austrian Society of Pathology – Austrian section of IAP (ÖGPath /IAP Austria): ‘Pathology plays a crucial and indispensable role in the diagnosis, early detection and interdisciplinary therapy management of breast cancer,’ he pointed out. ‘The definitive diagnosis of breast cancer and its pre-cancerous stages is established by pathologists.’

If suspicious lesions are detected in a radiological study, a biopsy is performed to collect tissue samples. ‘In more than 95 percent of cases, the pathologist can provide a conclusive diagnosis on the basis of those samples,’ Professor Lax points out. Moreover, highly sensitive digital systems check the biopsied lesion samples for the molecular biomarkers oestrogen and progesterone receptors, as well as human epidermal growth receptor 2, the so-called HER2/neu. Procedure results define the further diagnostic or therapeutic path:

Prior to surgery, patients with HER2 positive and triple negative carcinoma usually undergo chemotherapy, which completely destroys the cancer cells in up to 66 percent of all cases. 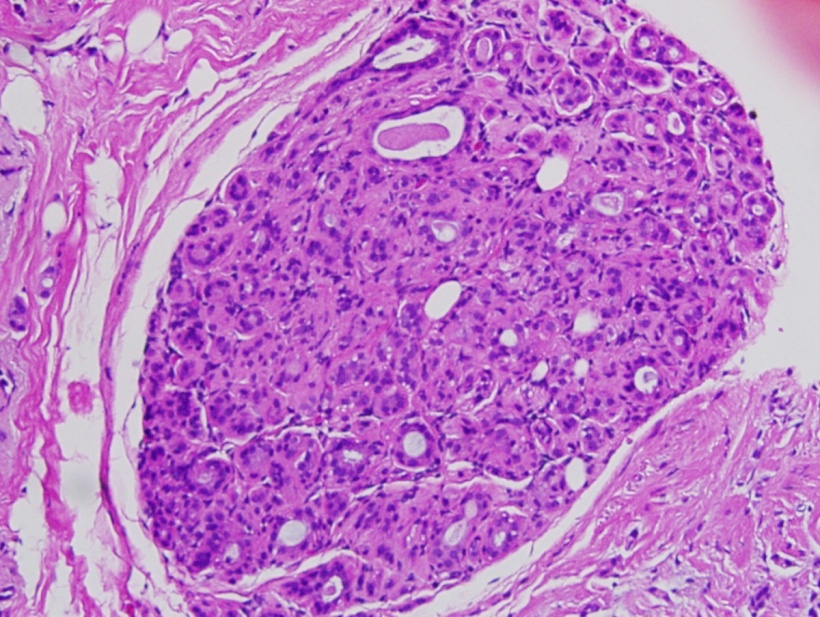 Histopathologic image from ductal cell carcinoma in situ (DCIS) of the breast.

After surgery, the pathologist analyses the removed tumour bed tissue to determine therapy has been successful and prepares a report providing data on tumour type, histopathological differentiation, tumour stage and resection margin status. In addition, the resection sample is checked again for oestrogen and progesterone receptors and HER/neu, as well as Ki67, a tumour growth marker.

The results of these histological studies inform the adjuvant therapy – either hormone therapy, targeted radiation therapy, chemotherapy or anti-HER2/neu therapy.

‘In the past 15 years molecular tests were developed that allow us to determine a broad range of molecular changes in tumour tissues,’ Lax reported. While these tests cannot predict tumour response to a specific therapy, they do have a certain prognostic value, albeit, he said, ‘due to the high costs, their use is still very limited.’

Such a molecular test is Endopredict, which provides information on the probability of tumour recurrence at the original site in hormone receptor positive HER2/neu negative patients. Lax expects to see ‘new therapy targets that promise higher survival rates specifically for patients with HER2/neu negative tumours.’

In the future, Lax is sure his discipline will contribute essential knowledge to cancer therapy: ‘The success of a targeted therapy will rely to a large extent on high quality molecular pathology studies.’

Profile:
Born and educated in Graz, Austria, Professor Sigurd F Lax MD established the Institute of Pathology at Landeskrankenhaus Graz Süd-West (Austria) in 2002 and today is still its head. Since 2004 he has also served as Speaker (Chair) of the Working Group on Gynaecological and Breast Pathology of the German Society of Pathology. In 2013-14 he was President of the Austrian Society of Pathology – Austrian section of IAP (ÖGPath /IAP Austria). He is a member of several national and international professional societies, including the American Association for Cancer Research (AACR) and the International Society of Breast Pathology. Authorship includes around 135 research articles and contributions in 25 books.

Molecular profiling is transforming brain cancer management and radiologists must get to grips with the upcoming paradigm that will affect the way they report findings. Renowned neuroradiologist…