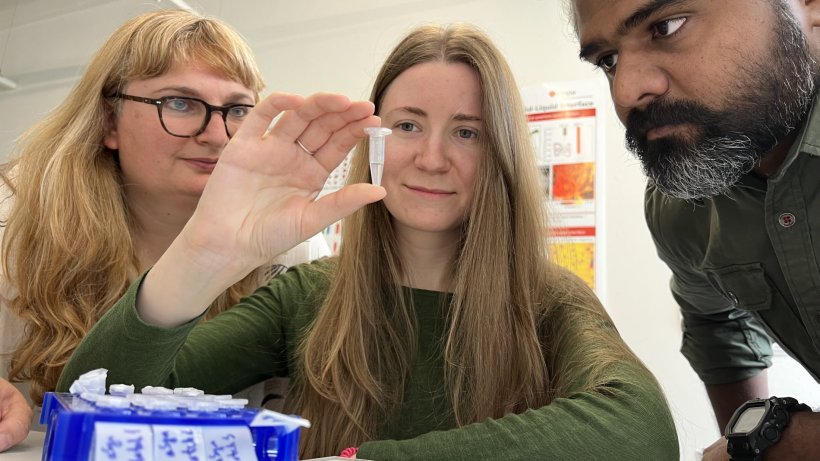 Protein detectives: Empa researchers Peter Nirmalraj and Olena Synhaivska from the Transport at Nanoscale Interfaces lab and Silvia Campioni from the Cellulose & Wood Materials lab (from right to left) decipher important steps in the molecular disease process of Parkinson's.

A team from Empa and the University of Limerick was able to show how the protein takes on an unusual shape when exposed to large amounts of copper ions. The findings, published in ACS Chemical Neuroscience, could help develop new strategies for the treatment of neurodegenerative diseases.

The causes of Parkinson's disease are not yet fully understood. Long before the onset of the typical muscle tremor, the appearance of defective proteins in the brain could be a first sign. Researchers at Empa and the University of Limerick in Ireland have now taken a closer look at the abnormal shape of these alpha-synucleins in the form of protein rings. In doing so, they were also able to visualize at the nanoscale the connection with environmental pollution by copper. This sheds new light on the development of the neurodegenerative disease and the role of biometals in the disease process. In addition, the findings could provide opportunities to improve early detection and therapy of the disease.

What is known about Parkinson's disease is that neurons in the brain die off, resulting in a deficiency of the neurotransmitter dopamine. In the later stages of the disease, this leads to muscle tremors, muscle rigidity and even immobility. The slowly progressive disease is the second most common neurodegenerative disease in the world after Alzheimer's disease. Environmental factors such as pesticides or metals could promote the occurrence of Parkinson's.

The team led by Empa researcher Peter Nirmalraj from the Transport at Nanoscale Interfaces lab is investigating this hypothesis using imaging techniques and chemical spectroscopy as well as, in collaboration with the team of Damien Thompson at the University of Limerick, computer simulations. The researchers are targeting a protein that is involved in several molecular processes in the development of Parkinson's: alpha-synuclein. In affected individuals, this endogenous protein clumps together and causes nerve cells to die. The researchers suspect that copper in high concentrations interferes with these processes and accelerates the disease process.

Images taken with an atomic force microscope show alpha-synuclein in the form of fibrils (left). The fibrils are a few hundred nanometers to one micrometer long. When the protein is placed in a solution containing copper, ring-like structures form instead (right). These annular oligomers are sized between approximately 6-8 nanometers.

To visualize the clumping of the alpha-synuclein at the nanometer scale, Empa researcher Silvia Campioni from the Cellulose & Wood Materials lab produced the protein artificially. Using atomic force microscopy, the researchers were then able to observe the protein, which was initially in solution, over a period of ten days as it formed individual insoluble filamentous structures before finally clumping together to form a dense network of fibrils. Based on the images, the transformation of the soluble protein into clumped fibers about 1 micrometer in length, as they occur during the progression of the disease, can be observed with impressive precision in the laboratory.

If the researchers then added copper ions to the protein solution, completely different structures appeared under the microscope: Ring-shaped protein structures about 7 nanometers in size, so-called oligomers, appeared in the test tube within only a few hours. The existence of such ring-shaped oligomers and their cell-damaging effect are already known. What's more, the longer fiber-like structures appeared earlier than in a copper-free solution. "On the one hand, high doses of copper seem to accelerate the aggregation process," says Peter Nirmalraj. In addition, however, this unusual ring-shaped protein structure develops relatively quickly under the influence of copper, which possibly marks the beginning of the pathological process or even triggers it. The researchers also analyzed the binding of copper ions to alpha-synuclein using molecular dynamics computer simulations in tiny steps of 10 to 100 nanoseconds.

Because the oligomer rings are formed at the very beginning of protein transformation, the rings could be used as a target for new forms of therapy, Nirmalraj hopes. In addition, the findings could help advance the development of a Parkinson's test that could detect the disease at an early stage in body fluids, for example, using samples from the spinal fluid.