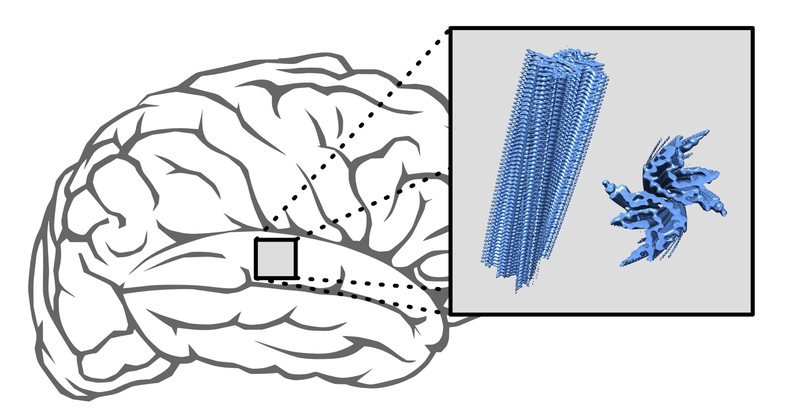 In Parkinson’s and multisystem atrophy, proteins accumulate in layers to form elongated aggregates (blue) that are deposited in the brain. Researchers from Göttingen (Germany) have analysed the molecular structure of these aggregates.

Experts from South Korea, Australia, and Argentina were also involved in the study. The results, published in the scientific journal “Nature Communications”, suggest that Parkinson’s might be related to diverse types of protein aggregates.

Alpha-synuclein is a protein that occurs naturally in the body. It is assumed to be involved in signal transmission between neurons. The protein appears both at the cell membrane and solved – floating, so to speak - in the cell’s interior. In addition to these “normal” variants, there are others that manifest in brain diseases. This applies e. g. to Parkinson’s disease and MSA. Both can be associated with various neurological impairments, including movement disorders. In Parkinson’s and MSA alpha-synuclein molecules stick together. As a result, elongated aggregates arise that are deposited inside neurons and other brain cells. “These deposits successively appear in various areas of the brain. They are a disease hallmark,” explains Prof. Markus Zweckstetter, who heads a research group at the DZNE and the MPI-BPC. “There is evidence that these aggregates are harmful to neurons and promote disease progression.”

The role of misfolded proteins in neurodegenerative diseases

Alzheimer’s, Parkinson’s and Huntington’s disease may have more in common than their effects on the functions of the brain and spinal cord. And finding that common thread could lead to a treatment that could work for all three. A recent study by David Smith, associate professor of biochemistry in the West Virginia University School of Medicine, suggests that at the heart of all three…

These deposits represent a potential starting point for medicines. The idea is that drugs might prevent alpha-synuclein molecules from sticking together or dissolve existing aggregates. To identify potential docking sites for agents, data on the aggregates’ fine structure is required. Thus, the question is: What kind of shape (also known as “folding”) do the molecules adopt within the aggregates? So far, information on this topic had been limited to data from laboratory experiments. “Previous studies investigated the molecular structure of aggregates that were synthesized in a test tube. We asked ourselves how well such artificially produced specimens reflect the patient’s situation. That is why we studied aggregates generated from tissue samples from patients,” said Zweckstetter. “We collaborated closely with international partners on this project. In fact, the tissue samples originated in Australia and the aggregates were synthesized in South Korea. We then did the structural studies in Göttingen.”

Aggregates from brain samples taken from five deceased Parkinson’s patients and five deceased MSA patients were examined. For comparison, the researchers artificially produced different variants of alpha-synuclein aggregates. For this, they used standard procedures. To compare the structure of the different aggregates, they applied nuclear magnetic resonance spectroscopy and other methods.

The variability of Parkinson’s disease could be related to differences in the folding of aggregated alpha-synuclein. This would be in contrast to the ‘one disease-one strain’ hypothesis

The alpha-synuclein proteins of all aggregates contain “beta sheets”, which is in line with previous investigations. Accordingly, the molecular backbone is twisted in a way that the proteins are largely two-dimensional. Within the aggregates, the proteins stick together in layers. However, folding does not encompass the whole protein. Each protein also contains areas that are unstructured. Besides, orientation of the beta sheets bears significance. “It is a question of how much of a protein is folded and also how it is folded,” Zweckstetter stated.

In the structure of the alpha-synuclein associated with Parkinson’s, there were some significant differences between patients. This might be due to the fact that the course of Parkinson’s can vary quite considerably between individuals. “The variability of Parkinson’s disease could be related to differences in the folding of aggregated alpha-synuclein. This would be in contrast to the ‘one disease-one strain’ hypothesis, that is to say that Parkinson’s disease is associated with one, clearly defined aggregate form. However, in view of our relatively small sample of five patients, this is just a guess,” said Zweckstetter. “Yet, our results certainly prove that studies with tissue samples from patients are necessary to complement lab experiments in a sensible way.”

Striatum: where our brain makes decisions