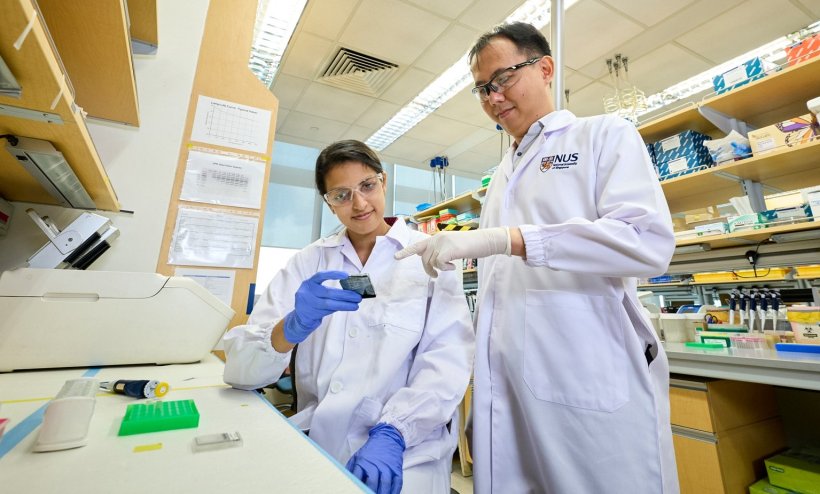 The new method provides a promising non-invasive alternative to tissue biopsies. It costs around S$ 50 (€ 35) from start to finish, compared to other sequencing methods that can cost up to S$ 1,000 (over € 700) to conduct. Led by Assistant Professor Cheow Lih Feng, the team comprising researchers from the NUS Department of Biomedical Engineering under the College of Design and Engineering as well as the NUS Institute for Health Innovation & Technology, is now exploring industry partnerships to bring their technology to market.

The NUS team published their findings in the scientific journal Science Advances, and a patent has also been filed for their discovery.

“When you have a S$ 50 test, it opens up a lot of avenues because it is affordable, so you can do the test quite regularly,” said Asst Prof Cheow, pointing to the potential for their assay to be used in regular cancer monitoring.

We were performing some unrelated experiments, and one of our researchers heated a sample

Current methods of testing for cancers can suffer from a lack of sensitivity or from being too expensive to be used for regular screening. The DNA in our blood, the genetic information that tells our cells how to synthesise proteins and other important biological building blocks, is produced by different organs in our body. Cancer cells also release DNA into the bloodstream that can be detected by analysing blood samples, known as liquid biopsies. However, sifting through all the genetic material in a sample – a method called whole-genome sequencing – can be expensive and labour intensive. Some clinicians instead target cancer-specific signatures in cell-free DNA, almost like hunting for specific faces in a large crowd of people instead of inspecting every single individual. Yet, even such methods can be imperfect, Asst Prof Cheow explained. “Some patients may have cancer signatures that look slightly different and allow them to slip through the screening process,” he said.

Asst Prof Cheow’s team has discovered a way to discard the non-informative sections in a patient’s DNA to target where most cancer-specific biomarkers are concentrated. Our DNA is made up of molecules known as nucleotides: adenine (A), thymine (T), guanine (G) and cytosine (C). Cancer-specific signatures tend to be concentrated in areas of the genome that have high repetitions of C and G nucleotides, known as CpG islands, that make up only around 1% of our genome. “We were performing some unrelated experiments, and one of our researchers heated a sample,” Asst Prof Cheow said, recounting the team’s accidental discovery that heat destroyed non-informative sections of the genome, but left CpG island largely intact. This allowed them to sequence the remaining genome and detect the presence of cancers for a minute fraction of the average market price. “We are getting a much more sensitive assay at almost the same costs as compared to simple protein biomarker tests,” he said, “Our method really concentrates on sequencing these regions that matter the most.”

The Heatrich-BS assay has been trialed at the National Cancer Centre in Singapore, monitoring patients with colorectal cancer. By comparing the results of their blood analysis with CT scans that imaged the size of patients’ tumours, the team found that there was a high correlation between how much cancer-specific DNA was detected in a patient’s blood sample and the size of their tumours over time. “This way, doctors can monitor patients for their response to treatment and tailor their therapy regimes,” Asst Prof Cheow said. He also pointed out that their method has the potential to work universally across all types of cancer since they all demonstrate the property of enriching CpG islands with cancer-specific biomarkers. “It’s a one-size fits all,” he added.

Asst Prof Cheow and his team are now exploring ways to commercialise their assay by partnering with pharmaceutical and biotechnology companies that can help bring the Heatrich-BS assay to market. “We are excited about our results and licensing discussions are underway,” he said.