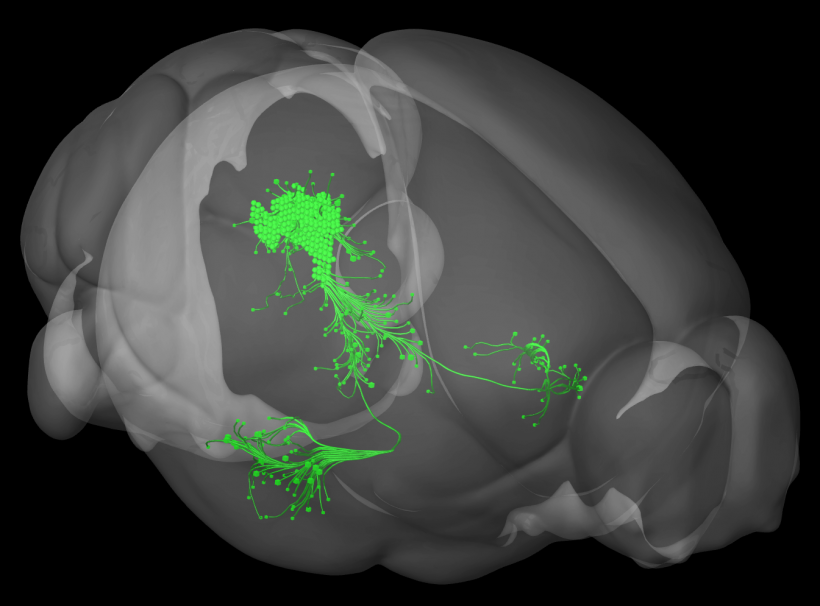 A group of dopamine neurons in the ventral PAG senses aversive events and instructs the amygdala to store these experiences into fear memory.
Allen Institute for Brain Science. Allen Mouse Brain Connectivity Atlas. Available from: connectivity.brain-map.org

A team of neurobiologists, led by scientists at the Research Institute of Molecular Pathology (IMP) in Vienna, has identified a novel neuronal circuit in the midbrain that gates fear learning. They found that the neurotransmitter dopamine, so far merely associated with reward and motivation, plays a crucial role in memory formation following aversive events.

For any higher organism, it is vital to learn from the past to adapt future behaviors. The formation of fear memories is the prime example in this regard. They help us to associate appropriate defensive behaviors with environmental cues such as sounds and smells that predict previously encountered threats like fights or poisonings. Incorrectly processed fear memories can lead to a variety of fear-related conditions, such as post-traumatic stress disorders.

Animals and humans alike live in complex environments and go through countless experiences, many of them meaningless, and some few of them important. In this setting, the brain has to perform a difficult task: it needs to memorize only the essential associations for later recall, while forgetting the unnecessary rest. To elucidate the neuronal implementation of this process, Wulf Haubensak, a neuroscientist and Group Leader at the IMP, wondered if dopamine may play an important role. A widely known hormone for motivation and happiness, it seemed a rather unlikely candidate, at first. However, dopamine has some interesting properties. It is released following important events - such as getting a reward - and thus might act as a signal to memorize such experiences.

Haubensak and his group teamed up with physiologist Volkmar Leßmann and colleagues at the Otto-von-Guericke University in Magdeburg to explore this in animal models. The team conditioned mice to learn that an acoustic signal - the environmental cue - predicts a mild foot shock representing the threat. Using advanced technology such as live calcium-imaging and optogenetics, the scientists were able to track and manipulate specific subsets of neurons in the brain during the learning task. In particular, they found a specific set of neurons in the midbrain called the ventral periaqueductal grey (vPAG). Intriguingly, these neurons become active when the animal begins to learn to associate the cue with the aversive shock - that is, during subjectively important events for the animal. When activated, they release dopamine and instruct the amygdala - a major emotion center in the brain - to associate the tone with the shock and store this experience into synaptic long-term memory. In the experiments, temporally inactivating this connection during fear memory tasks resulted in mice that were no longer able to remember previous fearful experiences, while over-activation lead to excessive memories that would normally be suppressed.

The discovery of the link between these relatively unknown dopamine neurons in the ventral PAG and the amygdala was key to connecting the dopamine-system to fear memory formation. “This finding adds a completely different angle to dopamine neurons, widely regarded as responsible for reward and motivation only”, says Florian Grössl, first author of the publication and a Postdoc in the Haubensak-lab. “Our study shows that they direct fear memory formation and reveals a new dopaminergic circuit module between the PAG and the amygdala that is crucial for emotion processing: it filters out important experiences and stores them into associative memory.”

In humans, dopamine neurons originating from the PAG-region are wired in a very similar way as in mice. They are involved in pain processing and have recently been shown to also play a role in memory formation. Following the discovery by the Haubensak-team, it would be important to investigate if dysregulation of ventral PAG dopamine neurons could lead to psychiatric disorders. They might also provide a clue to side effects observed in patients that are treated with medication affecting the dopamine system, as in Parkinson’s disease and addiction disorders.