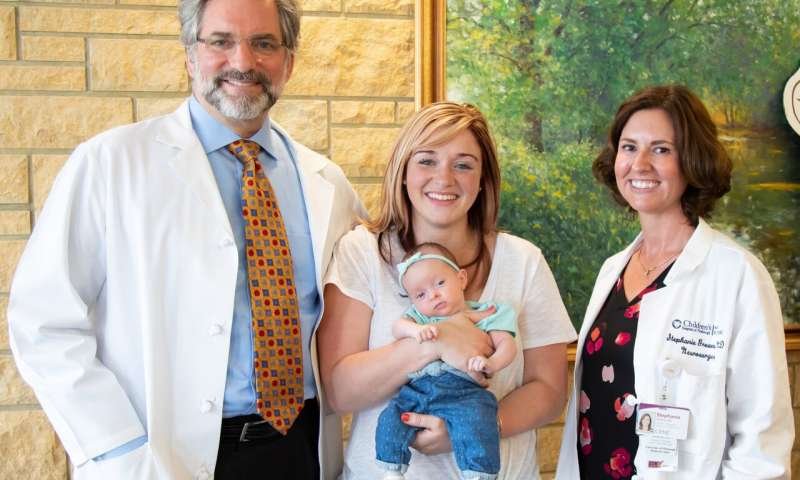 A team of specialists at UPMC Magee-Womens Hospital and UPMC Children's Hospital of Pittsburgh have performed UPMC's first in-utero surgery to close an open neural tube defect in a baby months before her birth.

Spina bifida affects about 1,500 babies born each year in the United States. At UPMC Children's Hospital, physicians close defects like this one in 10 to 20 infants each year following delivery. This procedure has been performed at several centers across the United States but has not been available in this area. In January 2019, an interdisciplinary team of maternal-fetal medicine, obstetric anesthesiology, neonatology and pediatric neurosurgery specialists from both UPMC Magee and UPMC Children's performed and assisted during the complex surgery on Mullen and her unborn baby, who was at 25 weeks gestation at the time. "This surgery is risky, but research shows that babies who are closed in-utero have better neurologic outcomes than babies treated after birth," said Stephen Emery, M.D., director of Center for Innovative Fetal Intervention, UPMC Magee.

A randomized controlled trial published in the New England Journal of Medicine showed that, compared to surgery after birth, fetal surgery resulted in improved leg function and halved the risk for hydrocephalus—fluid buildup in the brain—a common complication of spina bifida. "Being able to perform this surgery in-utero offers many benefits to the baby, but one of the most important is improving the chances a child will be able to walk on their own," said Stephanie Greene, M.D., director of Vascular and Perinatal Neurosurgery, UPMC Children's Hospital.

Two months following the prenatal surgery, Mullen's baby girl, Emery Greene Mullen, named after the lead surgeons, was born. "Our initial tests show that Emery has almost entirely normal leg function. It can take up to a year to rule out hydrocephalus, but we are very hopeful. The neurologic outcome is definitely better than if her surgery had been done after birth," added Greene, associate professor of Neurological Surgery, University of Pittsburgh School of Medicine.

"Pregnant women diagnosed with fetal spina bifida might very well be candidates for the in-utero procedure," added Emery, associate professor of Obstetrics, Gynecology, & Reproductive Sciences, Divisions of Ultrasound and Maternal-Fetal Medicine, UPMC Magee. "We are excited and proud to now offer this service at UPMC Magee to patients living in the western Pennsylvania and tri-state regions."

"To be the first patient in Pittsburgh, I hope mothers will learn about my story and the hope for Emery's future, and if they are in the same position as me, they will know there is an option and it is close to home," said Allee Mullen. "I thank Dr. Emery, Dr. Greene and the entire team for what they did for Emery and our family."

The COVID-19 pandemic has led to deficiencies and large inequalities in the care of mothers and newborns in Europe.

An ultra-thin 'computer on the bone'

Researchers have developed an ultra-thin wireless device, called osseosurface electronic, that grows to the surface of bone and could someday help physicians monitor bone health and healing over long…

A study found that women who contract Covid-19 during pregnancy are at significantly higher risk of developing pre-eclampsia. In their study, researchers said their systematic review shows that women…