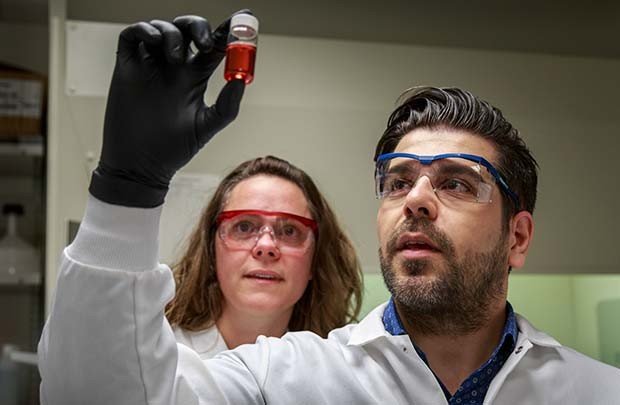 Drs. Jen Adair (left) and Reza Shahbazi examine a test batch of gold nanoparticles at Adair's lab at Fred Hutch. The nanoparticles turn red when gold ions clump together, which changes how the particles emit light.

Scientists at Fred Hutchinson Cancer Research Center took a step toward making gene therapy more practical by simplifying the way gene-editing instructions are delivered to cells. Using a gold nanoparticle instead of an inactivated virus, they safely delivered gene-editing tools in lab models of HIV and inherited blood disorders.

It’s the first time that a gold nanoparticle loaded with CRISPR has been used to edit genes in a rare but powerful subset of blood stem cells, the source of all blood cells. The CRISPR-carrying gold nanoparticle led to successful gene editing in blood stem cells with no toxic effects. “As gene therapies make their way through clinical trials and become available to patients, we need a more practical approach,” said senior author Dr. Jennifer Adair, an assistant member of the Clinical Research Division at Fred Hutch, adding that current methods of performing gene therapy are inaccessible to millions of people around the world. “I wanted to find something simpler, something that would passively deliver gene editing to blood stem cells.” 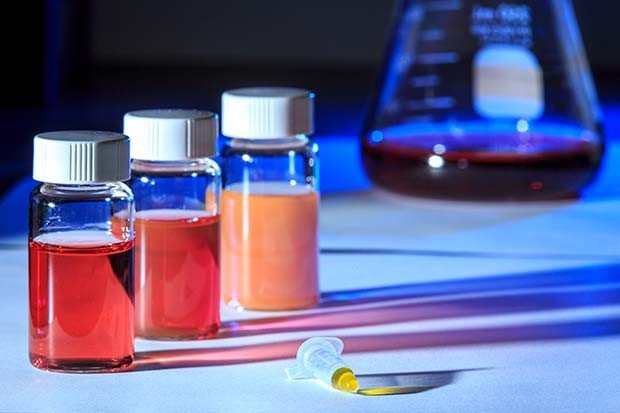 Vials containing gold nanoparticles for gene editing. When gold ions clump together they turn red. The small lab tube in the foreground containing a yellow liquid is of individual gold ions before they form particles.

While CRISPR has made it faster and easier to precisely deliver genetic modifications to the genome, it still has challenges. Getting cells to accept CRISPR gene-editing tools involves a small electric shock that can damage and even kill the cells. And if precise gene edits are required, then additional molecules must be engineered to deliver them — adding cost and time.

Gold nanoparticles are a promising alternative because the surface of these tiny spheres (around 1 billionth the size of a grain of table salt) allows other molecules to easily stick to them and stay adhered. “We engineered the gold nanoparticles to quickly cross the cell membrane, dodge cell organelles that seek to destroy them and go right to the cell nucleus to edit genes,” said Dr. Reza Shahbazi, a Fred Hutch postdoctoral researcher who has worked with gold nanoparticles for drug and gene delivery for seven years.

Shahbazi made the gold particles from laboratory-grade gold that is purified and comes as a liquid in a small lab bottle. He mixed the purified gold into a solution that causes the individual gold ions to form tiny particles, which the researchers then measured for size. They found that a particular size – 19 nanometers wide – was the best for being big and sticky enough to add gene-editing materials to the surface of the particles, while still being small enough for cells to absorb them. 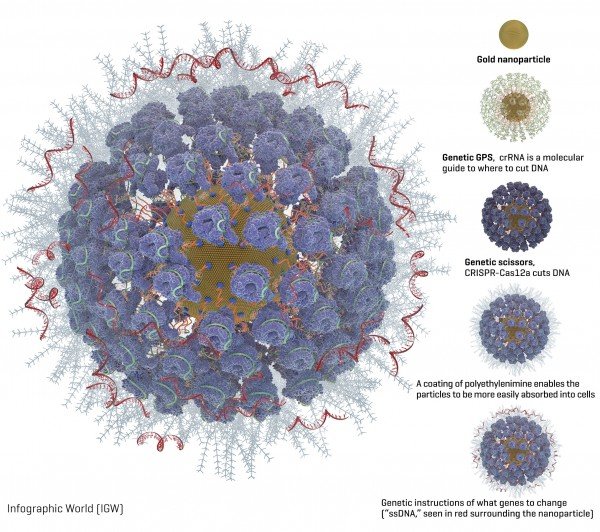 Diagram of a gold nanoparticle loaded with gene editing tools, with descriptions of different components (ex CRISPR) that are part of the nanoformulation.

Credit: Courtesy of the Adair lab at Fred Hutch.

Then the researchers isolated blood stem cells with a protein marker on their surface called CD34. These CD34-positive cells contain the blood-making progenitor cells that give rise to the entire blood and immune system. “These cells replenish blood in the body every day, making them a good candidate for one-time gene therapy because it will last a lifetime as the cells replace themselves,” Adair said. 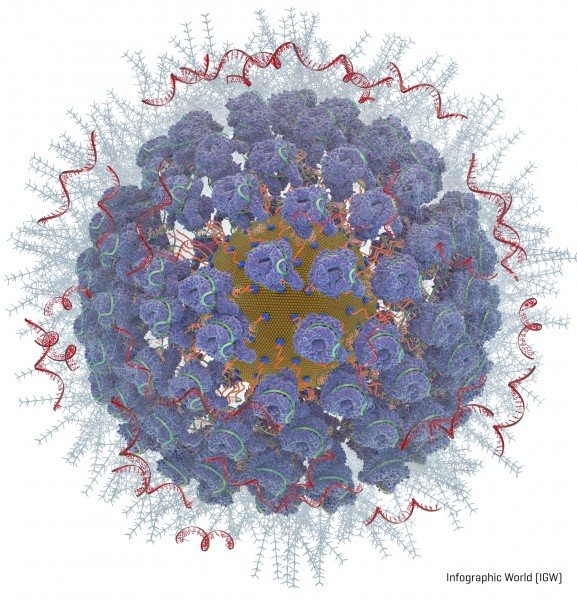 Diagram of a gold nanoparticle loaded with gene editing tools, including CRISPR.

Credit: Courtesy of the Adair lab at Fred Hutch

Observing human blood stem cells in a lab dish, the researchers found that their fully loaded gold nanoparticles were taken up naturally by cells within six hours of being added and within 24 to 48 hours they could see gene editing happening. They observed that the Cas12a CRISPR protein partner was better at delivering very precise genetic edits to the cells than the more commonly used cas9 protein partner.

The gene-editing effect reached a peak eight weeks after the researchers injected the cells into mouse models; 22 weeks after injection the edited cells were still there. The Fred Hutch researchers also found edited cells in the bone marrow, spleen and thymus of the mouse models, a sign that the dividing blood cells in those organs could carry on the treatment without the mice having to be treated again. “We believe we have a good candidate for two diseases — HIV and hemoglobinopathies — though we are also evaluating other disease targets where small genetic changes can have a big impact, as well as ways to make bigger genetic changes,” Adair said. “The next step is to increase how much gene editing happens in each cell, which is definitely doable. That will make it closer to being an effective therapy.”

In the study, the researchers report 10 to 20 percent of cells took on the gene edits, which is a promising start, but the researchers would like to aim for 50% or more of the cells being edited, which they believe will have a good chance of combatting these diseases.

Adair and Shahbazi are looking for commercial partners to develop the technology into therapies for people. They hope to begin clinical trials within a few years.

Understanding every step in the life cycle of a virus is crucial for identifying potential targets for treatment. Now, scientists at the Institute of Science and Technology (IST) Austria were able to…

Worm infestation in the gut can lower viral defenses

Infection with parasitic intestinal worms (helminths) can apparently cause sexually transmitted viral in-fections to be much more severe elsewhere in the body. This is shown by a study led by the…