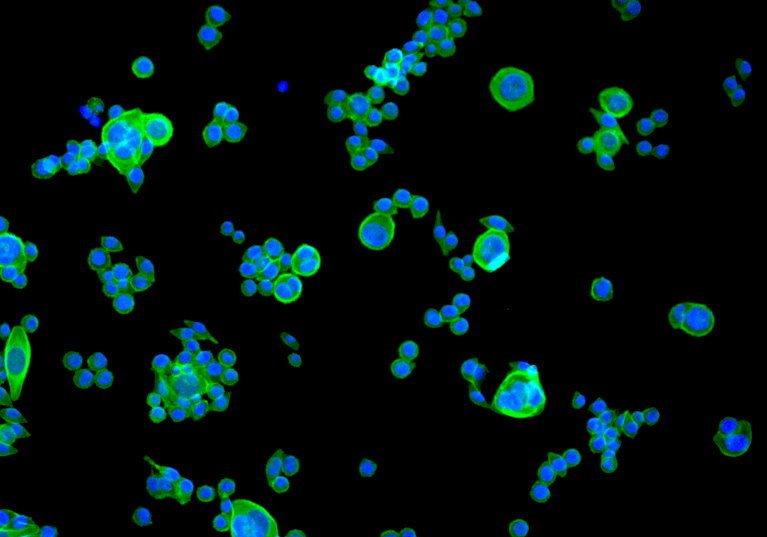 Colorectal cancer cells after treatment with FOLFOXIRI chemotherapy for 34 weeks. Cell fibers (in green) and nuclei (in blue).

The team has used an optimized combination of drugs belonging to the class of tyrosine kinase inhibitors, which take different pathways to attack cancer cells than chemotherapy. These results, which have been published in the journal Cancers, open up new avenues for overcoming treatment resistance and for developing new therapies that are more targeted than chemotherapy.

Colorectal cancer is the third most diagnosed cancer in the world and second only to lung cancer in terms of mortality. It most often develops from the age of 50 in the terminal part of the colon. It results from a change in the DNA of certain cells present in this organ. These cells become cancerous and proliferate in an uncontrolled manner until they form a primary tumour. As in many cancers, these cells can migrate to other parts of the body and form secondary tumours. This is known as metastatic cancer. While genetics play a role in the development of the disease, the presence of inflammatory bowel diseases (e.g. Crohn’s disease) and certain dietary habits (alcohol, red meat) are also risk factors. In the case of a primary tumour, treatment is based on surgery and chemotherapy. In the case of secondary tumours, it is based on a combination of chemotherapies. These treatments are non-targeted and aggressive. They cause significant side effects. They also lead to progressive resistance to treatment in majority of patients.

A team led by Patrycja Nowak-Sliwinska, an associate professor in the School of Pharmaceutical Sciences at the Faculty of Science of the UNIGE, has succeeded in studying precisely this resistance phenomenon in cancer cells. The team has also discovered a way to overcome it by using a combination of tyrosine kinase inhibitors. Tyrosine kinases allow the transport of a phosphate group to a key protein for cell division and growth. With a specific mixture of inhibitor molecules, these enzymes are "blocked" and this transport is interrupted. The proliferation of tumour cells is then stopped or slowed down.

To make this discovery, the UNIGE team used cancer cell lines from different patients. After letting these cells proliferate in the laboratory, they exposed them chronically to FOLFOXIRI, the most common chemotherapy combination for treating colorectal cancer. ‘After about 34 to 50 weeks of exposure, we managed to obtain in vitro this phenomenon of acquired chemoresistance, as we observe in a clinical situation’, explains Nowak-Sliwinska, the last author of the study.

The scientists then noted that the resistant cells showed a desensitization of the plasma membrane, i.e. their envelope, which had become less permeable to the molecules coming from the chemotherapeutic products. They therefore do not penetrate or no longer penetrate sufficiently inside these cells. Still within this membrane, the researchers observed a deregulation of certain genes responsible for the lipid circulation networks, which must be specified. ‘We then exposed the resistant cells to a combination of tyrosine kinase inhibitors previously optimized in our laboratory. We noticed that they made it possible to overcome this resistance by taking another "path" than the one used by the chemotherapy molecules to signal the cell,’ says George M. Ramzy, a PhD student in the School of Pharmaceutical Sciences at the Faculty of Science of the UNIGE and first author of the study.

The research team succeeded in blocking up to 82% of the metabolic activity of these cells - i.e. their energy supply - and thus considerably weakening them. This discovery opens up new avenues for overcoming the phenomenon of resistance in colorectal cancer, which is responsible for the low five-year survival rate of patients. ‘In addition to overcoming resistance, this treatment has the advantage of acting in a targeted manner. Its action is specific to tumour cells, which is not the case with chemotherapies, which act aggressively on a broader spectrum of cells,’ concludes Nowak-Sliwinska.

Treating colon cancer with vitamin A

A leading cause of cancer deaths worldwide, colon cancer is famously resistant to treatment. There are many reasons for this, but one has to do with a group of persisting cancer cells in the colon…

A single dose of an FDA-approved intravenous nutrition source may be able to significantly reduce the toxicity and increase the bioavailability of platinum-based cancer drugs, according to a study by…