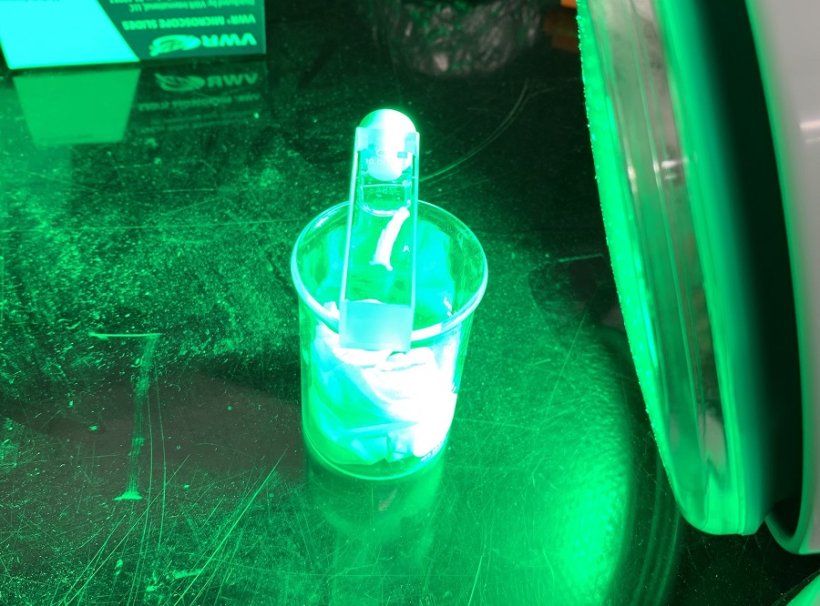 Material coated in polymer in small scale tests with a green lamp.

In the future, you might be able to spray it on fabric yourself. “When you’re walking into a hospital, you want to know that pillow you’re putting your head onto is clean,” says lead author Taylor Wright, a doctoral student in the department of chemistry. “This coating could take a little bit of the worry off frontline workers to have Personal Protection Equipment with antimicrobial properties.”

Researchers soaked fabric in a solution of a bacteria-killing polymer which contains a molecule that releases sterilizing forms of oxygen when light shines on it. They then used an ultraviolet (UV) light to turn this solution to a solid, fixing the coating to the fabric. “This coating has both passive and active antimicrobial properties, killing microbes immediately upon contact, which is then amped up when sunlight hits the cloth,” says senior author Dr. Michael Wolf, a professor of chemistry.

Both components are safe for human use, and the entire process takes about one hour at room temperature, says Wright. It also makes the fabric hydrophobic, meaning microbes are less likely to stick to the cloth, and doesn’t seem to affect the strength of the fabric.

In addition, the coating can be used on almost any fabric, including cotton, polyester, denim, and silk, with applications in hospital fabrics, masks, and activewear. Whereas other such technologies can involve chemical waste, high energy use, or expensive equipment, the UBC method is relatively easy and affordable, says Wright. “All we need is a beaker and a light bulb. I’m fairly certain I could do the whole process on a stove.”

To test the coating’s bug-killing properties, the researchers bathed treated fabric in bacterial soups of Escherichia coli (E. coli) and Methicillin-resistant Staphylococcus aureus (MRSA), both major sources of hospital-acquired infections. They found there were 85 per cent of viable E. coli bacteria remaining after 30 minutes, which fell to three per cent when the treated cloth was exposed to green light for the same amount of time. Similarly, 95 per cent of viable MRSA bacteria remained, dropping to 35 per cent under green light. No bacteria remained after four hours. 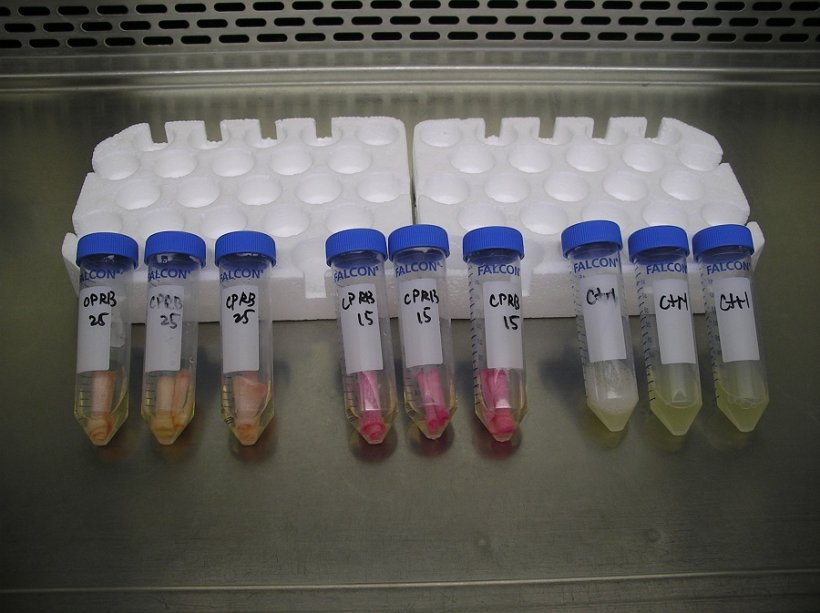 Given that sunlight or fluorescent lights have a lesser percentage of green, the team expects similar but less intense results for fabric exposed to those light sources, says Wright. “Particularly in the Pacific Northwest, it’s not always a sunny day. So, at all times you’re going to have that layer of passive protection and when you need that extra layer of protection, you can step into a lit room, or place the fabric in a room with a green light bulb – which can be found for about $35 online.”

The researchers also looked into whether the coating reduced the infectivity of SARS-CoV-2, the virus causing COVID-19 by bathing treated fabric in a solution of the virus particles and then adding that solution to living cells to see if they could infect them. They found the passive properties weren’t effective against the virus, but when treated fabric was exposed to green light for two hours, there was up to 90 per cent decrease in the infectivity of SARS-CoV-2. “In other words, only one tenth of the amount of virus signal was detected on cells infected with the UV-fabric and light treated virus”, says co-author Dr. François Jean, professor of virology at UBC. The efficacy of the new fabric against SARS-CoV-2 was demonstrated by Dr. Jean’s team at UBC FINDER.

The team found they needed an 18 square centimetre piece of fabric to kill microbes with material containing seven per cent weight of the active ingredient, but that increasing this to 23 per cent weight increased the effectiveness of the fabric at four times less material, says Wright.

Researchers also found that keeping the fabric under green light for more than 24 hours failed to produce the sterilizing forms of oxygen, highlighting an area for further study. This is a similar effect to the colour fading on clothing after being exposed to sunlight for too long.

“Biomanufacturing face masks based on this new UBC technology would represent an important addition to our arsenal in the fight against COVID-19, in particular for highly transmissible SARS-CoV-2 variants of concern such as Omicron”, says Dr. Jean. The coating can also be used for activewear, with an ‘anti-stink’ coating applied to areas where people tend to sweat, killing off the bacteria that makes us smell. Indeed, hospital fabric and activewear companies are already interested in applying the technology, and the university has applied for a patent in the United States, says Dr. Wolf.

Covid: two years later, half of patients still have symptoms

Two years after infection with COVID-19, half of patients who were admitted to hospitals still have at least one symptom, according to the longest follow-up study to date.