Contrast-enhanced mammography is a special type of mammogram that is performed with the injection of contrast media into the arm vein, on patients whose standard breast imaging tests are inconclusive. Use of CEM is increasing across Europe, according to Jacopo Nori, Head of the Breast Center at Careggi Hospital in Florence, Italy, who started using the modality in 2016. ‘We used to do one session per week, now we’re doing five, in which we attend up to 40 patients,’ he said.

CEM provides high sensitivity and specificity, comparable to those obtained with MRI, he explained. ‘We can see a lot more of suspicious area, which in over 40 percent turns out to be malignant or premalignant,’ Nori said. Nori and his team prefer to use CEM because it’s widely available, and easier and faster than MRI. ‘Patients tolerate CEM better and surgeons find it easier to work with, as they can interpret imaging findings more easily.'

The team has performed nearly 5,000 examinations with the modality, gathering one of the largest experience with the technique in Europe. ‘We’re very fond of the modality,’ Nori said. ‘I’m sure this is the future of imaging, because it’s immediate, comfortable and cheap, and the radiation dose is not high. If we do a short protocol, it’s the same radiation dose as in tomosynthesis.’

CEM is typically used in the preoperative setting in women with very dense breasts, very young patients and women with a very high risk of developing breast cancer. The team performs CEM or MRI examinations without distinction, depending on the equipment’s availability. MRI remains the modality of choice in the case of deep lesions that cannot be seen on CEM.

B3 lesions, i.e., lesions that may be associated with malignant disease and thus require surgical intervention, are becoming an increasingly important indication for CEM. ‘CEM could enable us to select patients who will have to undergo surgery or need imaging follow-up,’ Nori explained. The team is removing B3 lesions not only with surgery but also interventional radiology, such as vacuum assisted excision (VAE). ‘CEM is very useful to select the right patients to undergo these interventions,’ he said. ‘CEM enables us to see clearly if there’s a chance of finding cancer or not.’ If the CEM examination reveals no enhancement, radiologists have a good reason not to suspect malignancy and can thus choose to remove the lesion using VAE and local anaesthesia. 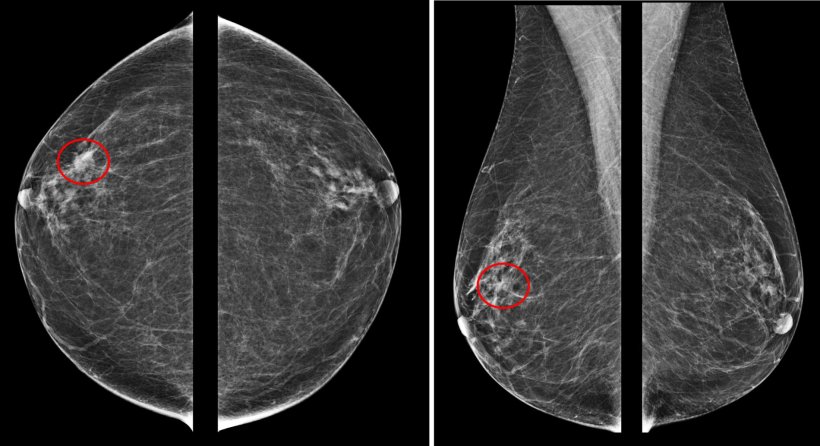 The main limitations of CEM are lack of literature and data, as well as false negatives. Radiologists can however easily learn to distinguish between true positives and false negatives, Nori believes. ‘Compared to MRI, CEM is easy to learn,’ he said. ‘Even the youngest specialists are working with it easily and learning how to report fast.’

Another significant obstacle is that biopsy under contrast guidance is not currently available in Europe - unlike the US, where it has received FDA clearance. A fair amount of lesions can thus not be analysed. On the other hand, Nori and his team identified the suspicious lesion seen on CEM with second look ultrasound or second look 2D or 3D mammography in 80 percent of cases.

Profile:
Dr. Jacopo Nori is a consultant breast radiologist and the Chief of Breast Imaging at Careggi University Hospital in Florence, Italy. He has completed attachments at the Institute Gustave Roussy in Paris, Montpellier University Hospital in France, and the Memorial Sloan Kettering Cancer Center in New York. Besides breast tomosynthesis and tomo guided biopsies, magnetic resonance imaging and contrast enhanced breast imaging, Dr. Nori’s interests also include radiofrequency and laser ablation of breast lesions and B3 lesion removal with VABB systems.

News • Knowledge base for radiologists

In an effort to promote access to professional breast imaging knowledge, the European Society of Radiology (ESR) now links to educational materials from DenseBreast-info.org as a resource for its…

In the emerging era of personalized medicine, risk-based breast cancer screening protocols may be better than the one-size-fits all approach. It’s time to consider adopting them, Jack Cuzick,…