These questions drove a team of researchers at the University of Michigan Comprehensive Cancer Center and Michigan Engineering to develop a tiny device designed to solve these big questions. “It’s especially important to be able to capture those leader cells and understand their biology – why are they so successful, why are they resistant to traditional chemotherapy and how can we target them selectively?” says study author Sofia Merajver, M.D., Ph.D., scientific director of the Breast Oncology Program at the University of Michigan Comprehensive Cancer Center. “Microfluidic devices are helping us understand biology that was previously not accessible,” she says.

The problem with existing microfluidic devices is that the cells don’t last long within them. Devices typically lend themselves to brief experiments of several days. But the characteristics of cancer cells change over time. “A lot of tumor processes like invasion and resistance don’t happen overnight. Our goal was to track the long-term evolution of invasion,” says lead study author Koh Meng Aw Yong, Ph.D., a postdoctoral fellow in Merajver’s lab. “We cannot look at just a certain time point, like in a three-day experiment. That might not represent what’s happening in the body over time.” 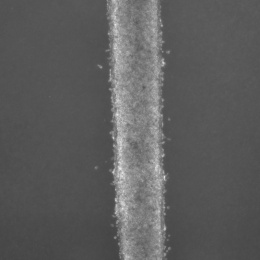 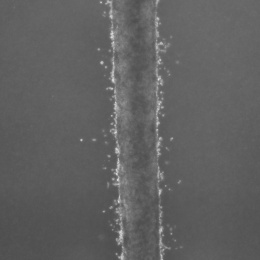 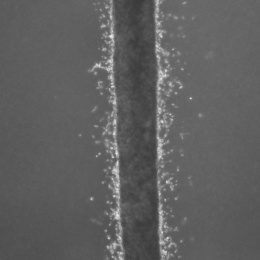 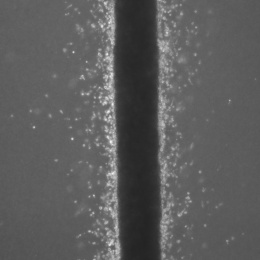 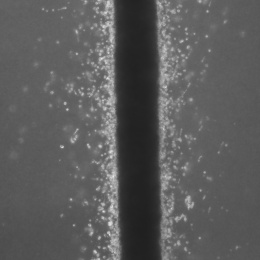 So the team developed a new fluidic device to allow them to cultivate cells for longer periods of time. Researchers found the device was stable up to at least three weeks in culture. Their results are published in Scientific Reports.

The cells look like a thin milky line in a chamber that’s smaller than a pillbox. They are actually suspended in three dimensions, unlike typical fluidic devices that capture cells in two dimensions. It allows researchers to feed the cancer cells into the device with very minimal disturbance or change to the cells.

The device consists of three tiny molded channels through which cells flow. The cells are fed into one channel. Fluid flows through a parallel channel to provide pressure and flow without disturbing the culture. The flow of fluid through the outer channel mimics what happens with the body’s capillaries. “These forces are important and incorporate everything into one system,” Aw Kong says.

The researchers tested the device with two lines of metastatic prostate cancer cells. They were able to isolate the leader cells – those cells that first broke off and would be traveling to distant organs. After two weeks, they found that the cells from one line were twice as invasive as the other cell line. But by three weeks, that difference was gone, suggesting that the invasive potential of cells may change over time.

The hope is that researchers can find differences in the molecular signature between cells that invade and those that don’t. Then, they would target the molecular underpinning with therapies to prevent cancer from invading – essentially keeping the cancer confined and preventing metastasis. “The device also holds potential to be used to test drugs and detect when cancer becomes resistant. This would allow oncologists to know sooner if a therapy is not working, and perhaps switch the patient to another option," says senior study author Jianping Fu, Ph.D., associate professor of mechanical engineering at the University of Michigan. “Of course, more research is needed to explore this possibility in the future.”

“We think we can grow this while the patient is undergoing treatment or monitoring. The device would be able to show us if the cells become more aggressive before a traditional imaging test would detect anything,” Aw Yong says.

Researchers next want to extend the work to triple-negative breast cancer, a particularly aggressive form of the disease. Once the leader cells are identified, they will also begin looking at whether these cells have different genetic or molecular markers than the less-aggressive cells.

Some cancer cells can lose their ability to migrate

In a new study, researchers from Kanazawa University show how some intestinal cancer cells lose their ability to spread as they divide and can be eliminated as the cancer grows.