CRISPR is also known as the "gene-editing scissors". However, the technique has several flaws.

Researchers from the University of Illinois at Chicago are the first to describe why CRISPR gene editing sometimes fails to work, and how the process can be made to be much more efficient. CRISPR is a gene-editing tool that allows scientists to cut out unwanted genes or genetic material from DNA, and sometimes add a desired sequence or genes. CRISPR uses an enzyme called Cas9 that acts like scissors to cut out unwanted DNA. Once cuts are made on either side of the DNA to be removed, the cell either initiates repair to glue the two ends of the DNA strand back together, or the cell dies.

In a study published in the journal Molecular Cell, the researchers showed that when gene editing using CRISPR fails, which occurs about 15 percent of the time, it is often due to persistent binding of the Cas9 protein to the DNA at the cut site, which blocks the DNA repair enzymes from accessing the cut. 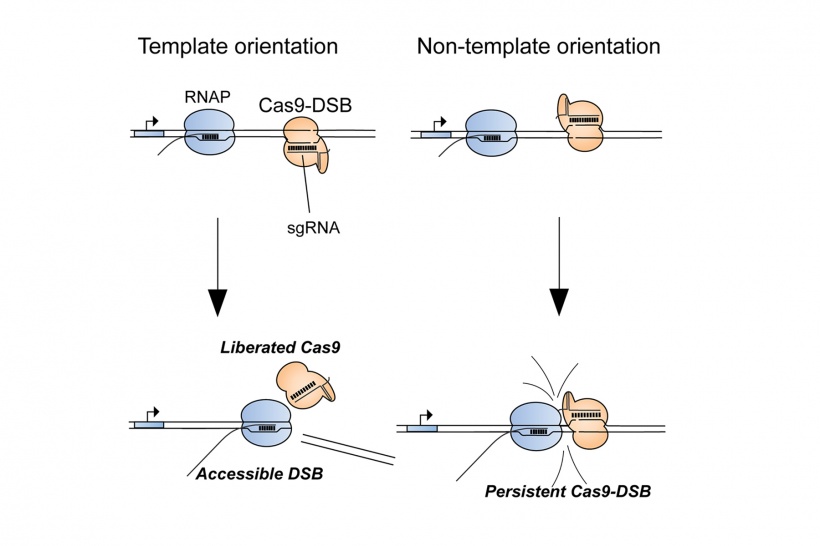 UIC researchers show persistent Cas9 binding to a double strand break causes CRISPR genome editing to fail about 15 percent of the time. When RNA polymerases collide with Cas9 from one direction (template orientation), they can dislodge Cas9 and increase genome editing efficiency.

Senior author Bradley Merrill, associate professor of biochemistry and molecular genetics in the UIC College of Medicine, says that before now, researchers did not know why the process randomly failed. “We found that at sites where Cas9 was a ‘dud’ it stayed bound to the DNA strand and prevented the cell from initiating the repair process,” Merrill said. The stuck Cas9 is also unable to go on to make additional cuts in DNA, thus limiting the efficiency of CRISPR, he said.

Merrill, UIC graduate student Ryan Clarke, and their colleagues also found that Cas9 was likely to be ineffective at sites in the genome where RNA polymerases — enzymes involved in gene activity — were not active. Further investigation revealed that guiding Cas9 to anneal to just one of the strands making up the DNA double helix promoted interaction between Cas9 and the RNA polymerase, helping to transform a “dud” Cas9 into an efficient genome editor. Specifically, they found that consistent strand selection for Cas9 during genome editing forced the RNA polymerases to collide with Cas9 in such a way that Cas9 was knocked off the DNA. “I was shocked that simply choosing one DNA strand over the other had such a powerful effect on genome editing,” said Clarke, the lead author of the paper. “Uncovering the mechanism behind this phenomenon helps us better understand how Cas9 interactions with the genome can cause some editing attempts to fail and that, when designing a genome editing experiment, we can use that understanding to our benefit.”

“This new understanding is important for those of us who need genome editing to work well in the lab and for making genome editing more efficient and safer in future clinical uses,” Merrill said.

The study findings are also significant because, in the genome editing process, the interaction between Cas9 and the DNA strand is now known to be the “rate-limiting step,” said Merrill. This means that it is the slowest part of the process; therefore, changes at this stage have the most potential to impact the overall duration of genome editing. “If we can reduce the time that Cas9 interacts with the DNA strand, which we now know how to do with an RNA polymerase, we can use less of the enzyme and limit exposure,” Merrill said. “This means we have more potential to limit adverse effects or side effects, which is vital for future therapies that may impact human patients.”

Source: University of Illinois at Chicago