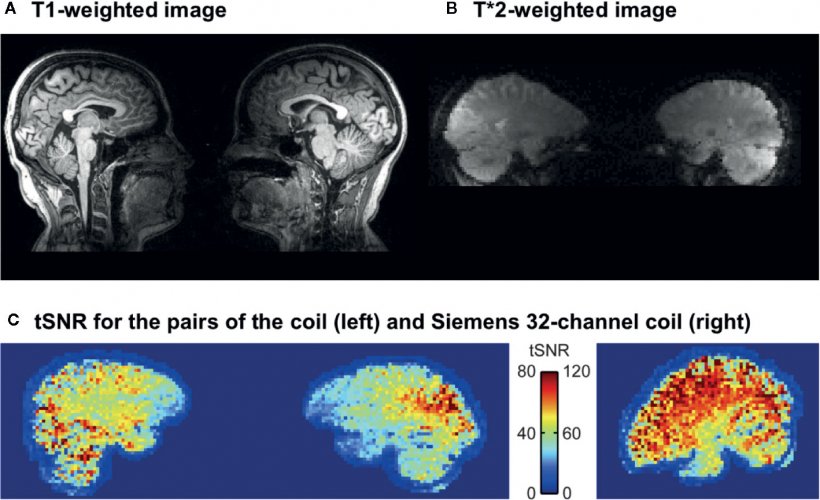 Representative single-dyad T1 (A) and T*2 (B) -weighted images acquired with the dual coil. (C) tSNR for the dual coil and (D) conventional Siemens 32-channel head coil. Note that in due to preprocessing, the data from the dual coil pairs in panel (C) are further away from each other than they actually are (c.f. panel B).

In a recent study, the researchers scanned brain activity from 10 couples. Each couple spent 45 minutes inside the MRI scanner in physical contact with each other. The objective of the study was to examine how social contact activates the brain. The results were published in the theme issue Social Interaction in Neuropsychiatry of the journal Frontiers in Psychiatry. “This is an excellent start for the study of natural interaction. People don’t just react to external stimuli, but adjust their actions moment-by-moment based on what they expect to happen next,” says Riitta Hari, emerita Professor at Aalto University.

Ordinary magnetic resonance imaging is used to scan one person at a time. In the device developed at Aalto University, the head coil used for regular brain scans was divided into two separate coils. This new design allows for simultaneous scanning of two brains, when the individuals are positioned close enough to each other inside the scanner. During scanning, the participants were face-to-face, almost hugging each other. When instructed by the researchers, the subjects took turns in tapping each other's lips. Looking at the brain scans, the researchers could see that the motor and sensory areas of the couples’ brains were activated.

This Christmas marks the 20th anniversary of the publication of “Magnetic resonance imaging of male and female genitals during coitus and female sexual arousal” in The BMJ. In its first year, it picked up the IgNobel prize for medicine, and has since become one of the most downloaded BMJ articles of all time. Dr Tony Delamothe, a former editor at The BMJ, ponders on its success.