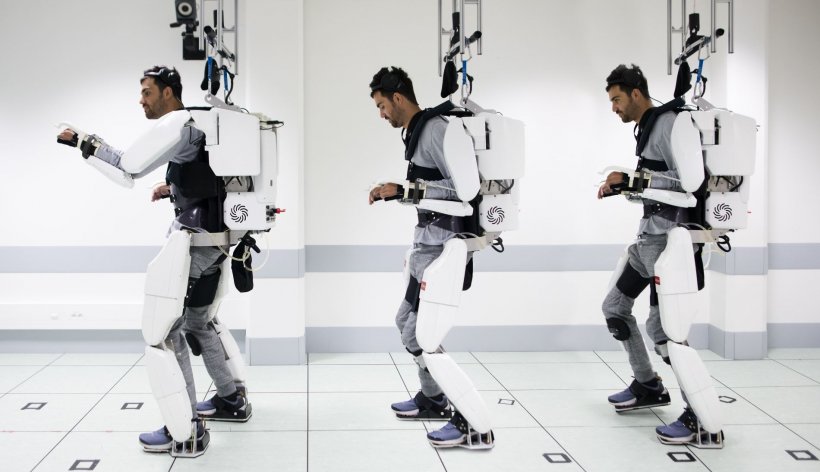 A four-limb robotic system controlled by brain signals helped a tetraplegic man to move his arms and walk using a ceiling-mounted harness for balance.

Developed by CEA (French Alternative Energies and Atomic Energy Commission), the system is driven via the long-term implant of a semi-invasive medical device to record brain activity. ‘This device is an important step forward in helping people with disabilities become self-sufficient,’ said Professor Alim-Louis Benabid, President of the Clinatec Executive Board, a CEA laboratory.

Tetraplegia is caused by a lesion on the spinal cord that prevents the nervous system from controlling all four limbs. To limit dependency and facilitate the mobility of patients with this severe disability, medical doctors, physicians and researchers at Clinatec, a collaboration of the CEA laboratory in Grenoble and Grenoble university hospital, have developed a neuroprosthetic – called WIMAGINE – to decode brain signals and control the exoskeleton. ‘Ours is the first semi-invasive wireless brain-computer system designed for long-term use to activate all four limbs,’ explained Professor Alim-Louis Benabid. ‘Previous brain-computer studies have used more invasive recording devices implanted beneath the outermost membrane of the brain, where they eventually stop working. They have also been connected to wires, limited to creating movement in just one limb, or have focused on restoring movement to patients’ own muscles.’

From technology to clinical trials

With the authorisation of regulatory authorities, Clinatec has conducted a clinical trial to test the device on a 28-year-old tetraplegic patient who is paralysed from the shoulders down, with only some movement in his biceps and left wrist. In June 2017, Professor Stephan Chabardes, a neurosurgeon at CHU of Grenoble-Alpes, France, and Medical Director at Clinatec, implanted the devices on the right and left sides of the upper sensorimotor area of the brain, above the patient’s dura mater.

The electrocorticograms recorded are decoded in real-time to predict the deliberate movement imagined by the patient and then, for example, to control the corresponding limb of an exoskeleton. ‘Innovative adaptive algorithms, based on machine learning, have been developed to decode a large number of degrees of freedom. The exceptional quality of the collected neural signals allowed a stable and robust decoding,’ said Dr Tetiana Aksenova, Brain Computer Interface (BCI) signal processing research director from the University of Grenoble, France.

Since the operation, the patient has spent 27 months training the algorithm to understand his thoughts and to progressively increase the number of movements he could make. The patient’s progress was measured in terms of how many degrees of freedom he could achieve during tasks, from operating a brain-powered switch to start walking, to reaching out to touch 2-D and 3-D objects. The exoskeleton had 14 joints and 14 degrees of freedom, allowing it to move in 14 different ways. The patient spent 45 days operating the exoskeleton in the lab, and the skills he acquired were reinforced with 95 days spent training at home, with a researcher using an avatar and video game similar to Pong.

A few months after surgery, he was successful 73% of the time during six sessions wearing the exoskeleton. Using the avatar, video game and exoskeleton combined, he covered 145 metres with 480 steps over 39 sessions. When fitted with the suspended exoskeleton, he can take several successive steps and control his two upper limbs in three dimensions. He also can rotate his wrists while sitting or standing. ‘Our patient already considers his rapidly increasing prosthetic mobility to be rewarding, but his progress has not changed his clinical status,’ Benabid pointed out.

While early results are promising, the researchers note that the system is a long way from clinical application and will require improvements before becoming widely available. Three further tetraplegic patients have been recruited to take part in this clinical trial in the coming years. The next goal of the researchers is to solve the problem of allowing a patient to walk and balance autonomously without using a ceiling suspension system. ‘Our findings could move us a step closer to helping tetraplegic patients to drive computers using brain signals alone, perhaps starting with driving wheelchairs using brain activity instead of joysticks and progressing to developing an exoskeleton for increased mobility,’ Chabardes concluded.

GreenBone Ortho, a company specialising in bone regeneration, announces that it has achieved its aim of recruiting 15 patients into the GreenBRIC study. GreenBRIC study is a prospective, open label,…

Talking to a 'robotic doc'? Most patients wouldn't mind

In the era of social distancing, using robots for some health care interactions is a promising way to reduce in-person contact between health care workers and sick patients. However, a key question…

Sponsored • Keeping up with Progress:

While the debate on the added value of robotics and robot-assisted systems has been in full swing for a while now, the demand for robotic surgery throughout Europe’s medical institutions continues…