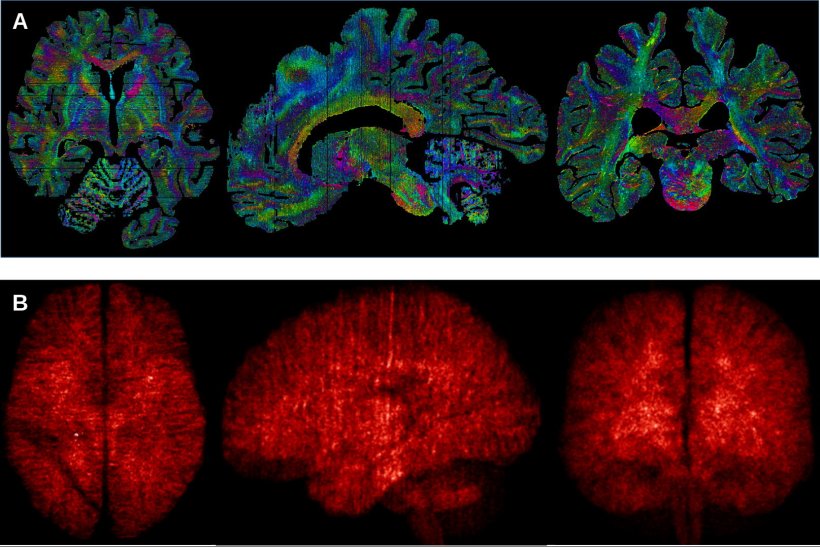 Example of applications using the full range of available resolutions. (A) Shape tensor analysis of the different sections at the 20-μm scale, recombined to the 200-μm space of the blockface image; (B) density maps of blood vessels detected from the background of the 20-μm sections realigned in 3D at 200 μm, projected, and averaged into MNI space at 0.5 mm.

A higher level of detail can be obtained by using microscopy on brains from deceased donors, generally focusing on small brain structures imaged in 2D. Now a team led by scientists from the University of Amsterdam (UvA), have combined MRI and microscopy to produce 3D images of two entire brains with a previously unmatched level of detail. Their findings have been published in the journal Science Advances.

The researchers used an ultra-high field 7 Tesla MRI system, which has a more powerful magnet than the MRI systems routinely used in hospitals. The MRI software was programmed specifically for these studies by the researchers to accommodate the differences between living and preserved tissue. During the cutting of the tissue, each section was photographed individually, so that it could be used later to digitally correct tissue deformation in microscopy sections. Individual brain sections were placed on specially ordered glass slides, and processed with custom-built laboratory equipment.

After digitisation of the individual microscopy slides, new algorithms were created by the researchers to correct for the tissue deformation resulting from the cutting and microscopy processing. After weeks of uninterrupted calculations, the researchers were finally able to create full reconstructions of two individual brains.

Following Open Science principles, the researchers have made their data available free of cost as a service to the field. Scientists and other interested parties from around the world can now travel through the resulting 3D reconstructions of the human brain.