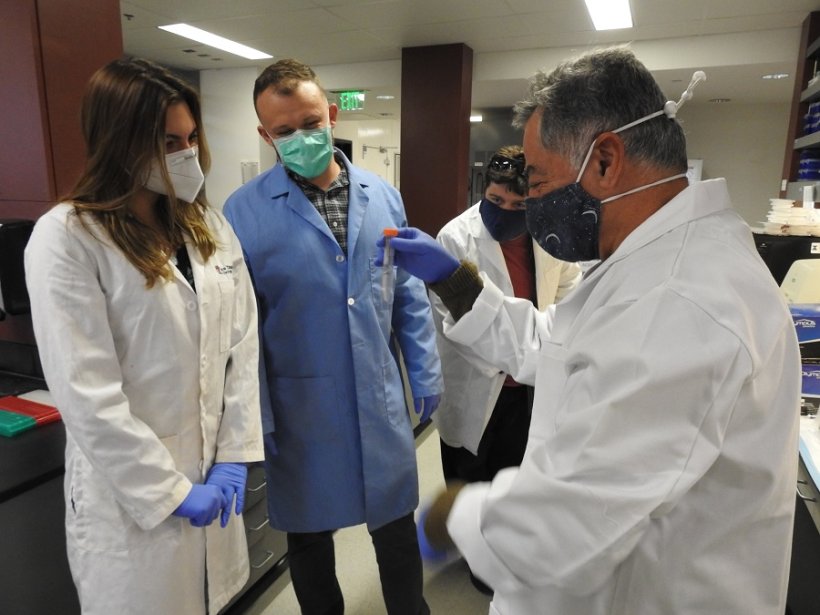 To test whether someone has a strain of Tuberculosis that will no longer respond to standard treatment, clinicians culture samples of mucus from the respiratory tract and barrage them with antibiotics.

"But because TB grows so slowly, that takes weeks," said San Diego State University professor of public health Faramarz Valafar. "In those weeks that patient is going around spreading TB that might be antibiotic-resistant."

He says molecular diagnostic tools are much faster. These test for common genetic markers of drug -resistance and allow for more timely treatment. But TB strains with rare mechanisms of resistance still elude molecular detection.

"They don't have the common genetic markers, but they are resistant," said Valafar. This leads clinicians to incorrectly conclude that standard TB drugs will kill the bacteria. "And so the patient is given the wrong medications and continues to infect others for weeks—sometimes months—before they realize that these drugs aren't working. So we really want to prevent that."

Derek Conkle-Gutierrez, a doctoral student in Valafar's lab, led the search for rare genetic mutations associated with resistance. The researchers obtained samples of M. tuberculosis from seven different countries where antibiotic resistance is common. Culturing the samples revealed that some were indeed drug-resistant, even though molecular diagnostics had failed to catch them.

"First we confirmed that they didn't have the known markers and then we started looking for what other mutations are showing up exclusively in these unexplained resistant isolates," said Conkle-Gutierrez.

The researchers identified one set of rare genetic mutations that may help block the common TB drug kanamycin from interfering with the pathogen's ability to synthesize the proteins it needs, rendering it harmless to the pathogen. Another set of mutations may do the same for the TB drug capreomycin.

"This manuscript identifies potential markers; confirmatory work for the selection of markers for the next generation of more comprehensive molecular diagnostic platforms lies ahead," said Valafar.

"The practice of going in and really looking for these unexplained cases, bringing them in, sequencing them, is a large, expensive project, but it needs to be done in order to find these rare cases so that they don't slip through the cracks and spread, causing more antibiotic resistance that just goes undetected."

As researchers learned during the 20th century, the widespread use of lifesaving antibiotics may have transformed medicine, but bacterial pathogens, like M. tuberculosis, quickly evolved resistance to them. That's because the strains of bacteria that survive the onslaught of these powerful drugs harbor mutations that allow them to persist and multiply in number. This is exacerbated by the use of antibiotics in livestock and for non-bacterial infections in humans, such as those caused by viruses.

Tuberculosis is close to home

It's estimated that about a quarter of the world's population is infected with TB, which has two phases: latent and active. Most people stay in the latent phase because the body's immune system keeps the bacterial load in check. They remain symptom-free and are not contagious. About 10% of those infections convert into active TB. Patients then experience symptoms and can spread the disease to others.

"It is a very important public health concern for the United States as well," said Valafar, who says many people in this country have latent TB. "The fear is that other pulmonary infections like COVID could overwhelm the immune system and trigger TB to go into its active phase. If this happens, TB will become a bigger problem in the Western world as well. We have already seen this in HIV co-infections. Even though HIV is not a pulmonary disease, because it weakens the immune system, it leads to activation of TB. Most patients who have HIV die from TB and not HIV."

Ultimately, an effective vaccine for TB is sorely needed. Until then, improving molecular diagnostics for the detection of antibiotic resistance is important for controlling morbidity. To this end, Valafar's lab has recently received a grant to directly sequence drug-resistant TB from infected lung tissue.

"And that will really break through some barriers that the tuberculosis research community has been facing," he said.

The study is published in the journal Antimicrobial Agents and Chemotherapy.

How the TB bacterium develops rapid resistance to antibiotics

For a slow-growing microbe that multiplies infrequently, Mycobacterium tuberculosis, the pathogen that causes tuberculosis (TB) has long puzzled researchers as to how it develops resistance to…

Peering into the abyss

In May, the World Health Organisation (WHO) warned that bacterial infections might lead to an increasing number of deaths because new resistance mechanisms threaten our ability to treat common…