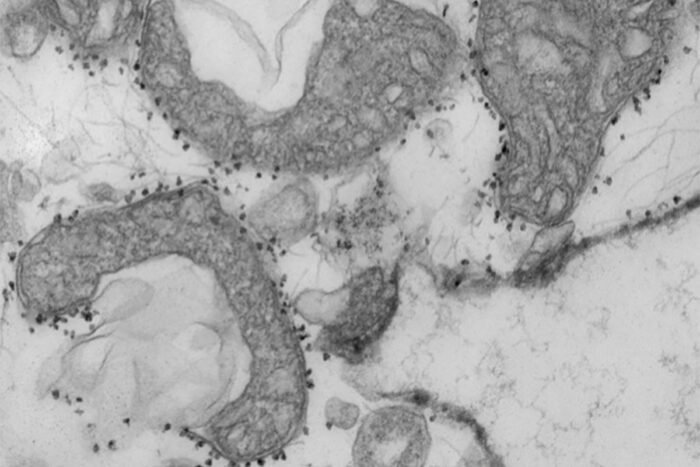 A new study from Washington University School of Medicine in St. Louis suggests that measuring mitochondrial DNA in the blood of patients with Covid-19 can help predict which patients are at highest risk of severe disease, requiring more intensive care. Mitochondrial DNA levels are a measure of tissue damage. Pictured are damaged mitochondria (dark grey areas) released from human lungs. The small dark dots surrounding the mitochondria are magnetic beads that carry antibodies used to isolate and study unhealthy mitochondria that have been released from dying tissues.

Knowledge of a patient’s age and underlying medical conditions can help predict such outcomes, but there are still surprises when younger, seemingly healthier patients suffer severe complications that can lead to death. Now, scientists at Washington University School of Medicine in St. Louis have shown that a relatively simple and rapid blood test can predict — within a day of a hospital admission — which patients with Covid-19 are at highest risk of severe complications or death. The study, published in JCI Insight, involved nearly 100 patients newly admitted to the hospital with Covid-19.

We need to understand why some patients, irrespective of their ages or underlying health in some cases, go into this hyperinflammatory death spiral

The blood test measures levels of mitochondrial DNA, a unique type of DNA molecule that normally resides inside the energy factories of cells. Mitochondrial DNA spilling out of cells and into the bloodstream is a sign that a particular type of violent cell death is taking place in the body. “Doctors need better tools to evaluate the status of Covid-19 patients as early as possible because many of the treatments — such as monoclonal antibodies — are in short supply, and we know that some patients will get better without intensive treatments,” said co-senior author Andrew E. Gelman, PhD, the Jacqueline G. and William E. Maritz Endowed Chair in Immunology and Oncology in the Department of Surgery. “There’s so much we still don’t understand about this disease,” he added. “In particular, we need to understand why some patients, irrespective of their ages or underlying health in some cases, go into this hyperinflammatory death spiral. Our study suggests that tissue damage may be one cause of this spiral, since the mitochondrial DNA that is released is itself an inflammatory molecule.”

The researchers said the test could serve as a way to predict disease severity as well as a tool to better design clinical trials, identifying patients who might, for example, benefit from specific investigational treatments. They also said they would like to evaluate whether the test could serve as a way to monitor the effectiveness of new therapies. Presumably, effective treatments would lower mitochondrial DNA levels. “We will need larger trials to verify what we found in this study, but if we could determine in the first 24 hours of admission whether a patient is likely to need dialysis or intubation or medication to keep their blood pressure from dropping too low, that would change how we triage the patient, and it might change how we manage them much earlier in the disease course,” said co-senior author Hrishikesh S. Kulkarni, MD, an assistant professor of medicine.

News • "Faces" of the disease

According to current studies, the Covid-19 disease which is caused by the SARS-CoV-2 coronavirus comprises at least five different variants. These differ in how the immune system responds to the infection. Researchers from the German Center for Neurodegenerative Diseases (DZNE) and the University of Bonn, together with other experts from Germany, Greece and the Netherlands, present these findings…

The researchers, including co-first authors Davide Scozzi, MD, PhD, a staff scientist, and Marlene Cano, PhD, a postdoctoral research scholar, evaluated 97 patients with Covid-19 at Barnes-Jewish Hospital, measuring their mitochondrial DNA levels on the first day of their hospital stays. They found that mitochondrial DNA levels were much higher in patients who eventually were admitted to the ICU, intubated or died. The researchers found this association held independently of a patient’s age, sex and underlying health conditions. On average, mitochondrial DNA levels were about tenfold higher in patients with Covid-19 who developed severe lung dysfunction or eventually died. Those with elevated levels were almost six times more likely to be intubated, three times more likely to be admitted to the ICU and almost twice as likely to die compared with those with lower levels.

Further, the test predicted outcomes as well as or better than existing markers of inflammation currently measured in patients hospitalized with Covid-19. Most other markers of inflammation measured in patients with Covid-19, including those still under investigation, are general markers of systemic inflammation, rather than inflammation specific to cell death, according to the researchers. “Viruses can cause a type of tissue damage called necrosis that is a violent, inflammatory response to the infection,” Gelman said. “The cell breaks open, releasing the contents, including mitochondrial DNA, which itself drives inflammation. In Covid-19 patients, there has been anecdotal evidence of this type of cell and tissue damage in the lung, heart and kidney. We think it’s possible that measures of mitochondrial DNA in the blood may be an early sign of this type of cell death in vital organs.”

The researchers also emphasized that the test is quick and straightforward to perform in most hospital settings because it uses the same machinery that processes the standard PCR test for Covid-19. The method they developed allows mitochondrial DNA levels to be quantified directly in the blood. Without requiring intermediate steps to extract the DNA from the blood, the technique returned results in less than an hour.

Before they can apply for approval from the Food and Drug Administration (FDA), the scientists will need to verify that the test is accurate in a larger multi-center trial. They have plans to expand the research to more sites.

More than 225,000 tweets with the hashtags #scamdemic and #plandemic led to an “infodemic” of misinformation and disinformation on Twitter during the first year of the pandemic, a new study finds.

Long Covid sufferers have experienced a wider set of symptoms than previously thought including hair loss and sexual dysfunction, new research has found.

Are skin swabs the future of Covid-19 testing?

Skin swabs are "surprisingly effective" at identifying Covid-19 infection, according to new research, offering a route to a non-invasive future for Covid-19 testing. 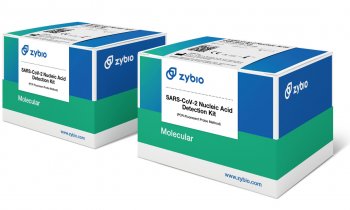