In September, Professor Anne Rompalo MD (Johns Hopkins School of Medicine, Baltimore, MD) an expert in epidemiology and STDs, discussed current and impending POCTs for sexually transmissible infections at the 25th International Symposium on Critical and Point-of-Care Testing of the American Association for Clinical Chemistry (AACC) in San Francisco.

The importance of POCTs is simple: quicker diagnosis leads to faster treatment and the knowledge of having a STD might motivate a patient not to transmit it to others. Any such test must have high levels of sensitivity and specificity, be very easy to use, robust and portable and very fast. Dr Rompalo: ‘Only 10-20% of my patients who are tested and asked to return in a week for their test results do so. As for the rest, I hope any sexually active person seeking a partner doesn’t meet them.’

The ideal situation is hard to achieve

In 2006, the WHO identified benchmarks for an ideal STD POCT, recognising the lack of access to laboratory diagnostic services in less industrialised countries, or those with limited funding. Dr Rompalo has conducted doctor and patient surveys at STD and adolescent out-patient clinics.

In one survey of clinicians primarily treating STD at out-patient clinics in the USA, she found the majority (62%) wanted POC tests for Chlamydia, followed by HIV early seroconversion (14%) and syphilis (8%). Ideally, tests needed to be cheap (US $20-50), have specificity and sensitivity in the 90th percentile, and fast – results in 30 minutes or less. Physicians wanted a urine-stick home test. Adolescents polled in focus groups are strongly in favour of home testing options, for convenience and privacy.

‘Testing outside a lab will become a reality,’ Dr Rompalo predicts. ‘However, for the home tests of the future, and clinic-administered POC tests, quality control is very important. If a hospital offers POC tests, who is going to oversee quality control? How will this be administered? Who will enforce reporting to public health departments?’

Laboratories have very high adherence of reporting STDs, but although legislation requires physicians to report, Dr Rompalo believes the majority forget. She envisions future POC tests as having a chip embedded in the collection medium, which will be triggered when positive outcomes are identified. The module performing the test would then securely communicate this information via the Internet to the appropriate public health department.

The majority of her talk was on existing POC tests for various STDs as well as those currently in development and clinical testing.

Dr Rompalo believes that culture testing for Chlamydia is horrific: a hard, long, and painful process. Nucleic acid amplification tests are the new gold standard but, while their specificity is excellent, sensitivities are not nearly as good as they need to be. Trying to interpret them as positive or negative can be difficult because it may not be easy to tell if a colour strip has changed colours.

Her preference is the cartridge-based assay Cepheid GeneXpert CT/NG – a rapid, real-time nucleic amplified test to detect DNA of Chlamydia trachomatis and Neisseria gonorrhoea –which is FDA cleared for use in female endocervical swabs, patient-collected vaginal swabs, and for male and female urine specimens from symptomatic and asymptomatic patients.

The Xpert is a modular platform for testing samples directly from patients, and requires no hands-on manipulation from specimen-loading until results are available 90 minutes later. It is 97% sensitive and has a specificity of 99.9%.

Because the test takes 1.5 hours, the patient must be told of an appointment in advance and the clinic’s workflow adjusted so that a patient’s sample is collected immediately after arrival, and the patient should be advised that he/she will receive the test results and begin treatment if either disease is confirmed. However, if more patients are routinely scheduled than a module can test simultaneously, multiple testing machines may be needed.

Tests for chlamydia and gonorrhoea

One interesting technology uses microwave accelerated metal enhanced fluorescence (MAMEF). It is a microwave-based lysing system that has ultra rapid and sensitive detection of biomolecules. Dr Rompalo described this as similar to taking a kernel of corn, zapping it, and having it break up like popcorn.

The system utilises a glass or plastic surface, gold metal, and an anchor probe (a fluorescent probe specific to the target). Pieces of Chlamydia DNA placed on the plate are hit with low energy similar to energy in a cell phone. When Chlamydia is recognised, the fluorescence close to the metal gets excited, and this enhanced fluorescence is what is read. Recent testing achieved 82% sensitivity and 91% specificity. The machine will cost about US $2,500, and each actual 10-minute test about US $1.50.

A similar test using MAMEF-based detection is being developed for gonorrhoea. Not only is a rapid test needed, but also one to detect the type of the strain and gonorrhoea-resistance markers. Due to the increase in antibiotic-resistant gonorrhoea strains, it is important at the outset not to prescribe antibiotics that will be ineffective.

Dr Rompalo considers the Atlas Velox TM System is very promising. Disposable cards are used, all reagents are stabilised on the card, and test results take 20 minutes. The portable, small-footprint test processor, with no fragile optical sensors, will be good for field use.

Once a user adds a sample to a testing card, DNA extraction, PCR amplification, and detection of the target are all performed automatically by the system. An electrochemical label released from the probe is hybridised to the target by the nuclease enzyme. The nuclease is double-strand specific, so no label is released in the absence of a target. Voltage is applied to a carbon electrode. At a known potential, the electrochemical label oxidises, generating a measurable current. Reports are produced.

For Herpes Simplex 1-2 (HSV), the ‘hot’ development is ISO AMP HSV POC. Testing using genital swabs has shown 97.1% sensitivity and 93.4% specificity. The test takes 20 minutes and an additional amplification test one hour. Syphilis POC tests have proliferated due to the WHO. Determining if non-treponemal or treponemal antibodies are present and if the infection is active or inactive are important – difficult to determine in clinical examination.

The importance of POC screening tests cannot be underestimated, due to a high level of the disease in Africa, and maternal child transmission. Dr Rompalo recommended two: Trinity Sp Health Check using whole blood serum, with a sensitivity of 98.2% and specificity of 97.3%, and the Chembio Diagnostic Systems’ DDP Syphilis Screen.

The U.S. Centers for Disease Control is currently working with the San Francisco Department of Health and Kaiser Permanente of North Carolina, with both testing five in-development POC syphilis tests. These use whole blood serum or plasma specimens for analysis and the systems are easy-to-use, small and robust. Tests are also easy to analyse. Some have no timer. Several do not need refrigeration or water, so can be used in remote locations as well as in an STD mobile van.

‘POC technologies may be global game-changers,’ Dr Rompalo said, because of places where money or resources are too scarce for expensive tests, or clinic visits are limited, and labs overworked, or not on the premises at all. Globally, numerous STD-infected individuals simply do not know that they have a disease, she stressed.

Teaching POC diagnostics and testing in medical schools worldwide is vital. ‘If physicians and healthcare workers are not willing to use POCs routinely in their practice, the point of this is lost. Sustainable business models are needed worldwide, to take STD POC testing to a larger audience.’

As COVID-19 continues to spread, bottlenecks in supplies and laboratory personnel have led to long waiting times for results in some areas. In a new study, University of Illinois, Urbana-Champaign…

European photonics scientists are developing an ultrasensitive laser sensor that detects coronavirus at the earliest point of infection from a saliva or nasal swab in minutes. 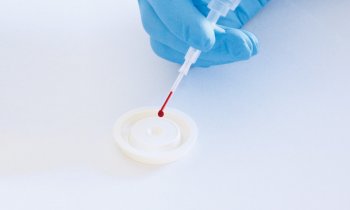 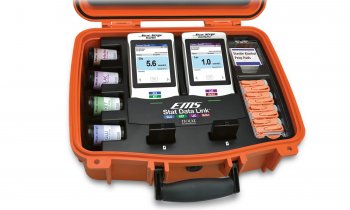