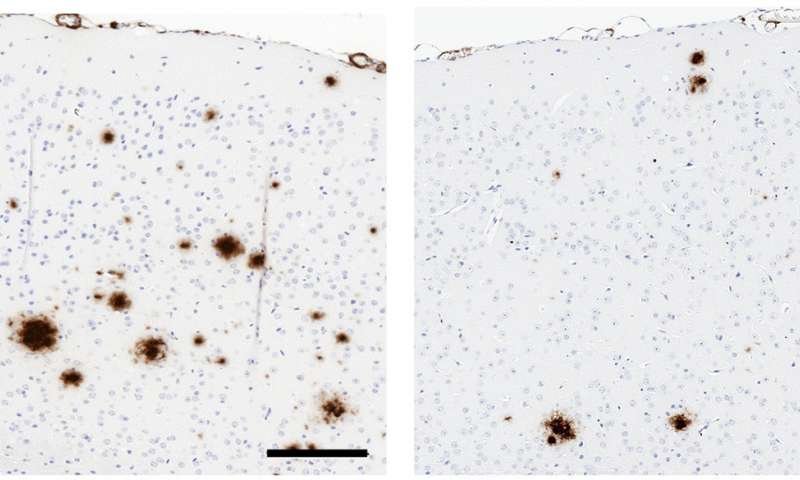 Compared to a control (left), a soluble version of TLR5 (right) reduces the formation of amyloid plaques (brown) in the brains of mice that produce large amounts of human β-amyloid.

Alzheimer's disease is characterized by the formation of amyloid plaques containing aggregates of a toxic protein fragment called β-amyloid that causes nerve cells in the brain to degenerate and die. The body's immune system can influence the progression of Alzheimer's disease by, on the one hand, reducing the buildup of β-amyloid or, on the other, responding to neuronal damage by inducing inflammation that can lead to further neurodegeneration.

Toll-like receptors (TLRs) are a family of proteins on the surface of immune cells that recognize molecules released by pathogens or damaged cells and then initiate an appropriate immune response. A team of researchers at the University of Florida led by Paramita Chakrabarty and Todd E. Golde found that the brains of Alzheimer's disease patients had more TLRs, partly due to an increase in the number of specialized brain immune cells known as microglia.

The researchers hypothesized that untethering some of these TLRs from the surface of microglia could reduce the formation of amyloid plaques. These soluble TLRs might act as "decoy receptors" that bind to β-amyloid and limit its aggregation without initiating cellular signaling pathways that could lead to inflammation.

Chakrabarty and colleagues found that soluble versions of one TLR in particular—TLR5—could prevent or even reverse the formation of amyloid plaques in mice that produce large amounts of human β-amyloid. "This mouse model is well recognized as a primary model for Alzheimer-type amyloid plaque deposition, but it does not recapitulate the entire Alzheimer's neurodegenerative cascade," says Chakrabarty. "Therefore, the potential of soluble TLR5 in dampening immune activation and related neurotoxic pathways needs to be further explored in multiple models of Alzheimer's disease."

The researchers determined that soluble TLR5 could bind to β-amyloid aggregates and enhance their uptake into microglia. It also reduced the ability of β-amyloid to kill neurons cultured in the laboratory. "By directly interacting with β-amyloid and attenuating β-amyloid levels in mice, the soluble TLR5 decoy receptor represents a novel and potentially safe class of immunomodulatory agents for Alzheimer's disease," says Golde.