Chronic epididymitis causing obstructive infertility. The epididymis is enlarged and hyperemic. Obstruction is demonstrated by presence of dilated rete testis with intratesticular spermatoceles.

Multiparametric (MP) ultrasound is the imaging modality of choice to evaluate findings that, when crosschecked with patient history and physical and laboratory examinations, can help identify potential causes of infertility in men. ‘The presence and site of an obstruction of the seminal tract, testicular volume and characteristics, cryptochidism – absence of one or both testes – varicoceles and focal lesions can all be assessed with MP ultrasound,’ said Michele Bertolotto, Associate Professor of Radiology at the University of Trieste, Italy.

The examination must be performed carefully to evaluate size, echogenicity and echotexture of testes; size and morphology of the epididymis; and evaluation of the vas deference, prostate, seminal vesicles and ejaculatory ducts. The best way to evaluate volume of testicles is possibly using the Lambert formula, according to Bertolotto.

In patients with testicular causes for infertility, MP ultrasound enables to evaluate cryptorchidism, and to pick changes in the testicular parenchyma resulting from chromosome abnormalities, orchitides and ischemic disease. In cryptorchidism, the modality helps identify the testes at the level of the inguinal canal and also sometimes at the level of the abdomen. In some instances, MRI may help better identify cryptorchidism because of high signal intensity on T2 weighted images and diffusion-weighted images. However, radiologists must remember that when the testis is markedly hypothrophic, signal intensity in diffusion-weighted imaging is reduced. ‘Sometimes findings are more visible on ultrasound than MRI,’ he pointed out.

MP ultrasound can also show obstruction in vas deferens and seminal vesicles, helping among others to recognise agenesis, a rare malformation commonly associated with other abnormalities, such as absence of a vas deferens or absence of a kidney. Obstruction in the ejaculatory ducts may be caused by stenosis, stones or cysts, which can also be clearly shown by ultrasound. 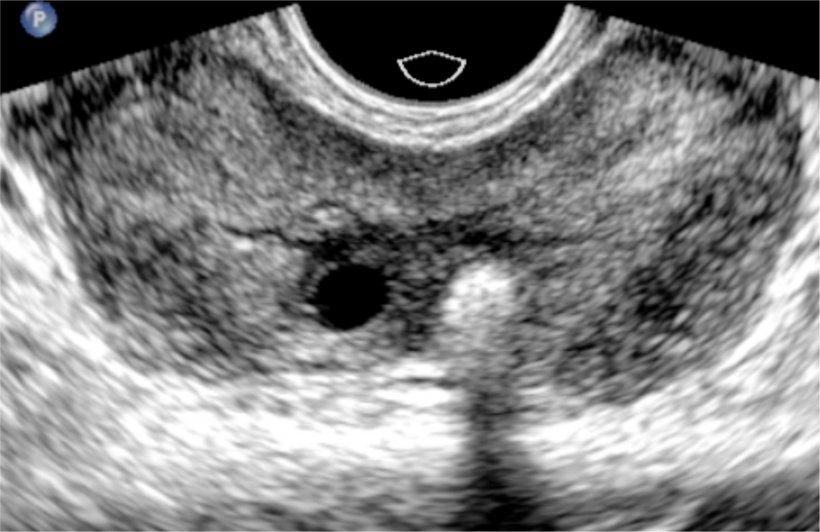 Azoospermia caused by obstruction at the level of the ejaculatory ducts. The right duct is dilated, due to distal stenosis (not shown). The left duct is obstructed by a stone.

Varicoceles are varicose veins of the testicle and scrotum that may cause pain, testicular atrophy or shrinkage, or fertility problems. Varicoceles are a common urological problem and are often detected incidentally. The disease affects about 10 percent of all men and 30 percent of men among infertile couples; but the condition also can be corrected. ‘Varicoceles are the commonest potentially correctable cause for men’s infertility. However there is a lot of confusion in the literature about how to perform the corresponding ultrasound examination and report it,’ he said.

Earlier this year, the Scrotal and Penile Imaging Working Group of the European Society of Urogenital Radiology (ESUR-SPIWG) has released guidelines and recommendations on how to perform MP ultrasound for varicoceles. The publication details how the examination should be performed in supine and erect position, at rest and during Valsalva. ‘Bilateral, grey scale, colour and spectral analysis should be used. Testicular and size of the largest vein should be measured; reflux is considered pathological when longer than two seconds,’ Bertolotto said.

Physicians should be aware that infertility is a risk factor for developing testicular tumours, but they must also know that the majority of focal lesions discovered with ultrasound are benign or non-neoplastic

Reporting should mention testis volume, echogenicity and echotexture; abnormalities; presence of varices; diameter of the largest vein, and changes of flow at colour and spectral Doppler, according to the patient’s position. It is not mandatory to classify varicoceles, but when it is, the Sarteschi’s grading should be used, as it is the most complete and widely used classification in Europe.

When performing MP ultrasound for infertility, radiologists will often find incidentally impalpable focal lesions, which most of the time are benign, Bertolotto stressed. ‘Physicians should be aware that infertility is a risk factor for developing testicular tumours, but they must also know that the majority of focal lesions discovered with ultrasound are benign or non-neoplastic. Therefore,’ he concluded, ‘a conservative approach should be proposed initially.’

Michele Bertolotto is Associate Professor at the Department of Radiology, University of Trieste, Italy. Bertolotto was born in Genoa, Italy. He has been working at the department of Radiology of the University of Trieste since 1996. He currently devotes the majority of his time to clinical practice as senior consultant in genitourinary radiology. His research activity concerns several fields of diagnostic imaging. Contributions are mainly on abdominal and genitourinary radiology. Bertolotto has several commitments in the European Society of Radiology. He is currently serving as ESUR secretary/treasurer.

The appearance of ovarian lesions on ultrasound is an effective predictor of cancer risk that can help women avoid unnecessary surgery.