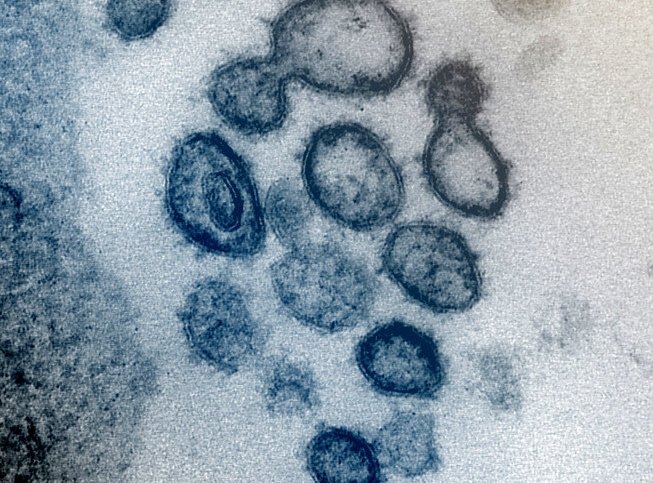 This transmission electron microscope image shows SARS-CoV-2 , the virus that causes COVID-19, isolated from a patient in the US. Virus particles are shown emerging from the surface of cells cultured in the lab. The spikes on the outer edge of the virus particles give coronaviruses their name, crown-like.

The findings by Imperial College London and market research firm Ipsos Mori also suggest the loss of antibodies was slower in 18-24 year-olds compared to those aged 75 and over. Overall, samples from hundreds of thousands of people across England between mid-June and late September showed the prevalence of virus antibodies fell by more than a quarter. The research, commissioned by the British government and published Tuesday by Imperial, indicates people's immune response to COVID-19 reduces over time following infection. James Bethell, a junior health minister, called it "a critical piece of research, helping us to understand the nature of COVID-19 antibodies over time".

But scientists involved cautioned that a great deal remains unknown about people's long-term antibody response to the virus. "It remains unclear what level of immunity antibodies provide, or for how long this immunity lasts," said Paul Elliott, of Imperial's School of Public Health. The study involved 365,000 randomly-selected adults administering at home three rounds of finger prick tests for coronavirus antibodies between June 20 and September 28.

This very large study has shown that the proportion of people with detectable antibodies is falling over time.

The results showed the number of people with antibodies fell by 26.5 percent over the approximate three-month period. Scaled up to a nationwide level, it meant the proportion of the English population with antibodies dropped from 6.0 percent to 4.4 percent, according to the study. The decline coincided with the prevalence of the virus falling dramatically across England—and the rest of Britain—following a months-long national shutdown which was eased over the summer. However, the research found the number of health care workers testing positive for antibodies did not change over time, potentially reflecting repeated, or higher initial, exposure to the virus.

"This very large study has shown that the proportion of people with detectable antibodies is falling over time," said Helen Ward, one of the lead authors. "We don't yet know whether this will leave these people at risk of reinfection with the virus that causes COVID-19, but it is essential that everyone continues to follow guidance to reduce the risk to themselves and others."

Was the coronavirus engineered in a lab? Experts cast doubt on new analysis

Research presented in a new preprint suggests that SARS-CoV-2 might have been artificially created in a laboratory. Experts from Würzburg have reviewed the paper – and remain unconvinced.