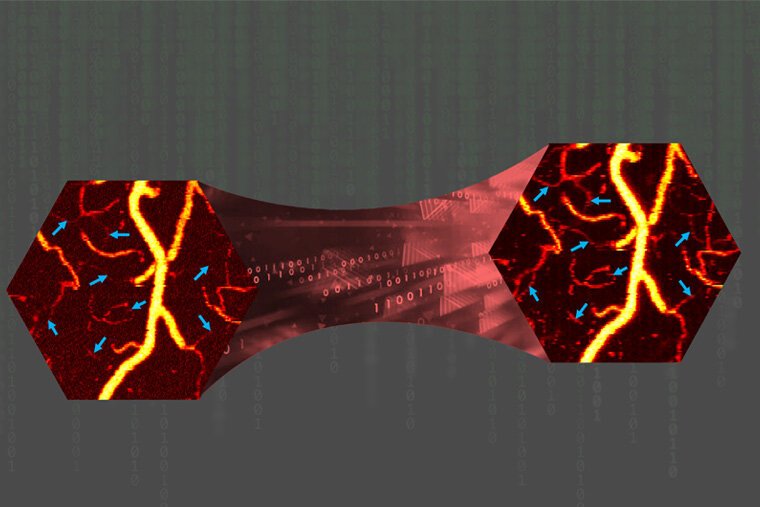 On the left is a noisy, low-fluence photoacoustic microscopy image of blood vessels. By using machine learning, represented as a bridge, the team was able to create a denoised image, pictured on the right.

Song Hu, associate professor of biomedical engineering, and members of his lab devised this new method using a machine learning-based image processing technique, called sparse coding, to remove the noise from PAM images of vessel structure, oxygen saturation and blood flow in a mouse brain. Results of the work were published online in IEEE Transactions on Medical Imaging.

To acquire such images, the researchers need a dense sampling of data, which requires a high laser pulse repetition rate that may raise safety concerns. Reducing the laser pulse energy, however, leads to impaired image quality and inaccurate measurement of blood oxygenation and flow. That's where Zhuoying Wang, a doctoral student in Hu's lab and first author of the paper, brought in sparse coding, a type of machine learning often used in image processing that doesn't need a ground truth on which to train, to improve the image quality and quantitative accuracy while using low laser doses.

The team applied the technique to images of blood hemoglobin concentration, oxygenation and flow in a mouse brain at both normal and reduced energy levels. Their two-step approach performed very well, significantly reducing the noise and achieving similar image quality that was previously only possible with five times higher laser energy.

"In the first step of our approach, sparse coding separated the vascular signals from noise in the cross-sectional scans acquired at different tissue locations, called B-scans, because the noise is less sparse than the signals," Wang said. "Then we applied the same sparse coding strategy on the projection image formed by denoised B-scans in the second step to further suppress the background noise."

Hu said while machine learning has been previously used to denoise photoacoustic images, their two-step method is a step ahead. "Our approach allows us to remove the noise and leave the signal intact," Hu said. "It not only provides higher visibility of the microvessels but also preserves the signal presentation to give us the opportunity to do quantitative imaging."

While this is the initial demonstration of what these machine learning tools can do, Hu said it shows the importance of advanced computational tools in imaging in general and in photoacoustic microscopy in particular.

"The five-times reduction in laser energy is promising, but we think we could do more with follow-up advances, not only to reduce the laser energy but also to improve the temporal resolution, or how fast we can take the image without losing resolution and spatial coverage," he said.