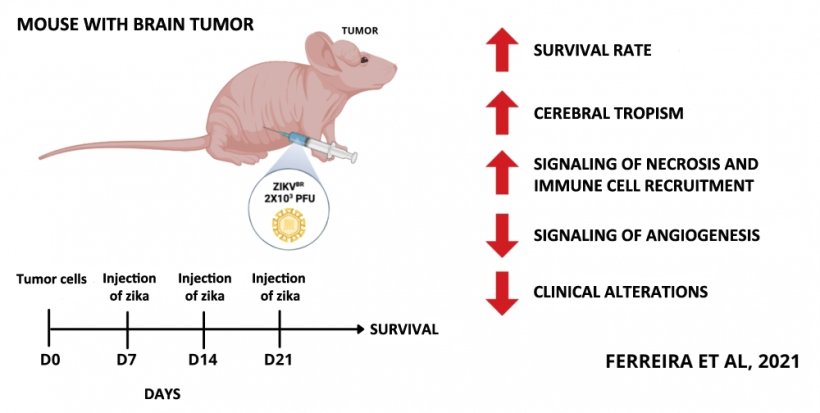 Injections of zika virus into mice with brain tumors destroyed the cancer without causing neurological damage or injuring other organs, and increased the animals’ survival rate

In a study conducted at the University of São Paulo’s Human Genome and Stem Cell Research Center (HUG-CELL) in Brazil, serial systemic injections of zika virus into mice with brain tumors destroyed the cancer without causing neurological damage or injuring other organs, and increased the animals’ survival rate.

The scientists also injected zika into cerebral organoids, brain-like organs created in vitro using stem cells. The virus not only prevented progression of the tumors but actually reduced their size.

In both the mice and the organoids, cytokines (proteins that regulate the immune response) suppressed tumor growth after treatment, and defense cells migrated to the brain region affected by the tumor, alerting the immune system to its existence.

These results, reported in an article published in a special issue of the journal Viruses, confirm the efficacy and safety of treatment with zika in both models, opening up prospects for the use of virotherapy to treat central nervous system tumors. 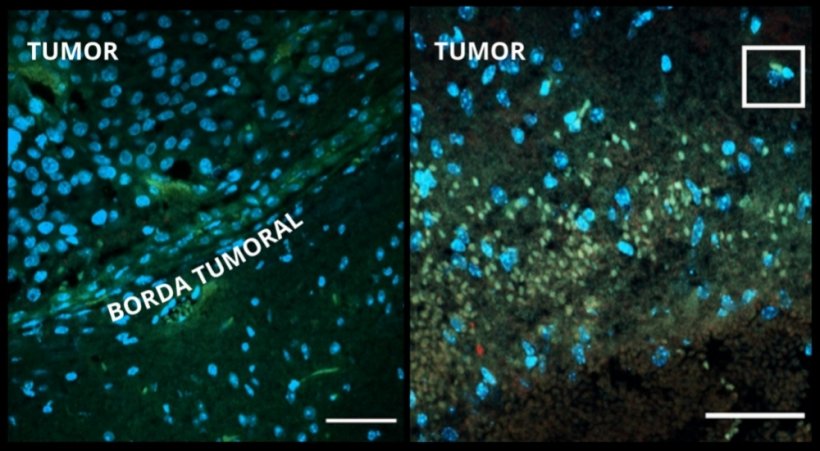 Some 11,000 new cases of brain cancer were registered in Brazil in 2020, of which about 5,200 were in women, according to the National Cancer Institute (INCA).

“One of the key points, confirming previous research, was recruitment of the immune system, which assured a good response to the treatment. Both viral action pathways are very important, enabling the virus to act on a larger number of tumors than we initially foresaw,” said Mayana Zatz, a professor at the Institute of Biosciences (IB-USP) and principal investigator for HUG-CELL, a Research, Innovation and Dissemination Center (RIDC) funded by FAPESP.

Scientists at HUG-CELL had already shown that zika virus can infect and destroy central nervous system tumor cells in a study involving mice published in 2018, and a study involving dogs published in 2020. They were the first to discover that Brazilian zika can be an effective agent to treat aggressive forms of embryonal central nervous system tumors, including medulloblastoma. The therapies available for these tumors, which usually manifest in children, are rarely effective and have severe side effects, impairing the patient’s quality of life.

This latest study confirms that the approach is safe and efficacious. “In any attempt at treatment, you need to know the dosage and administration route. In our study, three doses of systemic intraperitoneal injections of zika at seven-day intervals produced promising results in the models,” said Raiane Ferreira, first author of the article. Ferreira has a doctoral scholarship from FAPESP.

An epidemic of zika fever began in Brazil and affected other countries in the Americas from April 2015 to November 2016. Most of the cases occurred in Brazil, partly owing to the widespread presence of the mosquito Aedes aegypti, which transmits both zika and dengue.

Although zika is usually asymptomatic, research has shown a link between this disease and the development of neurological complications such as Guillain-Barré syndrome and meningitis in adults, and congenital malformations such as microcephaly in newborns.

A significant number of women infected by zika had babies with congenital zika syndrome, mostly in the Northeast region. According to the Brazilian Ministry of Health, 3,423 babies were born with the syndrome between 2015 and 2020.

Zatz collected genetic material on a visit to the Northeast when the group was starting their research. “Neural progenitor cells contribute to the formation of the brain and central nervous system. We collected samples from discordant twins, only one of whom had microcephaly. We bred cell lines from these progenitors in the lab. We then infected them with zika to find out how the virus behaved. That led to the idea of testing it on brain tumors, which are rich in this type of cell,” Zatz recalled.

The researchers worked with BALB/c nude mice, a type of laboratory animal that is hairless, lacks a normal thymus gland, and has a defective immune system because of a genetic mutation. In particular, nude mice are deficient in T lymphocytes and are often used in cancer research because they do not reject tumor cells.

The viral load per inoculation was 2,000 plaque-forming units (PFU) of zika. The first step was to analyze the safety of the treatment by applying the virus directly to the brains of the tumor-bearing animals. The effect was positive, but tumor growth resumed after 21 days.

The researchers then tested serial intracerebroventricular (ICV) injections in mice infected with the same viral load, which displayed high virulence and viremia, losing a significant amount of weight and surviving for only four weeks. The control group remained alive and well, without clinical changes.

Next, they injected three doses of the virus intraperitoneally, with the same intervals between doses. The effects were positive: the mice continued to feed and lost no weight, maintaining good clinical conditions.

In an experiment designed to analyze the tropism of zika virus, i.e., its preference for infecting a particular tissue, determined in part by interaction with receptors in the brain or tumor, the scientists injected tumor cells into the flank of each mouse and found that the virus did not interact with them. No tumor remission was observed, suggesting that zika interacted preferentially with the central nervous system.

“Once we had confirmed that the treatment was safe and that viral tropism focused on the brain, we began the three intraperitoneal injections at seven-day intervals and observed the results,” Ferreira said.

In the case of brain tumors, the serial injections efficiently destroyed them without neurological damage or injury to other organs, while also extending survival time.

Brain organoids were early-stage (26 days) and infected with zika at 2,000 PFU seven days after tumor cell addition. The tumor cells rapidly attached and started to spread in the organoids. The outcome was that viral infection of the tumor cells halted progression of the disease, confirming zika’s intense oncolytic effect. An oncolytic virus infects and breaks down cancer cells but not normal cells.

Similarly positive results were obtained with embryonal central nervous system tumor cells, but the authors of the article note that more investigation is required to confirm the selectivity of the virus in these cases.

According to Zatz, a new stage of the research has now begun, involving the recruitment of dogs with brain tumors. The proposal is to work with animals of different breeds and sizes. “Dogs are extremely important models before we start thinking of tests involving human patients,” she said. “They have tumors that closely resemble human tumors and a preserved immune system. It will be possible to analyze different types of tumor.”

The exchange of a single amino acid building block in a metabolic enzyme can lead to cancer. In addition, it can impair the immune system. It thus blocks the body’s immune response in the battle…

Canadian researchers have developed a new method of killing brain cancer cells while preserving the tissue around it. A remarkable side-benefit: chemotherapy of the cancer suddenly becomes possible.