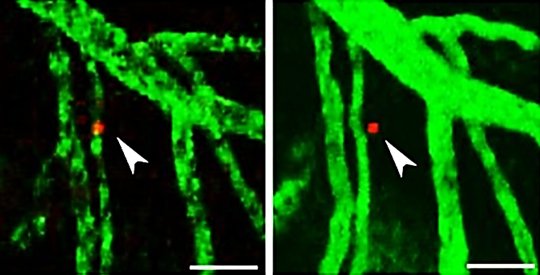 Using a special microscopy technique, scientists can observe single lymphoma cells (stained red) in the living brain of a mouse over a longer period of time. After 24 hours, the lymphoma cell has migrated from the blood vessel into the brain tissue (right).

Lymphomas of the central nervous system (CNS) are a rare and very aggressive form of lymph gland cancer. Patients with secondary CNS lymphomas in particular have a poor prognosis. These CNS lymphomas are metastatic lymphomas that first occur in other parts of the body, such as the spleen. Up to now, it was largely unclear how lymphoma cells enter the brain and become lodged there. "We have now demonstrated that inflammatory processes in the brain play a key role," explained Mathias Heikenwälder from the German Cancer Research Center (DKFZ). In collaboration with colleagues from the Helmholtz Center Munich and TU Munich, Heikenwälder and his team managed to discover the underlying cell biology mechanisms.

An important factor in connection with chronical inflammation in the brain is NF-kappaB. This transcription factor determines which genes are active in a cell and plays an important role in regulation of the immune response. Moreover, there are increasing indications that NF-kappaB and its signaling pathway are also important in connection with CNS lymphomas.

In order to examine inflammatory processes in the brain, the researchers bred genetically modified mice in which NF-kappaB is permanently active in the CNS. "Very early on, these animals develop inflammation in the brain. We also find such inflammatory reactions in brains from lymphoma patients whose tissues we've examined." Heikenwälder explained.

His team injected lymphoma cells into these animals and the rodents did in fact develop metastatic lymphomas in the CNS. This did not happen in mice without chronic NF-kappaB activation. "Using a special microscopy technique, we observed that the lymphoma cells enter the brain from the blood vessels in normal mice too. However, in these animals, they do not remain in the brain; instead, they go back into the peripheral blood vessels. In the genetically modified rodents, the lymphoma cells that have entered the brain remain there. So we wanted to know what keeps them there," Heikenwälder continued.

In a healthy brain without inflammation, a messenger substance ensures that both white blood cells and lymphoma cells leave the brain tissue and go back into the blood vessels. The DKFZ scientists have now identified an important antagonist of this messenger substance in their experiments: the signaling molecule CCL19, the production of which is stimulated by NF-kappaB. "The two messenger substances fight so to speak over where the lymphoma cells go," Heikenwälder explained. "In the event of inflammation with increased NF-kappaB activity, there is also more CCL19, which means it gains the upper hand and keeps the lymphoma cells in the brain." There, they multiply and develop into tumors.

The researchers found a similar situation in human brains. In people affected by primary or secondary brain lymphomas, the NF-kappaB signaling pathway is also activated, so there is more CCL19. As in the mice, the messenger substance is released by special brain cells known as astrocytes.

The DKFZ researchers have thus not only provided the first explanation of how secondary CNS lymphomas arise. "We have also identified inflammatory processes in the brain as potential risk factors for CNS lymphomas," Heikenwälder continued. In their experiment, lymphoma cells in older animals that were not genetically modified behaved exactly like those in young genetically modified animals with chronic inflammation. "Now we can think about whether and how inflammation in the brains of lymphoma patients can be treated to prevent the development of secondary CNS lymphomas."

Canadian researchers have developed a new method of killing brain cancer cells while preserving the tissue around it. A remarkable side-benefit: chemotherapy of the cancer suddenly becomes possible.