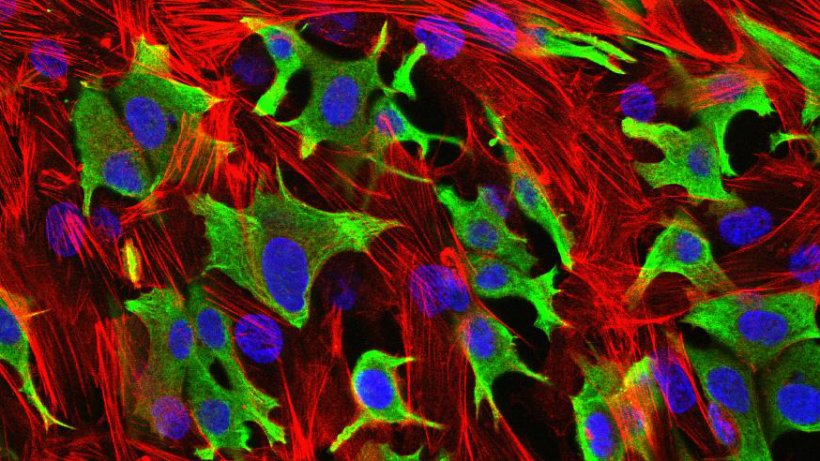 Breast cancer cells invading through a layer of fibroblasts.

Credit: The Institute of Cancer Research

The findings, published in the Annals of Internal Medicine, may seem contrary to conventional wisdom that childbirth is protective against breast cancer. Researchers say childbirth still does become protective, but it can take more than two decades for benefits to emerge. Breast cancer is more common in older women, with the median age of 62 at diagnosis in the United States. Researchers who led the study from the Premenopausal Breast Cancer Collaborative Group identified elevated breast cancer risk after childbirth in women younger than 55.

Other studies have shown an increase in breast cancer risk in younger women after childbirth, but have not had access to information about other factors that might impact risk, such as breastfeeding or family history of breast cancer, researchers said. For their analysis, researchers pooled data from 15 prospective studies from the around the globe that included 889,944 women. In addition to looking at breast cancer risk after childbirth, they also evaluated the impact of other factors, such as breastfeeding and a family history of breast cancer.

They found that, in women 55 years and younger, breast cancer risk peaked about five years after they gave birth, with risk for mothers 80 percent higher compared with women who did not give birth. Twenty-three years after giving birth, women saw their risk level off, and pregnancy started to become protective. The increased risk after childbirth was higher for women who also had a family history of breast cancer or who had a greater number of births or were older at first birth.  The pattern looked the same whether or not women breastfed. “We need to recognize that the traditional risk factors for breast cancer do not always operate the same way at younger ages,” Nichols said.

Breast cancer treatment has evolved. Here’s where we are.

There is no “one size fits all approach” when it comes to treating breast cancer. The disease is made up of several subtypes, and ideally each type should be treated with therapies that target the unique underlying biological problems. Fortunately, for the past 25 years, long-term survival and cure rates have significantly improved for women with breast cancer. This is due in large part to…

A noninvasive way to diagnose endometriosis

Women can suffer for years with the debilitating pain and medical complications of endometriosis without a diagnosis. Now, researchers believe they may be able to diagnose the condition using just…