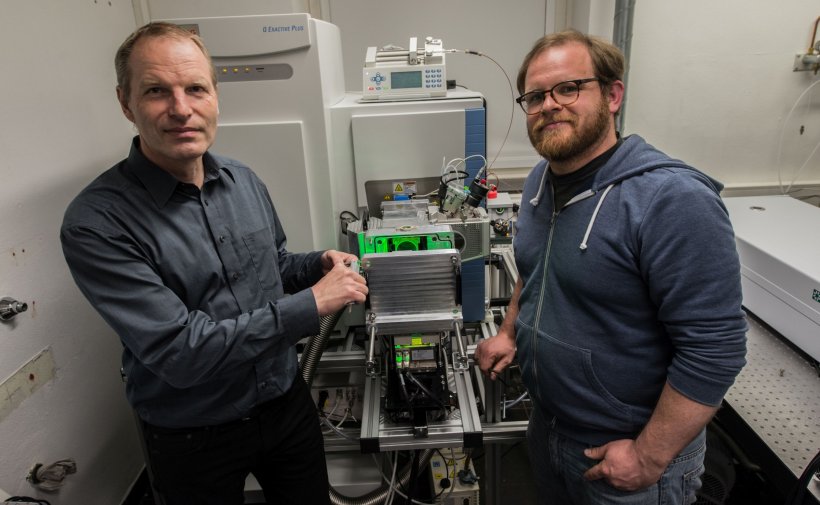 Prof. Klaus Dreisewerd (left) and Dr. Jens Soltwisch in 2017 during the installation of the mass spectrometer funded by the German Research Foundation at the Institute of Hygiene.

The development of mass spectrometry (MS) methods – those which define the chemical composition of cells – represented a further milestone for research in the field of cell biology. In the latest issue of the journal Nature Methods, the working group headed by Prof. Klaus Dreisewerd and Dr. Jens Soltwisch from the Institute of Hygiene at the University of Münster present a method which has improved the spatial resolution of MALDI mass spectrometry by around one-thousandth of a millimetre.

MALDI stands for matrix-assisted laser desorption/ionisation. What’s so special about the technology which the researchers have named t-MALDI-2 (with ‘t’ standing for transmission mode) is the use of two specially adapted lasers: one of them generates a particularly small focus on the material removed, while the other produces the necessary signal enhancement for many biomolecules by up to several magnitudes – for example, for fat-soluble vitamins such as vitamin D, cholesterol or administered medication.  Information on their precise distribution in cells and tissues can, among other things, help to produce a better understanding of disease and inflammation processes and show new strategies for treating them.

MALDI MS methods define the nature and the composition of molecules on the basis of their characteristic mass, i.e. of their “molecular weight”. This makes it possible to take a sample irradiated by the laser – for example, a thin section of tissue obtained from a biopsy – and simultaneously define often dozens, even hundreds, of different biomolecules in one single measurement. However, up to now the resolution provided by mass spectrometry imaging was well below that of classic optical microscopy. As a result of the introduction of the new t-MALDI-2 technology, it has been possible to noticeably reduce this gap.

“The decisive improvement which our method offers, in comparison with established MALDI imaging methods, is based on the combination and extension of two technical methods previously in use,” explains Dr. Marcel Niehaus, one of the two lead authors of the study. “For one thing, in the transmission geometry we irradiate our samples on the reverse side. This enables us to place high-quality microscope lenses very close to the sample, thus reducing the size of the laser dot. This is different from what is possible, for geometrical reasons, in standard methods – where the samples are irradiated from the direction of the mass analyzer.” However, in the minute areas of the sample which are removed by the laser, there is only an extremely small amount of material available for the subsequent MS measurement. The second decisive step was therefore the use of a method (called MALDI-2) which the researchers had already introduced to the scientific world in 2015 in the Science journal. The effect is that the so-called post-ionization laser produces an increased transfer of the initially uncharged molecules to an ionic form. Only if the molecules have a positive or negative charge are they visible for the mass analyzer.

In their study, the researchers demonstrate the possibilities offered by their technology, taking the fine structures in the cerebellum of a mouse and using kidney cell cultures. “Our method could improve the future understanding of many processes in the body at molecular level,” says Prof. Dreisewerd. “Also, established methods from optical microscopy – for example, fluorescence microscopy – could be merged with mass spectrometry imaging in a ‘multi-modal’ instrument,” he adds, with a view to the future.

SARS-CoV-2 vs the proteome

Scientists from Würzburg and the US have charted the first global atlas of direct interactions between SARS-CoV-2 RNA and human host cells. This may provide a starting point for novel treatments.…