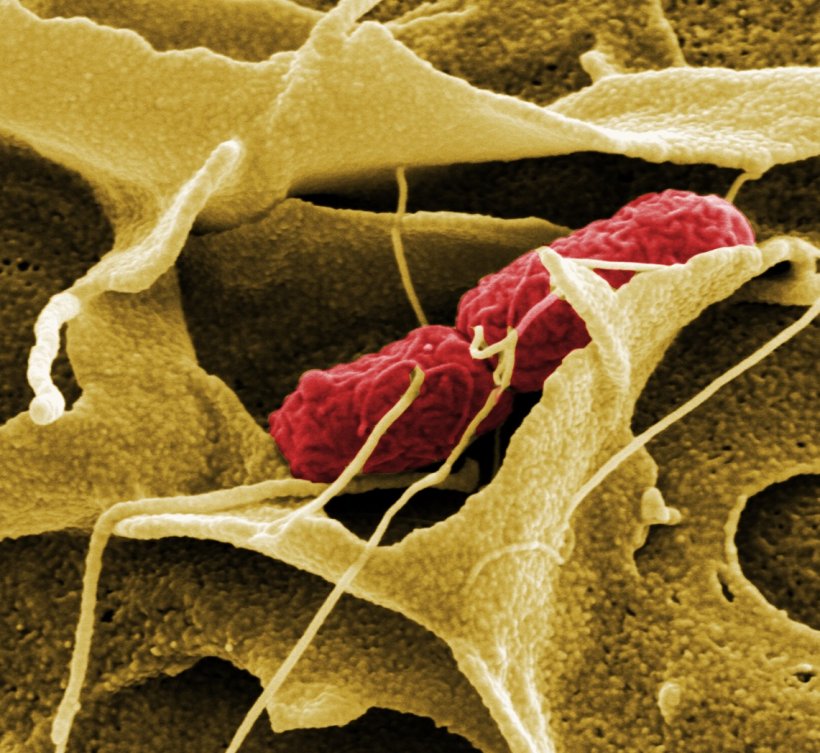 Various bacterial pathogens stimulate their hosts to engulf them during infection processes, allowing the bacteria to gain access to the host cell cytoplasm. This occurs through manipulation of dynamic, but force-bearing cellular protein scaffolds, allowing the pathogens to firmly adhere to, invade or spread within host cells. A protein complex termed WAVE complex that can bind to regulatory switches, so-called small GTPases, has been ascribed a key role in such processes. Scientists of the Helmholtz Centre for Infection Research (HZI) have now dissected the precise molecular mechanisms of WAVE complex activation, occurring in a process involving separable, independent steps. The study paves the way for increasing the understanding of the molecular regulation of motility processes and host-pathogen interactions.

Cells harbour a so-called cytoskeleton, comprising a network of filaments, which can support the plasma membrane, mediate cell shape, and are responsible for proper organelle positioning and vesicle transport. A major component of the cytoskeleton is actin, polymerising into so-called microfilaments and associating into various supra-molecular structures such as networks and bundles. The association of these nanometre-thick filaments with myosin motors enables to generate subcellular forces that are essential for motility processes, shape changes, and interactions between different cell types and organisms. These phenomena also enable fundamental cellular processes such as the phagocytosis and thus removal of cell debris or potentially dangerous agents, but also structures induced during infections with disease-causing pathogens.

Pathogenic bacteria can usurp cellular signalling pathways in order to re-programme host cells and, by that, to allow them to grow on them or invade them without being attacked or killed. For instance, pathogens like Gram-negative Salmonella, Shigella or Yersinia use a syringe-like injection apparatus to deliver virulence factors into their host cells mediating the remodelling of actin cytoskeleton structures. One target complex constitutes the WAVE complex (also WAVE regulatory complex - WRC), now recognised as key factor for the generation of actin filaments. Research in the lab of Prof Klemens Rottner, head of the HZI research group “Molecular Cell Biology” and head of a division at the Zoological Institute of the Technische Universität Braunschweig, aims at unravelling the complex interplay of the host cytoskeleton and bacterial virulence factors. 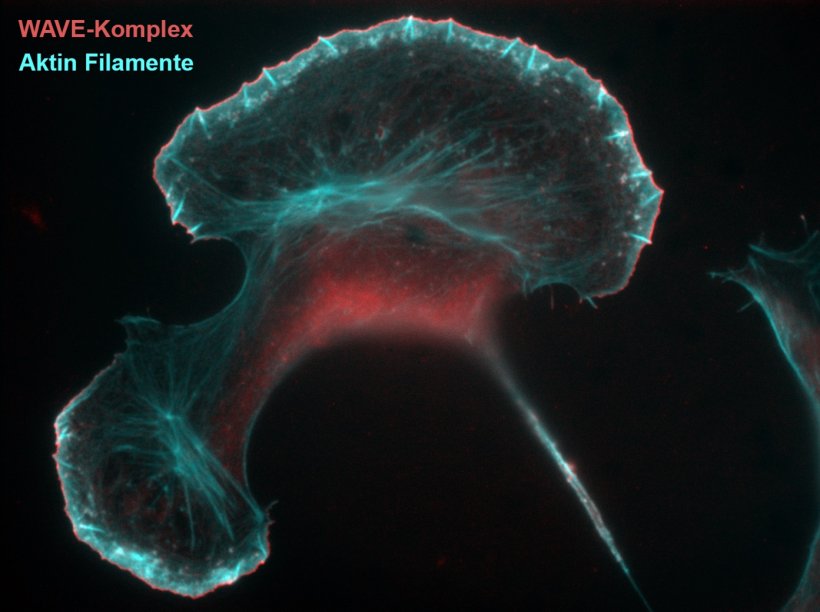 The WAVE-Komplex /red) regulates the formation of catin filaments (cyan blue) at the cell edge.

The scientists could now characterise the precise course of events accompanying the activation of the WAVE complex, which is crucial for the assembly of actin filaments at the cell periphery. The ignition signal constitutes the small GTPase Rac, which by binding to energy-rich GTP (guanosine triphosphate) and its conversion to GDP (guanosine diphosphate) switches between the two states ’On’ and ‘Off’. “The WAVE complex as the key element of Rac-mediated actin assembly is regulated by Rac binding to two independent binding sites,” says Klemens Rottner. However, the relative functions of the two Rac binding sites on the pentameric WAVE complex have so far remained unknown.

For their experiments, which were largely funded by the German Research Foundation, the researchers made use of a cutting edge genome editing technology, now well known as CRISPR/Cas9, which allowed the generation of murine cell lines harbouring WAVE complexes mutated in each individual or both Rac binding sites in combination. “Using these cells, we could uncover the specific function of each binding site in vivo,” says Matthias Schaks, graduate researcher in Rottner’s team. For analyses of the structural intricacies of Rac-WAVE complex interactions, the team also closely collaborated with Prof Wulf Blankenfeldt and colleagues from the “Structure and Function of Proteins” department at HZI.

“We could ultimately show that the first Rac binding site, termed A site, is the major site driving the allosteric activation of the WAVE complex. Binding through this site changes the three-dimensional structure of the complex,” says Klemens Rottner. As opposed to that, the second so-called D site was found to be dispensable for WAVE complex activation, but crucial for its continued cellular function, i.e. the protrusion of plasma membrane leaflets called lamellipodia. The described evolutionarily conserved mechanism could be confirmed to be already present in as early eukaryotes as the slime mold Dictyostelium, which was established in collaboration with colleagues from the CRUK Beatson Institute in Glasgow.

The cell systems that have been developed for the clarification of the described mechanism of WAVE complex regulation can now be employed in infection experiments with various bacterial pathogens, which are known to manipulate the cytoskeleton of their hosts. These will include both Gram-negative bacterial pathogens, such as Salmonella and Shigella, but also Gram-positive bacteria of the genera Listeria and Staphylococcus. Such studies are expected to elucidate the intricate interactions evolved by such pathogens, with the ultimate goal to manipulate them to the benefit of the host.

Researchers have identified an enzyme that is a promising new therapeutic target to combat the dangerous bacterial disease melioidosis.