In new research presented at the Advanced Breast Cancer Fourth International Consensus Conference (ABC 4), researchers have shown that combining targeted drugs with hormone therapy results in a significant increase in the risk of severe or life threatening adverse events (grades 3 and 4). However, the researchers, Dr Matteo Lambertini, a medical oncologist at the Institut Jules Bordet (Brussels, Belgium) and Professor Samuel Martel, a medical oncologist at CISSS Montérégie Centre/Hôpital Charles-Lemoyne, Université de Sherbrooke (Québec, Canada), say that most of these side effects are treatable and potentially preventable, and that the information gained from their research will enable doctors and patients to make more informed choices, as well as providing the basis for further research. 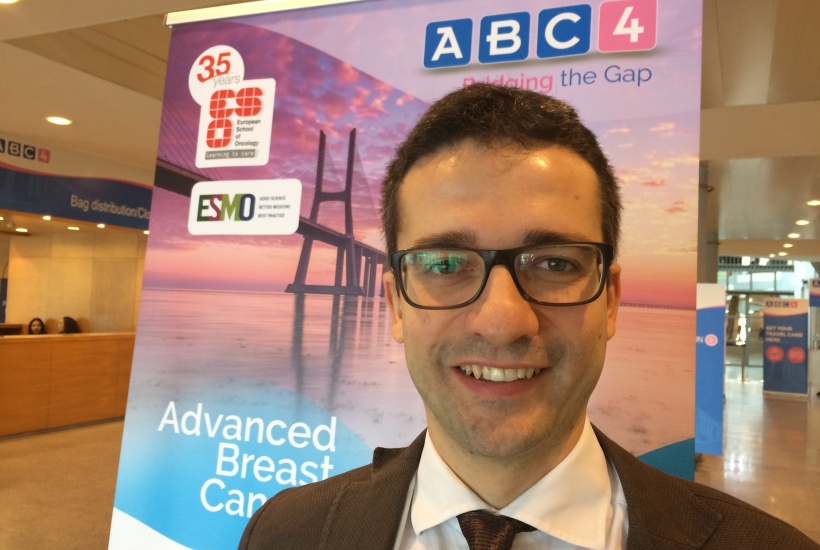 Previous studies have shown that patients with advanced breast cancer live longer without their disease progressing if they are treated with combination therapy, but, until now, it was not known to what extent these combined treatments could lead to more and worse adverse side effects.

Breast cancers that are described as “hormone receptor-positive” have receptors that receive signals from hormones such as oestrogen and progesterone that tell the cancer cells to proliferate. Drugs such as tamoxifen, which blocks the oestrogen receptors, interrupt these hormonal messages. Nowadays, in patients with advanced disease, they are often given in combination with other drugs that target specific molecules important for cancer development; for instance, trastuzumab is a monoclonal antibody targeting breast cancers that produce the protein HER2.

In the study presented, the researchers analysed data from 8,529 patients who had taken part in 16 randomised controlled clinical trials up to July 2017. The patients all had advanced hormone receptor-positive breast cancer that had spread away from the site of the original tumour (metastatic or advanced breast cancer), and the trials investigated hormonal therapies given in combination with targeted drugs, such as CDK4/6, PI3K or mTOR inhibitors, and anti-HER2 agents. The patients had been randomised to receive either the combination therapy or the hormonal therapy alone.

Although these results show that the highest risk was from CDK4/6 inhibitors, Dr Lambertini said: “This is mainly due to the increased risk of developing grade 3 or 4 blood toxicities, mainly neutropaenia. Clinical experience has shown that CDK4/6 inhibitors are better tolerated than mTOR or PI3K inhibitors, and their side effects can be managed relatively easily with early detection and dose delay or reduction, if necessary. However, this cannot be illustrated by our study, which focused only on adverse events registered in the different trials and not on patient-reported outcomes that are a more accurate measure to determine the actual frequency, severity and real impact of anti-cancer treatment on patients’ quality of life.

“There are specific guidelines for the prevention and clinical management of side effects caused by targeted therapies. For example, recently, the prophylactic use of an alcohol-free dexamethasone mouthwash has been shown to reduce the incidence and severity of sore and inflamed mouth in patients treated with everolimus and exemestane, and it is likely to be considered as a new standard of care.”

The benefit provided must be balanced with their added toxicity

The researchers say that doctors and patients should take into account the potential side effects when considering combination therapies. Dr Lambertini said: “The majority of patients with advanced hormone receptor-positive breast cancer are candidates to receive a combined treatment with targeted agents and hormone therapy at some point. Therefore, effective communication between patients and physicians is key. Our meta-analysis helps in having a clearer understanding of the incidence and risk of developing different adverse events. This awareness of potential toxicities may help doctors to guide the counselling of patients when deciding to opt for combination regimens, as well as enabling them to prevent and manage side effects early on during treatment in order to minimise their negative impact on patients’ quality of life. Our findings highlight also the importance of incorporating patient-reported outcomes in oncology trials. Finally, the results of our study can potentially serve as a basis for designing future trials of co-medications for preventing and treating these adverse events; such studies are to be considered a research priority as more patients are likely to be managed with these new treatments in the coming years.”

Chair of the conference, Professor Fatima Cardoso, Director of the Breast Unit of the Champalimaud Cancer Centre in Lisbon, Portugal, said: “This study clearly highlights that combined treatment with endocrine therapy and targeted agents is substantially more toxic than endocrine therapy alone. This is very important when taking decisions in clinical practice. So far, with the exception of anti-HER2 therapies, none of the other agents have been shown to improve survival of patients; therefore, the benefit provided must be balanced with their added toxicity and some patients will be very well treated with endocrine therapy alone. Furthermore, efforts must be made to use the correct quality-of-life tools and patient-reported outcomes to correctly evaluate the impact of new treatments on patients’ lives.”

Menarini Silicon Biosystems announced that a new study has found that using circulating tumor cells (CTCs), a form of liquid biopsy, holds promise as a key tool for developing a staging system that…

Extensive surgery involving mastectomy and removal of several lymph nodes can be safely avoided for more women with some types of breast cancer, if they receive targeted drugs before surgery,…