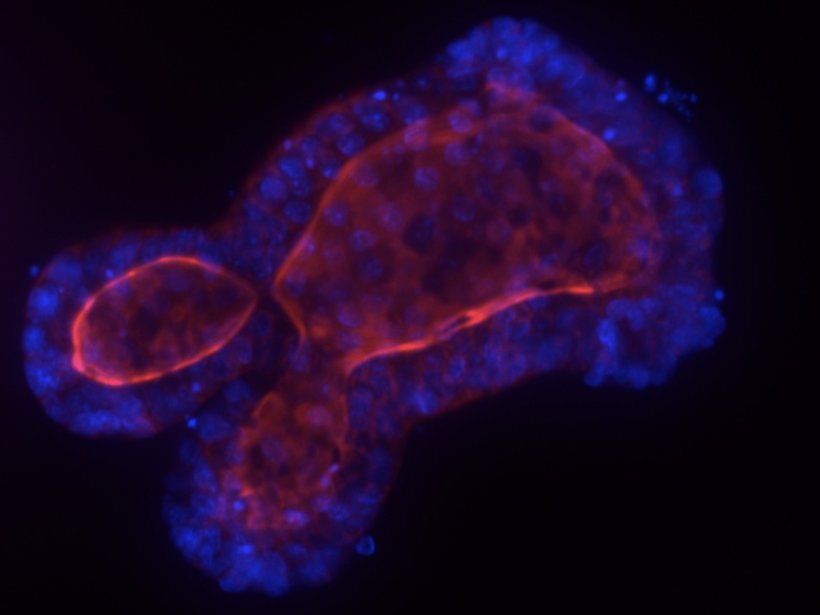 Three-dimensional organoids ("mini tumors") can be grown in the culture dish from tissue samples of colon cancer. Organoids are ideal to test the effectiveness of drugs.

Cells react to external influences via the biochemical reactions of the Wnt signalling pathway. Wnt signals coordinate the development of the early embryo, but also play a role in many pathological processes and in cancer. While researchers initially assumed that an excessively activated Wnt signalling pathway was primarily associated with the development of cancer, more recent results have shown that Wnt activity also affects cancer stem cells: "Wnt signals affect the balance between cells with stem cell characteristics and differentiated cells both in the healthy intestine and in colon cancer," explains Michael Boutros from the German Cancer Research Center (DKFZ) and the Mannheim Medical Faculty of the University of Heidelberg.

In colorectal cancer stem cells, the Wnt signalling pathway is particularly active and responsible for maintaining stem cell characteristics. Depending on the Wnt activity, the cancer cells can switch back and forth between the stem cell state and a differentiated state. This plays a decisive role in the success of treatment: Cancer stem cells are considered responsible for relapses after successful therapy. While the "normal" cancer cells are usually switched off by the drugs, the stem cells survive and represent a reservoir for later cancer relapses.

Due to the high relevance of Wnt activity for the course of the disease, the teams of Michael Boutros and Matthias Ebert from the Mannheim University Medical Centre were now investigating whether certain drugs used for the targeted treatment of colon cancer affect Wnt signals.

Many tumors are stimulated by mutations in the growth-promoting Ras signalling pathway. These overactive Ras signals can be attenuated by drugs called MEK inhibitors. However, these drugs have no effect in colorectal cancer, and the studies of the Heidelberg and Mannheim researchers now provide a possible explanation for this: The scientists showed that MEK inhibitors stimulate Wnt activity in both mice and organoids cultured from tumor cells of colorectal cancer patients.

At the same time, the gene activity of the cancer cells changed to a stem cell-typical pattern. MEK inhibitors reduce the division rate of intestinal tumors, but at the same time cancer stem cells accumulate in the intestinal cancer organoids. "This corresponds exactly to the picture of the "sleeping cancer stem cells" that have been described in many types of cancer for several years," explains Tianzuo Zhan, clinician scientist at both the DKFZ and the Mannheim University Medical Center "These cells survive the therapy and are subsequently responsible for the relapse."

Boutros and his colleagues are now hoping to find out whether the influence of MEK inhibitors on Wnt activity can be blocked with specific drugs.

A team of British and American scientists have discovered a way to slow the growth of breast cancer stem cells in the lab. The study led by Dr Bruno Simões and Professor Rob Clarke from The…

A drug developed by US physician-scientists and chemists speeds up the regeneration of mouse and human blood stem cells after exposure to radiation. If the results can be replicated in humans, the…

Colon cancer is one of the most common forms of cancer in Germany. Prof. Dr. med. Sebastian Zeißig, group leader at the DFG Research Center for Regenerative Therapies Dresden (CRTD) - Cluster of…